LOS ANGELES –  When the American Flag is displayed upside down, it is an internationally recognized symbol of distress notifying the public that “life and property are in extreme danger.” This is not disrespectful to our Flag as it is in full compliance with Section 8 (a) of the United States Flag Code.

Make no mistake, life and property are in extreme danger at the Los Angeles VA where Federal land has been illegally leased to non-Veteran entities for non-Veteran use, and at the peril of tens of thousands of war-injured and impoverished Veterans who have been forced to live homeless and hungry on the dangerous streets of Los Angeles.

In fact, VA Secretary Eric K. Shinseki and his Los Angeles VA director, Donna M. Beiter, have a Federal Judgment entered against them for engaging in nine separate real estate deals at the Los Angeles VA that were adjudicated in U.S. Federal Court by District Judge S. James Otero as “unauthorized by law and therefore void.”

The Los Angeles VA is the most corrupt in the nation under Donna Beiter’s misconduct, malfeasacne and mismanagement,. She has two Federal Judgments entered against her, one for violating a Veteran’s Constitutional Right to Free Speech and the other for illegal use of Federal VA property.

This is also the largest VA in the nation and Los Angeles County is our nation’s capital for homeless Veterans.

To make matters worse, Secretary Shinseki has boasted that he will end Veteran homelessness by next year, yet he Appealed the Federal Judgment that would have opened the unique opportunity to build new housing on VA property, which would greatly diminish the homeless Veteran population in Los Angeles.

Without question, Secretary Shinseki’s selfish Appeal of the iron-clad Judgment is morally and legally indefensible.

Moreover, the Secretary’s unwarranted Appeal is an added burden to the American Taxpayer and it shamefully prolongs the misery and suffering of tens of thousands of disabled and needy Veterans who are forced to live homeless and hungry on the dangerous streets of Los Angeles.

How many disabled and destitute Veterans that belong housed and cared for at the Los Angeles VA but were forced to live in back-alley squalor and on skid row, have either died from malnutrition or exposure, overdosing on VA-distributed drugs, committed suicide or were murdered on the unsafe streets of Los Angles? 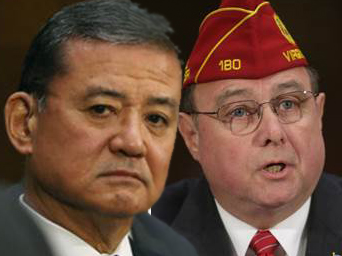 The foregoing notwithstanding, Daniel M. Dellinger, the National Commander of the American Legion has called for the resignation of VA Secretary Shinseki, not because of the Federal Judgment, but because of serious allegations of misconduct and criminal activity at the Phoenix VA and others regarding “wait lists” that could have resulted in the possible deaths of hundreds of Veterans.

True to his bloated self-righteousness, Secretary Shinseki has boasted that he “will not resign” and smugly crows that he “serves at the pleasure of the President.”

Did I mention Secretary Shinseki inappropriately Appealed a Federal Judgment against him for illegal use of Federal VA property in Los Angeles?

Why would anyone believe that this pompous misfit will honor the VA Office of the Inspector General and take “appropriate action” if they rule that VA’s under his entrusted stewardship violated the law?

To him, “appropriate action” is whatever it takes to protect his okole at the expense of others.

Meanwhile, during the recent Senate Hearing regarding Secretary Shinseki’s failed leadership and incompetence, Commander Dellinger complained vociferously about virtually every VA in the nation but was conspicuously silent about the Los Angeles VA.

Remember, these are “allegations” that Commander Dellinger is referencing about other VA’s while the ACLU lawsuit produced a conclusive, no-nonsense Federal Judgment against Secretary Shinseki and co-Defendant Donna Beiter regarding their illegal conduct at the Los Angeles VA. Case No. 11-CV-O4846-SJO (MRWx)

Let there be no misunderstanding, Commander Dellinger knows all about the Federal Judgment against Secretary Shinseki, so why does he refuse to mention anything about it in his press conferences or before the Senate Hearing?

More than five months ago, Vietnam War Veteran Gil Flores, Adjutant for American Legion District 29, Orange County, CA, wrote a letter to Commander Dellinger at the behest of District 29 that encompasses 26 Legion Posts with over 8,000 members.

The December 8 letter to Commander Dellinger (below) is very specific about the Judgment against Secretary Shinseki and the VA’s Appeal of said Judgment. The letter states: “Your leadership is needed and we respectfully request that you stand with us and dutifully direct the VA to drop their Appeal, posthaste.”

Five months later and nary a peep from the normally outspoken National Commander regarding the Federal Judgment against Secretary Shinseki and his Department’s shameful Appeal of it.

How hard is it to announce that either you support or oppose the Judgment and the Appeal?  To remain silent for five months regarding such a basic request on such an important matter from leaders in one of the most respected American Legion Districts in California, is unforgivable.

In the 1960’s during the trying times of the Civil Rights Movement, Dr. Martin Luther King, Jr., proclaimed:  “In the end, we won’t remember the words of our enemies but the silence of our friends.”

Regardless of Commander Dellinger’s disappointing silence, this is a Distress Call for the American Legion’s esteemed national leader to stand up and speak out for our war-injured and deprived Veterans in Los Angeles whose lives are in extreme danger, as is the property that was exclusively deeded on their behalf in 1888 as a National Home for Disabled Veterans.

While Commander Delligner’s request that Secretary Shinseki resign over allegations of misconduct at the Phoenix VA was commendable, now he needs to demand that President Obama fire him over adjudicated misconduct at the Los Angeles VA.

First, I would like to extend a sincere welcome to you on behalf of AL District 29 and its 26 Legion Posts. We hope you will have a fruitful and productive visit here in Orange County, CA.

Secondly, I would like to inform you of a major issue regarding the West Los Angeles Veterans Home which is seriously impacting our homeless and disabled Veterans in Southern California. The issue has to do with the granting of unlawful leases, and the giving away of valuable Veterans land at the Los Angeles National Veterans Home, aka VA Greater Los Angeles Healthcare System on Wilshire Blvd., near Brentwood, CA.

A U.S. District Judge recently entered a Federal Judgment against VA Secretary Eric Shinseki and his Los Angeles executive director, Donna Beiter, for entering into nine “Enhanced Sharing Agreements” (ESA) that are “unauthorized by law, and therefore void.” None of these nine entities are health-related nor do they benefit our disabled and homeless Veterans. (Please see the attached Federal Judgment including the nine non-Veteran entities that have been occupying land deeded exclusively for Veterans housing and care in 1888).

In essence, the Court ruled that the aforementioned leases were unlawful in that they did not benefit Veterans, present and future.

For five and one half years, a group of Veterans calling themselves the “Old Veterans Guard” have kept a vigil outside the Home for 296 consecutive Sundays. The purpose of this gathering is to call attention to what has been going on at the Home, with the major objective being to remove the non-Veteran ESA’s and to keep the Home for Veterans use only.  Needless to say, we were gratified and happy with the Federal Court’s Ruling.

Now, I regret to inform you that the VA, along with UCLA and the Brentwood High School which is situated at the home, has filed an appeal to overturn the ruling. The VA is using government attorneys and tax payer money, to appeal the Judgment, even though the Congressperson who’s District the Home is in, U.S. Representative Henry Waxman, sent Secretary Shinseki a letter requesting that the VA not Appeal. (Attached letter)

To us, this is an outrage and we are calling for the American Legion’s support in our battle to save the Home. To date, only two major VSOs—the Vietnam Veterans of American and the American G.I. Forum have stepped up to the plate in supporting the Veterans impacted by the illegal ESA’s at the National Home.

In brief, major VSOs such as the Legion and the VFW have been silent and out of the picture in this ongoing issue. To say that this is a major disappointment for the Veterans involved in this battle would be an understatement.

Accordingly, on behalf of AL District 29 and our disabled and homeless Veterans who have no voice except from the advocates, I am calling for yours and the Legion’s support to help us in the critical issue.

Dismissing the VA’s unwarranted Appeal and the immediate removal of all nine illegal occupants is paramount to ensure that tens of thousands of disable and homeless in Southern California will always have a safe place to heal from their war injuries, now and in the future.

Your leadership is needed and we respectfully request that you stand with us and dutifully direct the VA to drop their Appeal, posthaste. To do otherwise will have serious ramifications for generations of war-injured Veterans who are depending upon us to do the right thing in their behalf