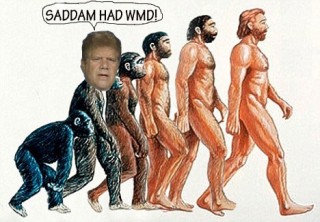 
In a shocking throwback to an earlier stage of human evolution, a man has been discovered who still believes that Saddam Hussein had weapons of mass destruction. University of California scientists report that a Berkley man, Lee Kaplan, has tested genetically and ideologically as a species of neanderthalus politicus previously thought to have gone extinct.


The atavistic relic of a bygone age was displayed on Press TV’s “The Debate” show, where he proceeded to utter a series of barely-intelligible snarls, whoops, and screeches indicating his fervent belief that George Bush and Tony Blair were right, Saddam Hussein really did have weapons of mass destruction, and no amount of proof to the contrary would ever change his mind.

Evolutionary biologists, paleontologists, and neuroscientists alike were stunned by the shocking discovery that a creature like Lee Kaplan could still be wandering around dragging his knuckles in a modern, technologically-advanced city like Berkeley. “It is difficult to understand how a primate subspecies with this level of cognitive deficit could possibly survive in a challenging urban environment,” explained evolutionary biological neuroscientist Dr. Darwin Fish.

“While Lee Kaplan does seem to have a degree of control over a few basic motor skills, including farting out simple AIPAC-supplied talking points on command, his frontal lobe activity is essentially zero,” added cognitive linguistic brain expert Dr. Noam Chimpsky. “It is simply astounding that he has survived all these years without stepping off a cliff or being run over by a bus.”

After extensive testing, Dr. Chimpsky determined that Lee Kaplan is not just cognitively deficient, but that what passes for his brain seems hard-wired for an extremely limited vocabulary. “His linguistic abilities are neurologically restricted to a few simple expressions, like ‘Arab terrorist,’ ‘Arab dictator,’ and ‘Jew hater,” Chimpsky explained. “He is completely unable to process not only abstract thought, but also a long list of critically-important words and expressions including ‘Downing Street Memo,’ ‘yellowcake,’ ‘Plame-gate,’ ‘the facts were fixed around the policy,’ ‘AfterDowningStreet,’ ‘Zelikow’s threat that dare not speak its name,’ ‘the Transparent Cabal,’ and many more.”

In a related discovery, media archeologists at Cal Tech University have found indirect evidence that Lee Kaplan may not be the only surviving relic of the Age of Iraqi WMD. A bizarre, barely-decipherable set of signals from outer space calling itself “Fox News” seems to be targeting an indeterminate number of creatures with similar cognitive impairments. Cryptozoology Professor Cass S. Squatch of Tulane University argues that the existence of these mysterious “Fox Bleeps” indicates that a whole troop of Lee Kaplans may be lurking in obscure nooks and crannies of the North American cultural wasteland.

The possibility worries Rockefeller Institute eugenicist Dr. Abel Danger. “What if they breed?” Dr. Danger asks. “Can you imagine the disastrous consequences of the unchecked reproduction of a viable and ever-growing population of Lee Kaplans?” Other experts, however, downplay the risk. “Lee will never figure out how to breed. He’s not smart enough,” explained reproductive endocrinologist Dr. I. N. Vitro. “And with his looks and his brains, I don’t think anyone is likely to offer to help him.”