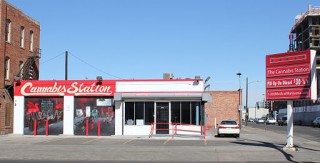 Banks Refuse to do Business with Dispensaries

Owing to recent legalization, recreational marijuana use is a growth industry in both Colorado and Washington State. In Colorado alone, annual turnover is projected to reach $10.2 billion by 2018. Yet owing to archaic federal banking laws, it remains a cash-only industry.

A BBC Business report gives the example of Pinkhouse Blooms. A chain of five marijuana dispensaries grossing over $100,000 a day, they remain a cash-only business. Because no Denver bank will give them a checking account.

Relying on armored cars and armed security guards, owner Elliott Klug uses cash to pay his suppliers and employees – as well as $35,000 in monthly sales tax and $45,000 in state licensing fees.

Although the Obama administration has directed federal attorneys not to prosecute marijuana users, growers, and distributors in states which have legalized marijuana (for recreational and/or medical use), banks that do business with marijuana producers and distributors remain in legal limbo. At present all federally insured banks that accept deposits from “drug dealers” are subject to suspension of their banking license and criminal prosecution under federal drug racketeering laws.

Both the Bank Secrecy Act and the Anti-Money Laundering Act were enacted to prevent money laundering. Ironically they do just the opposite in the eleven states with legal marijuana dispensaries. Cash-only businesses are notoriously susceptible to both tax evasion and money laundering. Without bank records, there’s no audit trail. Federal and state authorities only have the owner’s say-so for the amount of business they take in.

In February the Obama administration issued “guidance” that the Justice Department and FinCEN (under the Treasury Department) is “unlikely” to prosecute banks provided they meeting specified conditions, including reporting suspicious criminal activity to law enforcement. Unfortunately this “guidance” offers no real legal immunity, as all marijuana use is still illegal under federal law.

In 2011 Congressman Jared Polis (D-Colorado) tried to legislate immunity for banks doing business with medical marijuana dispensaries with his proposed Small Business Banking Improvement. The bill died in committee, and it doesn’t appear that similar legislation is forthcoming any time soon. Not if a myopic press release by Senators Charles Grassley and Diane Feinstein, as co-chairs of the Senate Caucus on International Narcotics Control, is anything to go by.

Their joint letter and press release castigate the Obama administration for “assisting those businesses that seek to inject the proceeds of criminal activity into the nation’s financial system.”

Makes you wonder when Feinstein was last in California, the state she supposedly represents. California was the very first state to set up legal marijuana dispensaries in 1996 when voters passed an initiative legalizing marijuana use for medical purposes.

Both Colorado and Washington have suffered major budget difficulties since the 2008 downturn. And in both states, legalizing (and taxing) recreational marijuana use promises a major cash injection for state coffers.

In Colorado, retailers pay a 10% marijuana tax in addition to 2.9% general sales tax to the state. County and city authorities may charge additional tax. In Denver, for example, the total sales tax can reach as much as 21%. This is in addition to a 15% excise tax charged on marijuana as it leaves the cultivation facility.

Washington charges a 25% excise tax on sales at each transaction level: from the producer to the processor, the processor to the retailer and the retailer to the customer. This is in addition to B&O (Business and Occupation) and sales tax all businesses pay. As of July 8, producers will be licensed by the Washington State Liquor Control Board to sell directly to consumers.