Sunday’s Rally will also be in protest of the County of Los Angeles’s retaliation against the Old Veterans Guard (OVG) for its success at helping to expose the land abuse, corruption and cronyism at the Los Angeles VA, as the Department of Public Works will spend $6 million in taxpayer money to shut down the public sidewalk where the OVG has protested for the past six years and will construct a lavish new landscape project to beautify the entryway into Brentwood.

Not only will the OVG be forced from a public sidewalk where we have exercised our First Amendment Right for the past six years (and also had it suppressed), but the homeless Veterans we have been fighting for will be forced to move in order to satisfy the wealth and power of the Brentwood elite, aka, Veterans Park Conservancy, et al, that have manipulated the takeover of Veterans property for their own benefit at the expense of war-injured and impoverished homeless Veterans. 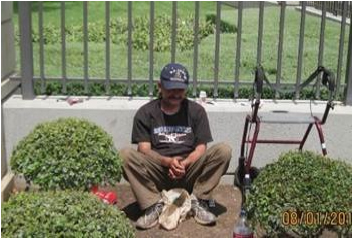 Not content with evicting these impoverished homeless Veterans from their legally deeded property on the “inside” of the VA, now these robber barons are taking away the bushes on the “outside” of the VA to beautify the entryway into the ritzy enclave where they live in multi-million dollar mega-mansions.

This is a special call to Duty and Action for all Veterans and Friends of Veterans to attend Sunday’s Rally as we are truly honored to have Rafer speak in support of this noble cause, and there’s no better or trusted voice than Rafer Johnson.

Rafer’s credentials are impeccable and his lifetime leadership for the greater good are essentially unequaled.

Rafer’s selfless and solidarity support for this noble cause on behalf of disabled and homeless Veterans is consistent with his moral judgment of doing what’s right, so please attend and stand with him for this historic Rally of the Veterans Revolution.

Rafer’s legacy of defending the defenseless and protecting the Civil and Human Rights of those who have no voice, speaks volumes on behalf of our voiceless war-injured and impoverished homeless Veterans who have been forced to live homeless and hungry on skid row and back-alley squalor, instead of being housed and cared for on the very land that was deeded in their behalf in 1888.

Consistent with his lifetime legacy of standing up for the less fortunate, Rafer was instrumental in helping establish and organize the “Special Olympics” that was famously conceived by Eunice Kennedy Shriver, sister of U.S. President John F. Kennedy and U.S Senator Robert F. Kennedy. Rafer is still very active as leader and Chairman of the Southern California Special Olympics.

Rafer served in the National Guard during the Vietnam War era and has been a lifetime champion supporting and defending disabled and homeless Veterans.

He wrote a best-selling book, “The Best That I Can Be,” which is what his whole life has been about …. doing his very best to use his God-given talents to help those who need help in developing their own abilities to become the best that they can be..

This book is a must-read for every child as well as every adult, particularly those who have been entrusted as public servants in all branches of local, state and federal government.

As a leader for truth and justice, Rafer is also opposed to government’s retaliatory effort to silence more the six-years of Sunday Rallies of the Old Veterans Guard, just as he opposed government’s retaliation against Dr. King’s Civil Rights Movement when police used water hoses and dogs to try and silence protesters.

During the Civil Rights Movement, Dr. King said: “I’m not a consensus leader. I don’t determine what is right and wrong by looking at the budget of the Southern Christian Leadership Conference or by taking a Gallup poll of the majority opinion.

On some positions cowardice asks the question, is it safe?

Expediency asks the question, is it politic?

Vanity asks the question, is it popular?

But conscience asks the question, is it right?

And there comes a time when one must take a position that is neither safe, nor politic, nor popular but he must take it because conscience tells him it is right.”

And so it is with Rafer Johnson’s leadership in joining Sunday’s Rally, because his conscience tells him that it is right to stand up for our disabled and homeless Veterans and to be a voice for their safety and well-being.

Dr. King also forewarned: “The hottest place in Hell is reserved for those who remain neutral in times of great moral conflict.”

Make no mistake; this is a moral conflict between justice and injustice, good and bad, right and wrong. 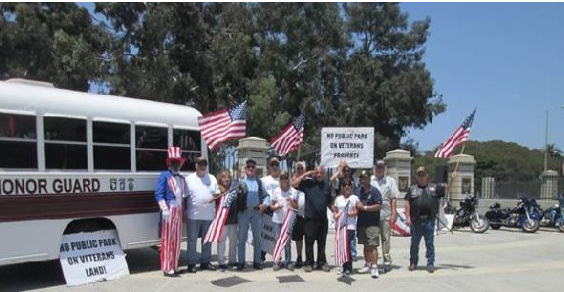 Do the right thing and join Rafer Johnson and Fellow Veterans and Friends of Veterans at Sunday’s 330th consecutive Sunday Rally, 1:00 – 4:00 pm, at the Northeast corner of Wilshire and San Vicente Boulevards, west of the 405 Freeway, adjacent to the community of Brentwood.

Stand with the best this Sunday!