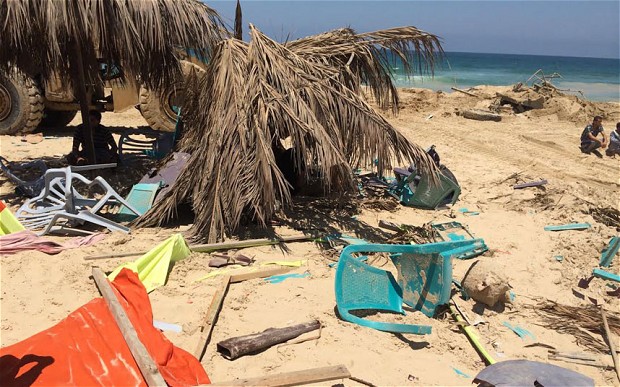 If I were an Arab leader, I would never sign an agreement with Israel. It is normal; we have taken their country.” –  David Ben-Gurion (Polish born Israeli Statesman and Prime Minister (1948-53, 1955-63).

Ode to a dead Palestinian child

Yesterday you were playing with your cousins on this sandy Gaza beach.

You were playing soccer and you had just scored a goal with your makeshift cloth beach ball.

You knew there was danger on the beach but you could  not resist the beach and the cool ocean breeze.

Somehow you could not understand the war around you.

You could not comprehend the hatred of the Zionists toward  your Palestinian brothers and sisters.

You could not comprehend the cruelty of your occupation by  the Israelis.

You could not comprehend the whole concept of hatred and apartheid for your heart was filled with love, joy and laughter.

You loved your mom and crippled Dad but could not quite understand their anguish about your safety.

Surely the Zionists would not want to bomb three little boys playing soccer  on the beach.

Surely they would not be threatened by our laughter and joy.

Surely they would understand our innocent play.

Surely they would not bomb us.

Perhaps American peace laureate Chris Hedges says it best ~ “The incursion and bombardment of Gaza is not about destroying Hamas. It is not about stopping rocket fire into Israel. It is not about achieving peace. The Israeli decision to rain death and destruction on Gaza, to use lethal weapons of the modern battle field on a largely defenseless civilian population is the final phase in the decades long campaign to ethnically cleanse Palestinians ~ it’s not a war, it’s murder.”  See video

And now listen to these angelic children voices as they honor their innocent slain brothers and sisters in Vietnam, Iraq and Afghanistan ~ as well as Gaza and throughout the world with this profound requiem. ( 3 minute Video )