At precisely 8:15 AM on August 6th, 1945 ~ 200,000 people eventually died from an Atomic Bomb dropped by the United States on Japan and our world permanently changed, for at that moment man had discovered the ultimate means to destroy ourselves but now, 69 years later, we are still learning the intellectual and soul based moral bearings needed to control the fearsome murderous beast we unleashed on Hiroshima and then three days later on Nagasaki. Perhaps now we are ready to fully experience the life sustaining choice of love, social cooperation and altruism which are the innate driving forces of evolution as well as our only choice for the survival of our species: Allen L Roland, Ph.D

The day will come, when, after mastering the ether, the winds, the tides, gravity, we shall master the energies of love, for God. And then, for the second time in the history of the world, man will have made fire his servant: Teilhard de Chardin

Last year, I wrote a requiem for the children of Hiroshima, Nagasaki, Vietnam, Afghanistan and now Gaza but today I write a note of warning ~ for the planet can no longer evolve without its moral conscience and bearings. See 2013 article ~

We as a world society have now reached a decisive point in human evolution where, as Teilhard writes, “the only way forward is in the direction of a common passion, a ‘conspiration’. To go on putting our hopes in a social order obtained by external violence would simply mean to abandon all hope of carrying the spirit of earth to its limits.”

Teilhard goes on to conclude in his book Human Energy a profound truth that I deeply believe and prove every day in my work as a heart centered transformation consultant ~ “Therefore, despite all checks and all improbabilities, we are inevitably approaching a new age , in which the world will throw off its chains and at last give itself up to the power of its inner affinities ~ Either we must doubt the value of everything around us, or we must utterly believe in the possibility, and I should now add, in the inevitable consequences of universal love.”

It’s all about universal love or the innate urge to unite and the key to this Unified Field  of soul consciousness is Gratitude and it begins with ourselves. As the world approaches this point of conspiration ~ we must realize we all have a part in this coming together of mankind and our whole life has essentially been a quest to claim that authentic vocation.

My experience for the past 40 years as a heart centered counselor and consultant is that once a person breaks through their inner fears and pain to the joy and delight beneath ~ they begin to sense their authentic vocation within a constantly evolving loving plan and they want to claim their part in it.

In other words, as we draw closer to the darkness of destroying ourselves, more and more people feel the urge to claim their divine part in the loving plan as light workers ~ and I find myself increasingly being called to service as a heart centered consultant for people who want to find their authentic heart centered vocation within this loving plan in action.

Nuclear doomsday may be close at hand but that only accelerates the inner drive towards the light and I can attest to that in my work as a consultant for heart centered light workers.

The Science and Security Board of the Bulletin of Atomic Scientists operate what they describe as the “doomsday clock”. It is a clock which marks how close mankind is to annihilation as a result of reckless endangerment of the environment such as with global warming or nuclear holocaust. According to the progressive group at the University of Chicago, midnight on the clock marks mankind destroying itself. 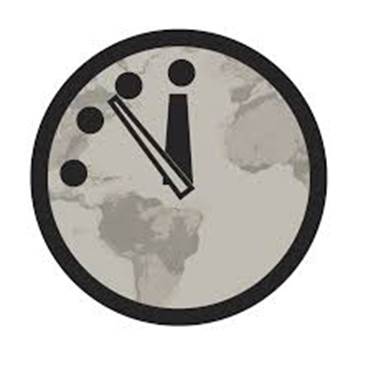 The doomsday clock is now at 1155 PM ~ and that now includes Climate Change and Global Warming. Our choice is close at hand ~ Do we continue to use force and domination to further separate ourselves from each other in the spirit of war or do we finally surrender to our evolutionary innate urge to unite and cooperate with one another in the spirit of love?

Teilhard sensed this also in 1955 in his book Human Energy ~ ” Love one another ~ those words were pronounced two thousand years ago, but today they sound again in our ears in a very different tone. It no longer says only Love one another in order to be perfect but adds Love one another or you perish.”

My greatest sense of belonging is knowing that I’m a functioning part of a loving plan in action, which also happens to be God, and I’m not only in sync with my destiny but most importantly in service within that loving plan. I also maintain that I was born in 1934 with that inner wisdom and direction and all I had to do was surrender to love and listen to my heart to finally get in sync with my authentic vocation and gift.

Hiroshima must be remembered and understood as a warning and a wakeup call to the planet that it can no longer resist the universal urge to unite or we will surely perish as a species and a life sustaining planet.