Reports, including photographic evidence reveal that Israel is using an energy weapon to attack targets in Gaza.  The destructive beam, thought to be a high energy laser, is emitted from a plane identified as a Boeing KC707 “Re’em,” originally configured for Electronic Warfare.

(Hollywood, as is so often the case, gets it right”)

Those observing the attacks cite a beam from a 4 engine jet hitting a target which immediately turns “white hot.”  After these attacks, the target area is then hit with either bombs or artillery to destroy evidence of the use of an American designed and built energy weapon illegally given to Israel.

BACKGROUND
The weapon used is identified as part of the YAL 1 system, a COIL laser (chemical, oxygen/iodine laser), originally intended as an aircraft mounted system to shoot down ICBMs.  Boeing approached the Department of Defense in 2002 and by 2004 had mounted its first system on a 747/400 previously flown by Air India. 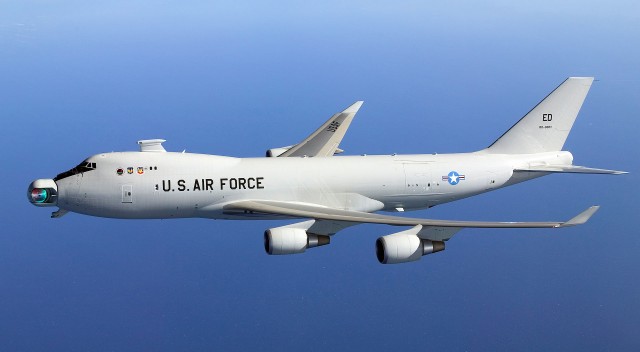 Boeing had convinced Secretary of Defense Donald Rumsfeld that this system, mounted on as many as 7 aircraft, could fly 24 hours a day around Iran and defend “the free world” against nuclear tipped ICBMs that Rumsfeld believed Iran was planning to use.  Please note that it was Rumsfeld that told television audiences that Afghanistan was “peppered” with underground cities serviced by rail links that supported division sized Al Qaeda units that, after ten years, no one was able to locate. 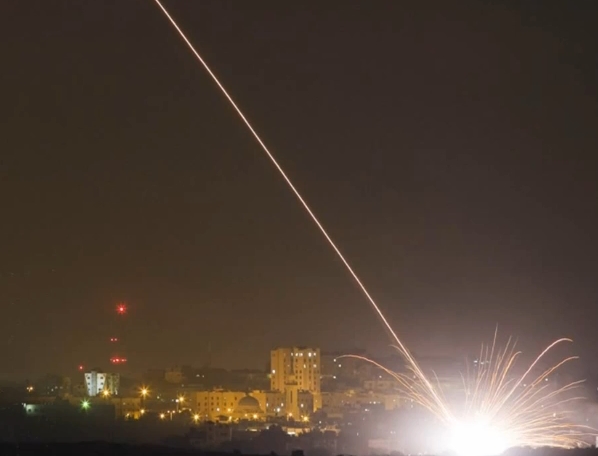 Boeing tested the system in 2007.  The Department of Defense claimed the system could shoot down low earth orbit satellites and that in tests conducted in 2010, destroyed multiple test missiles.  There is no reliable confirmation of this other than a press release from then Secretary of Defense Robert Gates.
CANCELLATION AND MYTERIOUS DISAPPEARANCE
The Center for Strategic Studies, in an interview with then Defense Secretary Gates published the following:

“I don’t know anybody at the Department of Defense who thinks that this program should, or would, ever be operationally deployed. The reality is that you would need a laser something like 20 to 30 times more powerful than the chemical laser in the plane right now to be able to get any distance from the launch site to fire.”
So, right now the ABL would have to orbit inside the borders of Iran in order to be able to try and use its laser to shoot down that missile in the boost phase. And if you were to operationalize this you would be looking at 10 to 20 747s, at a billion and a half dollars apiece, and $100 million a year to operate. And there’s nobody in uniform that I know who believes that this is a workable concept.”

After $5 billion was spent, the functioning prototype only capable of being fired directly at nearby targets, a system very capable of acquisition and destruction of ground targets with no air defense protection only, was said to have been flown to a scrap yard.
The plane itself is still there, at Davis Monthan Air Force Base, with other failed dreams and nightmares.
However, the weapons system disappeared, only to reappear in Israel as a “missile defense” project, an adjunct to the “Iron Dome” system.  Israel’s Rafael Defense had been trying to develop laser weapons on its own to intercept rockets being fired from Gaza.  It was never able to neither deploy a laser powerful enough nor develop a radar system able to be effective.
TREASON AND DECEPTION
“Friends of Israel,” within the US defense community were convinced by Israel that the system could be finished and deployed to protect Israel against a purported “missile onslaught” from Tehran.
In truth, there was no such intention.  Instead, as in the film “Real Genius,” the laser system was always intended to be deployed against ground targets, for terrorism and assassinations.  The “delivery system,” a Boeing airliner configured for AWAC, electronic warfare or refueling, could easily be modified to “clone” commercial air traffic and attack targets thousands of miles away or as close as Gaza, Lebanon, Syria or Iraq with total impunity.
Israel’s Raphael announces acquisition of a high energy laser system and credits an unnamed relationship with Boeing from the video below taken from the Raphael press release:

OUTSIDE IMAGINATION
McLeod and Rogers, in The Law of War, examine the history of prohibition of incendiary weapons.  Israel’s use of white phosphorous, intended as a “smoke market” as a corrosive anti-personnel weapon against civilian populations in Lebanon and Gaza skirts initial language, as cited below, in the St. Petersburg Declaration of 1868, but falls well short of evading later prohibition on the use of chemical agents.
“The first treaty to deal with weapons was the St Petersburg Declaration of 1868. Here states were concerned about the development of explosive or incendiary bullets for use against the wagon trains of enemy forces. It was felt that these bullets might be used against enemy personnel15 and cause unnecessary injury.
The Contracting Parties agreed ‘mutually to renounce, in case of war among themselves, the employment by their military or naval troops of any projectile of a weight below 400 grammes, which is either explosive or charged with fulminating or inflammable substances’.
The declaration does not seem to have affected the practice of states in using tracer for range finding, even mixed with normal ammunition, nor the use of small explosive projectiles for anti-aircraft and anti-material uses.  It did not prevent states from using four pound, thermite-based incendiary bombs during the Second World War. These, obviously, were more than 400 grammes in weight. Furthermore it could be argued that they were not ‘projectiles’, a term that certainly would not include illuminating flares or smoke canisters.”
The use of energy weapons for assassinations and terrorism had, prior to only a few short days ago, been subject of speculative fiction only.  No one had imagined that a failed American weapons system would be pirated for deployment in acts of terrorism by a rogue state.
A greater question arises, if this “failed system” costing many billions has been shipped off “in the dark of night” without public knowledge or official authorization for use in a criminal manner, what other systems may have been similarly pirated?
There is conclusive evidence that W54/Davy Crocket nuclear weapons made their way to Israel after 1991 after an
accident at Dimona is reputed to have made that facility useless for weapons development.
Similarly, when the Ukraine retired its “fleet” of SS21 tactical nuclear missiles, Israel took possession of the warheads, servicing their deuterium booster gas all these years to keep them ready for deployment.  Intercepted communications between the Kiev junta and Israel now indicate that Israel is ready to “repatriate” some of these nuclear weapons to the Ukraine for use against pro-Russian separatists.  Ukrainian leaders have spoken of the intent to deploy and use these nuclear weapons publicly on several recent occasions.  From USA Today:
“KIEV, Ukraine — Ukraine may have to arm itself with nuclear weapons if the United States and other world powers refuse to enforce a security pact that obligates them to reverse the Moscow-backed takeover of Crimea, a member of the Ukraine parliament told USA TODAY.
‘We gave up nuclear weapons because of this agreement,’ said Rizanenko, a member of the Udar Party headed by Vitali Klitschko, a candidate for president. ‘Now there’s a strong sentiment in Ukraine that we made a big mistake.’”
THE PATTERN IS CLEAR
With today’s bombing of a UN refugee facility in Gaza, with the use of chemical and now energy weapons, with Israel’s planned sale of nuclear warheads to Ukraine, there is little more that could be done to establish Israel, not only as a rogue state, but as a “clear and present danger” to not only regional but global security as well.
As Jim W. Dean of Veterans Today recently stated, “Their fingerprints are at every crime scene.”
—–
DEVELOPMENT BACKGROUND