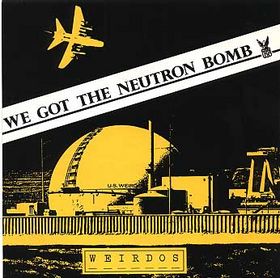 —
“…both Baghdad and Tora bora were nuked. They worked so well that they are here to stay. Any future battle will use them. The joint chiefs of staff stated after the battle of Baghdad that if we had used these in Vietnam we would have won. Never again will we ever lose with weapons like this in our arsenal. Mini and Micro nukes are here to stay so get use to it. Advanced bio- weapons “Ebola” and “Bug Spray” are next.”
—
The following text was submitted by two groups.  One is the IAEA, the United Nations nuclear watchdog group that has given us so much quality material over the past few months.  The remainder is from scientists at one of our nuclear weapons labs.

We have collectively taken it upon ourselves to inform the public of how real nuclear weapons work, how they are being used and what the future can expect.
Toward that end, for those who have not been following this series, please catch up where you can.  As much of this material is written by and for nuclear weapons designers, we are mixing input from sources of general interest with highly technical and often very classified material that few will understand thoroughly.
Our only goal with this series is to expand knowledge of the use of nuclear weapons, trends in development and limitations for deployment.

A key issue to note is that the wealth of material leaked by us already has consistently passed “muster.”  Our standing offer to weapons scientists and researchers with questions:  Submit them, we will get them answered as we have over the past few months.  We are sharing information, not peddling opinions.
———————————
UPDATE
In response to a legitimate comment that posed this question:  If neutron bombs were used at the Baghdad Airport in 2003, why did soil have to be removed for decontamination?  (Questioned submitted to and answered by the International Atomic Energy Agency)
A:There is radiation and there is fallout.
A. Radiation from Neutrons, Gamma Rays and X Rays will dissipate over a period of about 72 hrs down to within 10% of normal background levels. This is energy that is absorbed by atoms in the primary nuclear blast and it is slowly re-radiated over time.
B. Fallout is a different story. It consists of unburnt radioactive particles left over from the detonation of radioactive fuel such as Pu-239 etc. Not all of the Plutonium is consumed in a nuclear blast. About 10% will remain as radioactive fallout. It is equal to about 6 grams of unburnt fuel per 1KT of energy released.This along with other radioactive isotopes produced in the blast are what we call fallout. It has to be decontaminated by removing the radioactive top soil. Contaminated material is usually only a few inches deep and it usually is centered directly under the ground zero blast zone. As in 911. The blast zone is usually only a thousand feet wide when a small neutron bomb is used at ground level. If a larger one is used at high altitude then fallout is less of a problem and it is widely dispersed requiring minimal decontamination.
C. When ever any nuclear weapon is used there will always be some fallout material produced. The only difference between a conventional nuclear weapon and a enhanced nuclear weapon or a Neutron bomb is only in the type of radiation produced and its blast effects. Remember Plutonium in the micro-gram level is still poisonous if consumed.

The U.S. military used neutron weapons in the Battle of Baghdad, says a former commander of Iraq’s Republican Guard. And at least one retired U.S. Army officer is backing up his charge.
In an April 9 interview reported by Al Jazeera, Saifeddin Fulayh Hassan Taha al-Rawi says that, “U.S. forces used neutron bombs during their assault on Baghdad airport before the April 9, 2003, capture of the Iraqi capital.”
The bombs incinerated about 2,000 elite Republican Guard troops but left the buildings and infrastructure at the airport intact, he added. (aljazeera.net)
The neutron bomb is designed to produce a minimal blast while releasing a massive wave of neutron and gamma radiation, which can penetrate armor or several feet of earth. This radiation is extremely destructive to living tissue. The bomb has been in the U.S. arsenal for decades but has never been used in combat before.

Writing on April 13 for the Danger Room blog at Wired, Hambling says that from the description al-Rawi gives in the Al Jazeera interview of a series of explosions that killed the occupants of buildings without destroying the structures, “Interestingly, there is a weapon in the U.S. arsenal designed to do exactly that. … The AGM-114N.”
Hambling continues, “On May 15th, 2003, just a few weeks after the action at Baghdad airport, Donald Rumsfeld praised the new weapon. … Although officially described as ‘metal augmented’ or even ‘hyperbaric,’ the new warhead is not distinguishable from thermobaric weapons which produce the same sort of enhanced blast with a lower overpressure and longer duration for more destructive effects. Like many thermobarics, the AGM-114N used finely powdered aluminum. The military are generally quiet about thermobarics because they have received such bad press. Human Rights Watch criticized them because they ‘kill and injure in a particularly brutal manner over a wide area.’ “

A BBC News article on March 4, 2002, said the U.S. was using thermobaric weapons in Afghanistan, and described how they employ a combination of heat and pressure, “distributing a very fine cloud of explosive material throughout the target which is then ignited. The heat and pressure effects are formidable—soldiers caught in the blast could have the air sucked from their bodies and even their internal organs catastrophically destroyed.”
“The best evidence that I have from international sources, scientific sources, is that our position was becoming untenable at the Baghdad airport and we used a neutron warhead, at least one. That is the big secret of Baghdad airport.
“If one looks into international data, there are reportings of enhanced radiation of some livestock, and of human metabolic effects—death and disease. It explains why, after the Battle of Baghdad, we got fragmentary stories of things like truckloads of dirt being moved out and moved in. It made no particular sense at the time, until one puts it into perspective, as a decontamination operation. Again, that part of the Battle of Baghdad, the fact that we went nuclear, explains a lot of things that came out afterwards and also explains why it is that it had to be covered up.”
Whether it was a neutron bomb or the AGM-114N, the Pentagon used some sort of Weapon of Mass Destruction on Baghdad airport.

The complete fusion of 6 grammes of deuterium and about six grammes of tritium would produce an explosion of one kiloton. 56 grams of plutonium are necessary to create a one-kiloton fission reaction

The power of the nuclear reaction derives from the fact that the “fast neutrons” emitted in a thermonuclear reaction create more energy than neutrons produced in fission. Frank Barnaby notes that “the neutrons produced during the fusion process have much greater energy than fission neutrons.
On average, each deuterium-tritium fusion event produces 14 MeV of free neutron energy, compared with 3 MeV for each fission event.” Moreover, “fusion is a more efficient explosive process than fission. The complete fusion of, for example, about 6 grammes of deuterium and about six grammes of tritium would produce an explosion of one kiloton.” By comparison, about 56 grams of plutonium are necessary to create a one-kiloton fission reaction.
The deadly effects of the explosion are created both by heat, blast and neutron radiation. According to Barnaby, within a 500 meter radius of a one-kiloton ER blast, everything would simply disappear (primarily from heat and blast effects). Within one kilometer (KM), there would be immediate incapacitation and early death (within hours from the neutron and gamma radiation) for all exposed individuals.
Within two KM of ground zero, there would be severe radiation sickness, and most exposed individuals would die within a few weeks. It might be emphasized that these effects would result from use of a warhead one-fifteenth to one-twentieth the yield of the devices used at Hiroshima and Nagasaki (1KT) and that outside the immediate heat and blast area (the 500-meter radius), very little collateral damage would occur.
These weapons are thus very lethal. “A neutron bomb would have the same radiation (neutron)-killing capability, at a given range, as a ‘normal’ nuclear weapon of about five times the explosive power.” If delivery capabilities allow it, the weapons can be used highly selectively.
At the same time, since fusion produces no residual radiation, “the cleanest bomb would be a fission-fusion bomb with the minimum amount of fission necessary to trigger the thermonuclear reaction.”
The missile-equipped enhanced radiation warhead is a theater weapon. The use of small ER warheads to attack and incapacitate the enemy through exposure to intense neutron radiation is said to have at least three tactical advantages. First,because of reduced heat and blast damage, “they would make minimizing collateral damage easier to achieve.” Since heat and blast are limited to the immediate zone around the blast, it is thus argued that there would be less damage to buildings and landscape than with other weapons.
Second, since there is virtually no residual radiation from the weapons (other than the radiation from the fission trigger), forces could occupy the attacked area within a matter of hours without special protective clothing and without fear of contamination. Third, if the enemy were attacked outside the limited area where heat and blast effects occur but inside the zone of intense radioactivity (the one-kilometer zone in the example above where radiation achieves the necessary 800 rad level), the weapons themselves would be largely undamaged and could be appropriated for friendly use.

The Neutron Bomb by Michael A Aquino Ph,D from Earnest Coutu