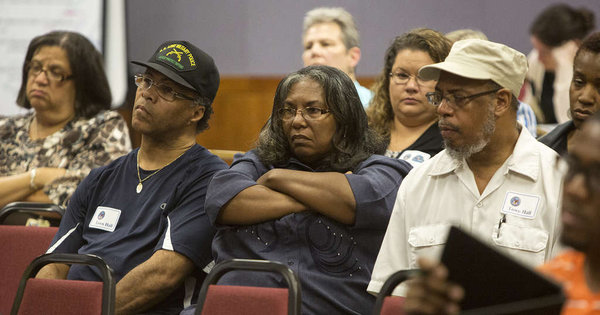 Veterans and family members attend the second of two town hall meetings held in Germantown. Some questioned why their claims have taken so long to be resolved. (ED HILLE / Staff Photographer)

(PHILADELPHIA, PA) – A Philadelphia Inquirer story published on August 29, 2014, had the local VA Regional Office scrambling to cover their tracks when the paper reported that pictures of Oscar the Grouch in its internal training guide WERE NOT meant to depict veterans.

All veterans know from experience that the VA goes out of its way to be courteous to its customers (veterans).  Yeah, and if you buy that line, I have a bridge for sale in Brooklyn.

From my personal experience and many other veterans I know, dealing with the VA is something like buying a used car.  You just know that you’re getting the ’round a around’ and the salesman’s pitch just doesn’t ring true.

Decide for yourself.  The VA training guide was entitled, “What to Say to Oscar the Grouch – Dealing With Veterans During Town Hall Claims Clinics.

It isn’t as if the VA doesn’t have enough problems with denial of disability claims and health care to sick veterans, but some VA employee dreams up this ridiculous title for a VA training guide.

The VA is a huge bureaucracy.  The VA, for example, operates the nation’s largest integrated health care system, with more than 1,700 hospitals, clinics, community living centers, domiciliaries, readjustment counseling centers, and other facilities.

The cost to provide these services is in the billions.

If this were a business and customers were not satisfied with the services, they could look elsewhere.

In all fairness, I know there are good people who work for the VA and some of them may even be managers, but I’m betting if Congress decided to give veterans the option of using a voucher for medical health care in community hospitals, the VA medical system would run out of customers real quick.

A copy of the Philadelphia Inquirer news story follows:

A top Veterans Affairs administrator in Philadelphia insisted Wednesday that the pictures of Oscar the Grouch peppered around its internal training guide were not meant to depict cranky veterans.

Instead, director Diana Rubens said, the image of the crass Sesame Street character who lives in a trash can was a message to VA employees to keep “our inner Oscar” inside.

Rubens made the comments as she opened the first of two town-hall meetings Wednesday for veterans and their families. They followed a report by The Inquirer that employees who volunteered to help at the meetings were given a training guide last week titled “What to Say to Oscar the Grouch – Dealing With Veterans During Town Hall Claims Clinics.”

The disclosure outraged some veterans and employees, who said they thought it fueled stereotypes of veterans as irate and demanding and made light of the national scandal over substandard service. A spokeswoman for the office said it regretted any misunderstanding caused by the slide-show training guide. A representative of the national VA called it a “poor decision” by staff here and said the document would no longer be used.

Rubens, who has led the VA benefits office in Germantown for about six weeks, addressed the matter at both town hall meetings there, which drew about 75 people between them.

“For folks who are not interacting with veterans every day, we wanted to make sure we were prepared, no matter how tough a problem you brought to us, we were ready to help you,” she said to the group of veterans, family members, and congressional staffers at the first meeting.

Pressed by reporters after that event to explain the title of the slide show, Rubens said she could see how it “might be misinterpreted” to suggest the veterans, and not the employees, were the grouches. But she repeated that it was directed at VA staffers and said the goal was training them to respond “most professionally” in the face of veterans’ personal stories.

“As I looked at that training material, it spoke to me as an employee: How do I make sure my Oscar the Grouch doesn’t come out?” she said.

In a statement, James Hutton, a national VA spokesman, said the guide was “certainly not intended to equate veterans with a popular children’s television character,” but rather to remind employees to “conduct themselves as courteously and professionally as possible.”

Hutton called use of the guide – which also included advice on how to tell whether a claimant was nearing an “outburst” and advised staffers not to “get in the swamp with the alligator” when dealing with angry veterans – a poor decision by staff at the Philadelphia office and said it had been discontinued.

Rubens said the training material was created by an employee using older documents on the VA’s internal intranet. There is no indication that the material was used in advance of town hall meetings at any other VA centers.

Rubens said she did not know which VA office first used the Oscar the Grouch metaphor.

“I don’t know exactly where Oscar the Grouch came from – Sesame Street, I think,” she told reporters, laughing. “I didn’t watch it.”

The town hall sessions are part of a national effort by the VA to repair its relationship with veterans. For months, reports of long waits for care, data manipulation to hide delays, and cover-ups by administrators have ignited fury among veterans.

The Philadelphia office – which manages benefits claims for 825,000 veterans in Southeastern Pennsylvania, South Jersey, and Delaware and pension claims from more than a dozen states – has not been immune from the controversy. Whistle-blower accusations of disarray and record falsification led the VA Office of Inspector General in July to launch an investigation there.

On Wednesday, veterans and their family members were given a chance to lodge their own complaints. The issues they touched on varied widely, showing the breadth of concerns that local veterans have with the region’s VA system, from poor nursing-home conditions to rude employees at the VA hospital in University City to claims simply taking too long.

At the first session, Deborah Curry of Philadelphia – whose husband, Mark, said he was among a group of veterans who contend that they developed cancer from drinking contaminated water in the 1980s at Camp Lejeune, the Marine camp in North Carolina – said the family filed a disability claim in August 2011 that had been bounced from “department to department to department.”

“Why should we believe anything the VA has to say now?” she asked Rubens, who fielded most of the questions and was joined by several other top administrators from the office. “Because we’ve been lied to for three years.”

Rubens said illnesses related to contaminated water at the camp, which a veteran at the second town hall meeting said he also suffered from, were a priority for the VA’s health-care and benefits branches. She offered to take information on the case and look into it further, an offer extended to numerous veterans throughout the two sessions who brought up problems that could not be addressed on the spot.

Timothy Johnson of Philadelphia, who retired from the military after 25 years of service that included two tours in Iraq, also spoke about his frustration with the claims process.

“You ask for the same medical records over and over again,” he said. “Redundancy. What are you going to do about that?”

Rubens said she had noticed claims in the system with multiple copies of the same document, either because it had been requested several times or because it had been sent repeatedly by a thorough claimant. She said the VA was improving its electronic system and scanning procedures.

Frank Thorne of Philadelphia said he had grown so frustrated with his claim – which he said was denied after pending for more than a year, leading to an appeal that has now stretched nearly two years – that he gets upset even having to call the benefits office. Thorne, who served in the Army from 1995 to 2005, said he knows he has submitted the necessary paperwork and even made trips to Ohio and South Carolina to collect needed documents, but still has gotten nowhere.

“I’m giving up hope. I’m losing trust,” he told Rubens. “I was told they should have my back. It feels to me like you don’t have it.”

“OK,” Rubens said in acknowledgment. “And you know what, I really want to try to earn that back if that’s what we need to do.”