Climate Change is here and now and can no longer be ignored as public demand for action has reached the tipping point. The largest climate change action in history takes place today in New York City as hundreds of thousands of New Yorkers, representing over 1,400 environmental justice groups, march peaceably through Manhattan’s streets as a reminder to the UN that their pathetic inaction will no longer be tolerated by the people ~ but will the people act:

“Organizing a big march is like throwing a rock in a pond, the splash is exciting, but the real beauty is in the ripples. I’m confident the energy from this march will ripple out in all directions, from fossil fuel divestment fights on campus to the push for a global climate treaty in Paris.” Jamie Henn, co-founder of the activist group 350.org, one of the march’s principal organizers.

The Argument is over. Climate Change is Happening Now ~ see 11 minute YouTube Video

More than 30,000 people have turned out for today’s climate change demonstration in Melbourne, the first of more than 2,500 similar events which will take place around the globe in the next 14 hours, ahead of a UN summit on climate change in New York early next week: See story ~

Bill McKibben, a scholar in residence at Middlebury College, and the author of The End of Nature and Deep Economy: The Wealth of Communities and the Durable Future, posted his comments regarding this historic  march on Tom Dispatch and his comments resonate with my own deeply held feelings about climate change ~ ” We march because California has lost 63 trillion gallons of groundwater to the fierce drought that won’t end, and because the glaciers at the roof of Asia are disappearing. We march because researchers told the world in April that the West Antarctic ice sheet has begun to melt “irrevocably”; Greenland’s ice shield may soon follow suit; and the waters from those, as rising seas, will sooner or later drown the world’s coastlines and many of its great cities. We’re tired of winning the argument and losing the fight. And so we march. We march for the beaches and the barrios. We march for summers when the cool breeze still comes down in the evening. We march because Exxon spends $100 million every day looking for more hydrocarbons, even though scientists tell us we already have far more in our reserves than we can safely burn. We march for those too weak from dengue fever and malaria to make the journey.”  See article ~ 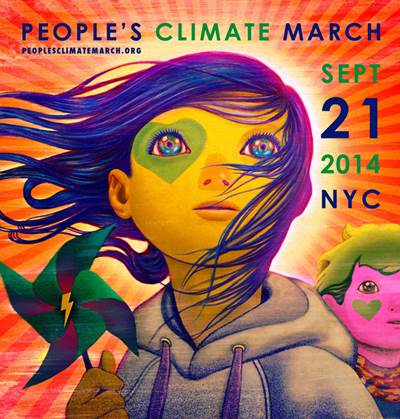 For myself, this Climate Change march is especially important for our children and grandchildren ~ for our inaction regarding global warming and climate change is putting their health and existence at greater and greater risk.

As Dahr Jamail reports on Truth out  ” Given the massive injection of carbon dioxide gasses into the atmosphere by humans and the fact that large amounts of methane are already being released in the Arctic which many scientists believe is already a runaway feedback loop that will add several more degrees warming to the planet, the current mass extinction event may closely resemble the Permian-Triassic extinction that happened about 251 million years ago.During that extinction event, earth’s worst, 95 percent of all species were killed off “.     See Jamail report ~

Chris Hedges calls the march the last gasp of Climate Change liberals and points out that “The Climate Group, for example, which endorses the march, includes among its members and sponsors BP, China Mobile, Dow Chemical Co., Duke Energy, HSBC, Goldman Sachs, JPMorgan Chase and Greenstone. The Environmental Defense Fund, which says it “work[s] with companies rather than against them” and which is calling on its members to join the march, has funding from the oil and gas industry and supports fracking as a form of alternative energy. These faux environmental organizations are designed to neutralize resistance. And their presence exposes the march’s failure to adopt a meaningful agenda or pose a genuine threat to power.”

Hedges, who I greatly respect, offers perhaps the only true solution to Climate Change and it demands action beyond marching for only we the people can defeat the corporate state ~ ” We have known about the deleterious effects of carbon emissions for decades. The first IPCC report was published in 1990. Yet since the beginning of the Kyoto Protocol Era in the late 1980s, we have emitted as much carbon dioxide as was emitted in the prior 236 years. The rising carbon emissions and the extraction of tar sands ~ and since the industry has figured out how to transport tar sands without building the northern leg of the Keystone XL pipeline, this delivery seems assured ~ will continue no matter how many police-approved marches are held. Play by the rules and we lose. Resistance will come from those willing to breach police barricades. Resistance will mean jail time and direct confrontation. Resistance will mean physically disrupting the corporate machinery. Resistance will mean severing ourselves from the dominant culture to build small, self-sustaining communities. This resistance will be effective only when we refuse to do what we are told, when we turn from a liberal agenda of reform to embrace a radical agenda of revolt. ” See Hedges article ~

Climate change is most certainly here and now and the people are speaking and marching as they are today in New York but now it’s time for action ~ for there is no change without action and action always involves risk.