Literature and Cultures of North America

French people in Paris and Vincennes are interested in American writers and culture as evidenced by the 7th edition of  Festival America , Literature and Culture of North America U.S, Canada, Quebec, Haiti . It was sponsored in part by  Télérama the TV guide. 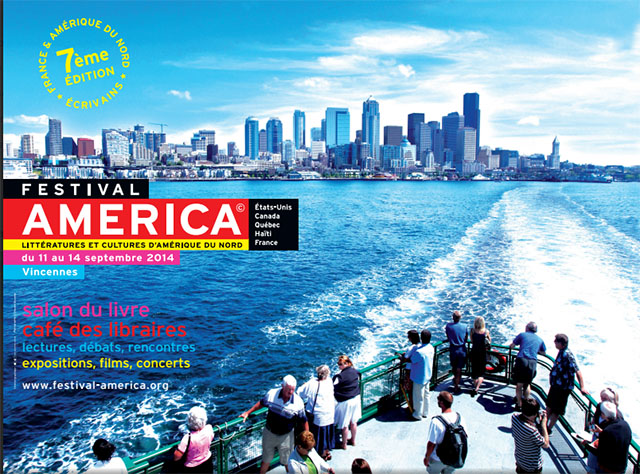 Vincennes is a suburb close to Paris known for its castle  Le Château de Vincennes and also for Parc Floral.  The Festival featured 65 authors from North America and 45  French authors.

My friend, Ludavic from Normandy who likes to speak and read English and I went to Festival America on Saturday night to see the film  about Louisiana, the discussion in French and the concert.

When we arrived we entered the Hotel de Ville ( city hall)  where the book stores had vendors selling mostly books with American authors but in French!  We asked if there were any books in English and one vendor told us that Shakespeare & Co. was the only bookstore there selling books in English.

There were three Grand Soirées

“L’Amérique de Richard Ford”  which featured a talk by the author Richard Ford hosted by Natalie Crom from Télérama. A short film Affaires de Coeure  by Catherine Berge was presented before the talk.

The theme was how was the US developed. Was it like in the Westerns?

There were 4 writers both American and France there: Jim Fergus, Philipp Meyer, Céline Minard and Eric Vuillard who participated in the discussion.

Before the discussion a film  ¨Winter in the Blood¨ an avant-premiere  before it opened in France  by Alex and Andrew Smith    (2013, USA)   It was from an adaptation of a novel

¨L’hiver dans le sang de James  Welch¨ (translated as   winter in the blood of James Welch ) which shows the young Blackfeet Indian  living on a reservation in Montana. He saw his father die in a pit and his younger brother disappeared at 14 years of age.  He looked at the animals  which seemed to be the last remains  of the heritage of his ancesters. The presentation by Alex Smith and Louis Welch was in collaboration with the Embassy of the United States of America in Paris.

It was hosted by Francis Geffard and Michel Bezin.    It was presented to a sell out audience – there were no empty seats and some people were standing. First there was a projection of short films from Helgi Picciinin . ¨La Luisiane d’aujourd’hui: vivre en deux langues¨ ( Louisiana today to live in two languages).  It showed how  the generations gradualy lost their French language but a minority of people francophones loved their French language and French culutre, and encouraged the use of the language, arts and French culture:  The writers from Louisiana went on stage and told about their attahment to New Orleans in the recent past such ad Katrina and also the leaks fo plateformes of petroleum from BP. These writers shared their thoughts about Cajun culture and their love for New Orleans. We were pleased to hear from Zachary Richard, David Cheramie, Tim Gautreaux, Jesmyn Ward, Joseph Boyden, Helgi  Piccinin and André Gladu.

After the discussion, there was an amazing concert by Zachary Richard;  For 40 years he has been singing in Cajun and French as well as English;  His last album¨Avec Le Fou ( With the Crazy) he affirms his love of the French language and the poetry of its music. He is an ecologist and wants to keep the love of the culture of  the land of his ancestors. For the concert, he sang and played the guitar while his accompanit played the fiddle!  We felt the enthusiasm of the crowd!  At one point we all got up to dance in our places!  The concert went on until about 12.30.   Ludavic and I wondered if the attendees came primarily for the concert.

During the festival there were  speeches  about many subjects:

¨Dans les île¨s  in the Islands

Where are we in the American dream?

What is Ameria?  Each writer tells of his vision of America and how it inspires his works.

For the love of art

The topics talked about were  music, painting, dance and movies Stevern Sampson, an American  journalist, writer and critic  gave a speech entitled

He answered the question if Paris has a literary prestigue with writers from across the Atlantic. He talked about Henry James, Ernest Hemingway, Anaïs Nin, Henry Miller and so many others.

He never made a public appearance or wrote anything for 40 years of his life.  Fréderic Beigbeder  wrote about Salinger in his new novel ¨Oona et Salinger.

Joyce Maynard  shared a part of his life  an episode which she shared in ¨Et devant moi le monde- translated  and if front of me the world.   I remember reading Sainger’s ¨Catcher in the Rye¨which was popular in USA  at one time.

Pacal Thuot was the moderator.

He was called the American Tchekhov,   He wrote about modest people and ordinary dramas.

His novel  Les Vitamins du Bonheur   Vitamins of Good Luck was published in 1976.

His work is considered as one of the most important of the 20th century/  He was a prolific author and his book  ¨Sur la route¨ with the new edition and new translation is considered an  important book tor ead.

Yves Buin, Herménégide Chiasson and Fanny Wallendorf participated in the discussion which was moderated by Hubert Artus.

There were films about Quebec, Haiti and  French Guiana;

Twenty-seven writers francophones from North America came to the festival to echange ideas and tell about their cultures from Quebec; Haiti, Acadie, Louisiana, Manitoba and Saskatchewan . They came to Versailles to tell us their vision of America where they write in French.:

Louisiana  – to be Cajun today

There was interesting photography by French photographers.

Montana, Montréal-New York and American States of Mind were  titles of some photographs.

The Club photo of Vinennes Images chose 40 photographs to display.

Festival America  Litératures et Cultures d’Amérique du Nord 7th edition was interesting, educative and fascinating;  We wish to thank the press office  Laurent Delarue and Marianne Fontaine for inviting us to have an enjoyable experience.

For the complete program go to www.festival-america.org.

To  see the videos and audio presentations.