Civil wars in Syria and Ukraine, the threat of ISIS, and now protests in Hong Kong. So far the UN has prevented a war from breaking out between super powers since the end of World War II, but recently the US has not gotten its way in the UNSC. By way of financial flows and sanctions, Western powers have ultimately started a world proxy war.  Are in we in the throes of World War 3?

Yesterday Cross Talk had an excellent discussion on this issue with Rodney Shakespeare, Patrick Henningsen, and George Szamuely.  Here check out what they had to say….

Off To World War III

a poem by Johnny Punish 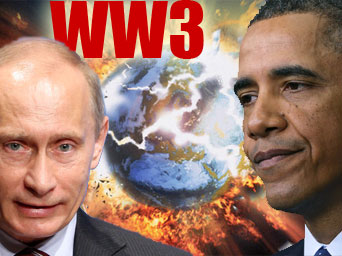 America and the Global a Go-Go
Where liberty was once the dream
Her People No Longer Question
Goose-Stepping, know what I mean?

So are we with her or against?
Stabbing Freedom Red
And a patron who gives applause
While Liberty Beaten Dead

Clash and Kill are we
Quoting Religious Script
Eat our Oil Food
Is this our tale from the crypt?

America, once a beacon for all
In a world gone mad
Is that our carcass in the street
Or have we all been had?

It’s a Hijack of the people
By the Peddlers of the Fear
Where peace is not a goal
Haven’t ya heard? It’s the New World Order dear!

Marhaba, its Armageddon Time
A do or die they say
Where might is right and peace is wrong
Shalom Cowboy F-15 Pull Make My Day!

So kill your neighbor and his children too
Drop a Bomb, no consequence on you.
And as your legend grows
The feared one you shall be
Pack it up Soldier, You’re on!
It’s off to World War III

Educated at University of Nevada Las Vegas and California State University Fullerton, his articles appear in Veterans Today, Money News Now and his Johnny Punish Blog. His art music is promoted by Peapolz Media Records and played on net radio at Last.fm, IHeartRadio.com and more.