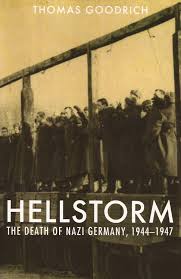 The victor always writes history. Only German war crimes were prosecuted at Nuremberg. British and American war crimes were whitewashed out of history. If not for Kurt Vonnegut’s best selling 1969 novel Slaughterhouse Five, Americans would have no knowledge of the deliberate targeting of civilians in the firebombing of Dresden.

Hellstrom: the Death of Nazi Germany 1944-47 is a meticulously researched encyclopedia of Allied war crimes during World War II. In it, historian Thomas Goodrich carefully compiles statements of scores of eyewitnesses, including Allied pilots and war correspondence about US, British and Russian atrocities against German civilians and POWs during and after the war.

A Deliberate Campaign of Terror Bombing

Dresden wasn’t the only German city subjected to carpet firebombing aimed at terrorizing civilians. Based mainly on victim and pilot statements, Goodrich details the deliberate firebombing (with phosphorus-based incendiary bombs) that occurred in Hamburg, Berlin, Nuremberg, cologne, Daimstat, Pforzheen and Wurzburg. The allies also firebombed three Swiss cities, another war crime, as Switzerland was a “neutral” country with no identifiable military targets.

Goodrich mainly focuses on Dresden, one of the last German cities to be firebombed. Many residents believed it would be spared, owing to its culture treasures and role as a hospital city for injured civilians. Dresden had no defense installation, major factories or air defenses. Owing to the absence of anti-aircraft weapons, the Allied bombers could fly low enough to target fleeing civilians and hospitals designated with a large red cross on their roof. The Red Cross later estimated that the Dresden massacre killed 300,000 – 400,000 civilians.

Prior to Dresden, the American pilots, unlike the British Royal Air Force (RAF) deliberately refrained from targeting. At Dresden, this changed, with Americans planes deliberately targeting civilians who survived the initial firestorm.

Like Bush II, Eisenhower deliberated created a new category of prisoners called Disarmed Enemy Forces (DEF), so he wouldn’t be bound by the Geneva Convention regarding treatment of Prisoners of War (POWs).

His treatment of POWs worsened following the May 8, 1945 armistice with Germany, as he no longer feared German retaliation against American POWs. In all, 800,000 German POWS died in French and US POW camps after the war ended the armistice. This contrasts with German treatment of Allied POWs, which followed the Geneva Convention 99% of the time.

The book contains victim statements from German POWS held in outdoor pens where they were drenched by continuous rain and fed 1/10 of a K ration three or for days a week. Eisenhower denied the Red Cross access to POW camps, as well as prohibiting them from supplying German prisoners food. The British, US and French military also used German POWs as slave labor, despite formal Red Cross protests that this, too, violated the Geneva Convention.

In addition to the maltreatment of POWs, the Allies honored a commitment they made at Yalta to repatriate one million Soviet dissidents (including White Russians who fought the Bolsheviks in 1917) to the USSR. This included 4,000 Soviet dissidents in the US who were forcibly repatriated. Stalin, in turn, summarily executed them or sent them to slave labor camps.

The treatment of German civilians and POWs by invading forces varied. On both the eastern and western fronts, experienced front line troops tended to be the most civilized. They reasoned that good treatment would make the Germans in the next village more likely to surrender. The rear guard tended to be far less experienced and more inclined to engage in rape, gang rape, looting and torture. Stalin refused to sign the Geneva Convention, and Russian troops were particularly feared for their savagery.

During the occupation, Eisenhower and Truman deliberately engineered a famine in the Allied sectors (US, British and French) of Germany. The massive carpet bombing had totally destroyed the food infrastructure and millions of German civilians starved as they tried to survive on boiled grass and roots. Truman outlawed private food relief to Germany until the Pope, former president Herbert Hoover and numerous high profile senators and journalists objected to the Truman’s policy of deliberately starving the German civilian population. In all, far more Germans died in the first two years of peace than had died in six years of war.

The Allies also carried out a particularly brutal regime of “de-Nazification” in which German adults (including prominent anti-Nazis) were arbitrarily arrested and tortured until they confessed to being members of the Nazi Party.

The treatment of German civilians would improve in 1947, as the Cold War gained momentum and Truman recognized Germany’s importance as a bulwark against the Soviet Union. 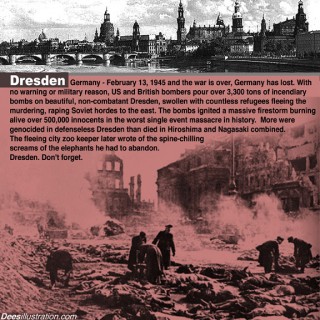