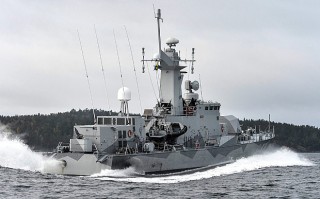 capital, as Latvia’s foreign minister warned its presence in the Baltic Sea could be a “game-changer”.

In scenes reminiscent of the Cold War, military ships swept south through the Stockholm archipelago, a network of rugged islands that spreads out from the Swedish capital.

The expanded operation – involving up to 200 men, several stealth ships, minesweepers and helicopters – came as reports circulated of a suspicious man in black clothes wading off one of the islands.

Sweden’s armed forces said on Sunday that an unidentified “foreign vessel” had been spotted surfacing in stretches of water 30 miles east of Stockholm that morning, and twice on Friday.

Military analysts think the craft is most likely a Russian submarine or a mini-submarine, although Moscow fiercely denies that and said on Monday that it was probably a Dutch sub.

“To remove tensions in the waters of the Baltic Sea and to save money of the Swedish taxpayers we would recommend (Sweden) to turn to the naval command of the Netherlands for an explanation,” a Russian defence ministry source told news agencies in Moscow.
That indictment appeared to be scotched later in the day, however, as the Netherlands said its diesel-electric submarine Bruinvis had indeed been undertaking exercises last week near Stockholm, but was in a berth in Estonia by Thursday, before the first sightings of the suspicious “man-made object” off Sweden.
The mystery was heightened on Monday when a Swedish website reported that intelligence officials were searching for a man in black with a back-pack, who was photographed by a local wading back and forth off Sandön island.
The Baltic is a zone of increasing tension between Russia and the former Soviet states stretched around the sea, which have large ethnic Russian populations and are nervous of a Ukraine-style intervention by the Kremlin.
Barack Obama, the president of the United States, met the heads of all three Baltic nations – Estonia, Latvia and Lithuania – on a visit to the Estonian capital Tallinn early last month, and Nato announced a few days later that it was creating a new 4,000-strong rapid reaction force for deployment in the region, in an attempt to salve fears of a Russian incursion.
Moscow does not appear to be intimidated. Shortly after Mr Obama’s visit, Russian security forces seized an Estonian intelligence officer in a cross-border raid and in mid-September two Russian military aircraft crossed into Swedish airspace.
Tensions were rising again on Monday. “Closely following events in the Swedish territorial waters, may become a game changer of the security in the whole Baltic Sea region,” Edgars Rinkevics, Latvia’s foreign minister, wrote on Twitter.
Reporters pursuing the “submarine search” on Monday said that a corvette called Stockholm and a navy patrol boat called Munter were involved, as well as military speedboats and at least one minesweeper and a helicopter.
One of the vessels put ashore to talk to an islander off the southern tip of Ornö island, and others moved south past the coastal town of Nynäshamn.
Ola Westerberg, a journalist with the TT news agency, said the craft in which he was following was initially allowed within 200 metres of a military vessel. “Then one of the bigger boats was suddenly asking civilian boats to keep a distance of 10,000 metres, so they seemed to be on to something down there,” he said.
The Swedish navy said its search operation was continuing with “undiminished strength” but gave no further information.
On Saturday, a respected Swedish newspaper reported that intelligence officials had picked up a distress call on a frequency used by Russians.
Niklas Granholm, a senior analyst at Sweden’s governmental Defence Research Agency, told the Telegraph that Russian submarines were understood to have made several incursions into Swedish waters in the last five years but the military had kept tight-lipped until the current incident.
Asked if the new alert was due to a Russian sub, Mr Granholm said: “Who else would it be? Our Baltic neighbours don’t have the capability, neither do the Finns. Norway and Denmark – not very likely; would the US want to do it, why? The UK? Certainly not. So you rule all those out and it points in a certain direction.”
Mr Granholm said that a Russian submarine could be mapping skerries and the rugged underground terrain of the archipelago for places to hide “resources and assets” in case of a naval conflict in the Baltic.
The incursion could also be a political demarche to test the water with Sweden’s new centre-left government, elected last month, he added.