Ebola Treatment Is Working According to Official In Sierra Leone, So Why Such Opposition?

(SIERRA LEONE) – A government official in Sierra Leone says that some people are recovering from Ebola because of a new treatment. The Minister of Information Alpha Kanu recently wrote in a letter that “this works; people are getting better.”

But efforts to get this information and the treatment itself to people have met with great opposition on the part of the United States FDA and others. At this point, every option to treat Ebola, both pharmaceutical and natural, remains experimental. So why is this one option being met with so much resistance?

The option that has Kanu’s enthusiastic approval is a nutrient that is not manufactured by a big-name pharmaceutical company. It is called Nano Silver, in a 10 parts-per-million solution, made by the non-profit Natural Solutions Foundation. But it has not been easy to get the product to the countries that need it most.

According to a statement by NSF’s Medical Director Dr. Rima Laibow, a shipment of the product was shipped to Sierra Leone on August 20. However, it didn’t arrive until “September 28, 5 weeks later while the disease spread and people suffered and died unnecessarily because international forces opposed the simple clinical demonstration of the nutrient.” The shipment follows a statement made by the World Health Organization on August 12, reported by Mashable, that acknowledges that there is not yet a proven treatment, but even unproven options should be made available to people afflicted with Ebola.

“In the particular circumstances of this outbreak, and provided certain conditions are met, the panel reached consensus that it is ethical to offer unproven interventions with as yet unknown efficacy and adverse effects, as potential treatment or prevention.”

The FDA in the U.S. has cracked down on the Natural Solutions Foundation, as well as two other companies marketing natural products, for making disease claims that they have not authorized, as reported previously by The Inquisitr. NSF is pushing back. According to the FDA’s website, nutritional supplements, essential oils, herbs, and other natural products cannot claim to “diagnose, treat, cure or prevent any disease.” Those products must post a disclaimer declaring such, because according to the American government, “only a drug can legally make such a claim.” No matter how effective a natural substance may be, there is, in effect, a gag order on any and all companies marketing them, preventing them from saying so.

Most of the companies selling such products maintain that their products strengthen the body so that it can repair and heal itself. Apparently, that is what is happening in Sierra Leone. Alpha Kanu sent a letter to Dr. Rima saying that “[t]here is no illness that doesn’t have a cure.”

Just before the shipment reached Sierra Leone, Kanu reportedly made it clear that his government did not need FDA approval to offer it as a therapy option, according to Star Africa. The Honorable Alpha Kanu is a trained chemist, who believes that the people who are suffering in his country have the right to use any and all treatment options that are available to them. It is “a matter of choice,” he believes, resting “on the patients or their families, as to whether to administer it as treatment for Ebola.” The Information Minister worked with President Ernest Bai Koroma to get the nutrient into Sierra Leone.

The American FDA has a long history of suppressing information and companies that offer non-pharmaceutical, natural therapy options, according to Natural News. The gag orders regarding non-drug options for Ebola are simply the latest in a long string of actions aimed at maintaining the monopoly. Nano Silver 10 PPM is not a drug but a nutrient, and as such, is not subject to FDA approval.

Nutrients are not capable of being classified as “FDA approved.” Yet, Dr. Rima has collected links to dozens of studies verifying the effectiveness and safety of Nano Silver, including a declassified study by the U.S. Department of Defense from 2009 which found that silver nanoparticles neutralize hemorrhagic fever viruses, including Ebola and Marburg.

Kanu notes that, though the unproven drug Zmapp has been highly touted by drug companies as effective, his country has not yet been on the receiving end of that pharmaceutical option.

An article by Black Agenda Report accuses the drug companies of having sinister motives, saying that “the treatment and cure have been held up until now quite simply because of the need for pharmaceuticals to make profit.” Mohga Kamal-Yanni further elaborates.

“Large companies will not invest in research and development for rare and neglected diseases, due to the limited scope for profit. They will continue producing the medicines that can make the highest profits rather than the therapies that are desperately needed for public health.”

According to Kanu, a “philanthropic” Sierra Leonean who is based in Atlanta, Georgia, Imam Sheikh Massally has been credited with sending a shipment of the silver product to be tried for Ebola patients. “He sent the nutrient Nano Silver – this works; people are getting better. The supply is enough for 300 people and we are going to bring some more.”

Dr. Rima reports that it is not only Ebola patients in Sierra Leone who are benefiting from the silver nutrient therapy.

“High level, reliable sources tell us from at least 4 countries in Africa that Ebola victims appear to be recovering from this deadly infection coincident with them receiving the remarkable nutrient, Nano Silver 10 PPM. This is very hopeful news.

“Their own immune systems appear able to regulate disease-causing multiplication of the weaponized, patented, unleashed and otherwise deadly Ebola virus to maintain homeostasis. They are among those considered ‘lucky’ to have survived.

“Not one country, but several, are reporting these results. Nano Silver 10 PPM is helping people faced with the health disaster move from illness to health.”

Last week she wrote an open letter to the Dallas nurse who first contracted Ebola, offering the Nano Silver 10 PPM free of charge to her and any other person in the U.S. who tests positive for Ebola, for as long as they are able to provide it.

Questions must be asked. Why is the FDA so intimidated by the free sharing of information about a substance that could work? What harm is there in people choosing to take the product, even in conjunction with more traditional therapies? If there is a serious crisis threatening a large part of the human population, why does it matter who gets the credit? Would not true leaders be more interested in solving the problem and saving lives than in political agendas or lining the pocketbooks of certain interests?

Posted by STANDARD TIMESPRESS on 10:22 pm. Filed under Breaking News, NEWS, YOUR HEALTH. You can follow any responses to this entry through the RSS 2.0. Both comments and pings are currently closed. 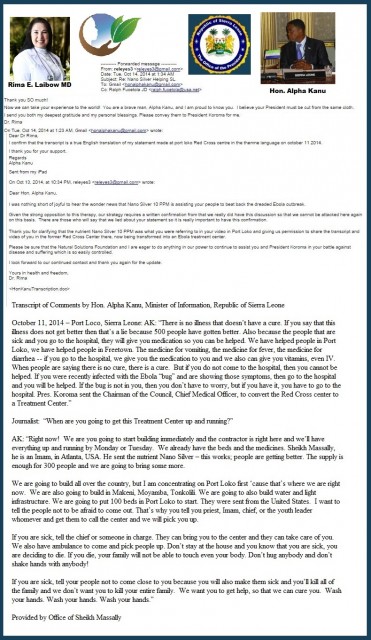