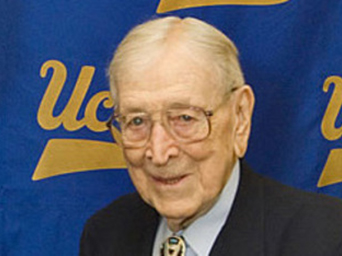 LOS ANGELES – Over past years, most of us associated UCLA’s athletic program with not only building national championship teams, but in championing individual character-building for its athletes.

Without equal, John Wooden set the bar the highest went it came to winning basketball championships and his record 10 NCAA titles during a 12-year period remain unchallenged because he set the highest standards in developing the best athletic ability and performance from his players on the court.

Equally demanding, he set the bar at the highest rung in developing the individual character of his players to be role model citizens off the court.

John Wooden’s legacy as a leader combined the teaching of ability with character. His mantra to his players was this: “Ability may get you to the top, but it takes character to keep you there.”

History has recorded that John Wooden’s teams and players maintained the very highest standards in athletic ability and individual character as this combination always produced champions on and off the court.

Coach Wooden retired in 1975 and it became impossible to match his standards at winning basketball championships.

Shortly before the start of the 1996–97 season, coach Harrick was fired for violating a NCAA rule that involved a student-athlete recruiting dinner and then falsifying an expense account for that dinner.

Charles Young, then Chancellor of UCLA, uncompromisingly announced that Jim Harrick was terminated as head basketball coach and would not be paid for the duration of his contract.

During a news conference the Chancellor proclaimed: “I felt I had no alternative,” “We think what we did was right. It is a very serious infraction.”

Rest assured that Coach Wooden’s legacy of character-building and doing what’s right had serious influence on the Chancellor’s decision.

During his years as a winning coach and role model at UCLA, coach Wooden proffered this personal insight to his overall success: “I’ve never stopped trying to do what’s right. I’m not doing it to earn favor with God. I’m doing it because it’s the right thing to do.”

The VA’s violation of Federal law is a very serious breach of public trust as UCLA’s illegal baseball diamond is situated on sacred land that was deeded 126 years ago to the United States Government with the explicit restriction that it is to be permanently maintained as a National Home for Disabled Soldiers.

Instead of war-injured Veterans being properly housed and cared for on this property deeded in their behalf, thousands are forced to live homeless and hungry on skid row and back alley squalor.

Today, Los Angeles is our nation’s capital for homeless Veterans.

Instead of honoring the Federal Judgment and directing the illegal occupants to vacate the premises, the VA Appealed it at the added expense of the American taxpayer and prolonged misery and suffering of disabled homeless Veterans.

Even worse, UCLA refused to accept responsibility that they were illegally occupying land that rightfully belonged to disabled homeless Veterans.

Instead of honorably vacating the premises, UCLA joined the VA in the Appeal by hiring one of most powerful and expensive law firms in the nation.

Nevertheless, some of America’s top legal scholars have declared that the Appeal of the Federal Judgment is “legally and morally indefensible.”

Instead of suing the VA for engaging the University in an illegal real estate deal, UCLA wants to use its wealth and power to finagle a privileged deal that would benefit their athletic program at the painful expense of war-injured and impoverished Veterans who are homeless.

Nearly 20 years ago after winning the NCAA basketball championship, UCLA fired Jim Harrack and canceled his $400,000 annual salary because he falsified an expense report for a student-athlete recruiting dinner.

Today, after winning the NCAA baseball championship, UCLA is defending its falsified baseball diamond contract where they pay $5,000 per month for ten acres that are actually worth tens of millions of dollars while tens of thousands of disabled homeless Veterans go hungry without breakfast, lunch or dinner.

Two weeks after the Federal Judgment was entered, UCLA awarded John Savage, its baseball coach, with a $1.125 million annual salary making him among the highest-paid college baseball coaches in the country.

Today, UCLA leads all colleges in the nation with 111 NCAA team championships and 132 total national championships. Clearly, UCLA is at the top of its game in national athletic conquests.

However, gone is the legacy of John Wooden when combined team athleticism and personal character were established as the standard-bearer for UCLA’s athletic program.

Today, UCLA has a reputation of being the winningest college in national sports, even if it means losing the only thing that really counts – its character.