Home Life The Ballad of the Cigarette Butt

Part I of: The Bankers’ War on Dissident Music

In forthcoming articles, I plan to nudge one nagging historical question from the realm of reasonable conjecture to the realm of certainty: the Rothschilds, Rockefellers, their allies, and their hit men did in fact slaughter two generations of dissident singers/songwriters.

Why would the bankers and their allies murder popular musicians?

Most citizens are either not interested in, or incapable of assimilating, contemporary versions of Tom Paine’s Common Sense or Aldous Huxley’s Brave New World Revisited. Hence, it takes something other than passionate and insightful analyses to light a revolutionary fire in a sufficient number of people. And here is the point: If left unmolested, popular, dissident musicians could light that fire.

Salavador Astucia explains the power of rock musicians in a bit more detail:

“The real threat of rock music is that it allows unapproved voices to shape public opinion, an area in which the FBI and other governmental agencies spend billions annually. Unlike other forms of entertainment, rock bands usually compose, perform, and record their music with little help from others. When they perform their music live, they often work tens of thousands of fans into emotional frenzies, willing to do anything the rock stars command.”

But what about the risks? It will be seen later that for someone like David Rockefeller, assassinations entail zero risks: He and his partners in crime have a license to kill. 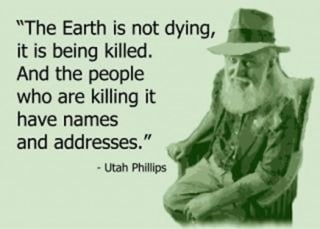 Seen in this light, it is perhaps no coincidence that the popular imagination often links major anti-oligarchic struggles to a particular song, e.g., the French “La Marseillaise,” the Russian version of “The Internationale,” the Spanish “Ay Carmela,”and the Italian “Bella Ciao.”

To pose a threat, then, a singer must be influential—if he writes and sings beautiful revolutionary poems exclusively for his aging parents or for a few people in an obscure folk music club or a labor gathering (as Utah Phillips did), the bankers (for the moment at least) are not interested in his songs. As well, to pose a threat, the lyrics must be genuinely subversive.

The present introductory article provides a black comedy which, despite its grotesqueness and magic realism, exemplifies the redemptive, educational, and revolutionary potential of dissident music.

Here then is a first tentative translation of Catalan singer/songwriter Albert Pla’s “La Colilla.” Bracketed numbers refer to explanatory notes, which follow the lyrics. The original Spanish version, along with the music, appears in the video below (and is also available here).

The Ballad of the Cigarette Butt 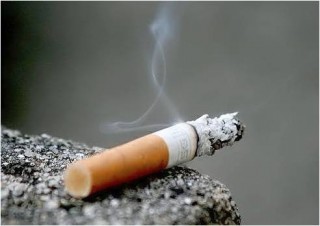 It was a truckload
of wetbacks heading towards the border,
looking for Mecca, looking for bliss,
heading for Miami and the easy life.
The border police were waiting for them,
those faithful guardians of America’s frontiers.
“Let us kill those impudent mestizos–”
Not even General Custer showed such savagery.
“I want them all dead or alive!”
yelled the sergeant in charge of the Indian hunt.
I’ll give one thousand dollars to whoever brings me
the scalp of the purest-blooded Indian.”
And then one head fell on the sand.
There in the sand rested the head
of Carlos Cuesta–the youngest descendant
of Montezuma, an Aztec chief.
Alas, his head fell on the sand;
there on the sand fell Carlos Cuesta’s head. 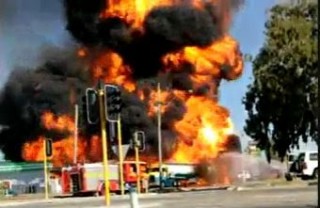 And he was already dead,
but his head was still smoking and rolling and smoking.
The little cigarette fell from his lips.
Was it fear that caused the butt to run away?
It kept rolling and, without meaning to,
crossed the border and saved itself.
Welcome to the United States of America! [1]
Let blessed Saint Barbara [2]
protect this little cigarette butt,
that is puffing and puffing and puffing smoke,
that butt that is here puffing smoke away.
This is the ballad of that little cigarette,
or rather of the cigarette butt;
a tale of one little cigarette that went rolling
from Laredo to Washington.
Ouch! For a cigarette butt, the spark of life
is not Coca-Cola–it is gasoline.
Let’s see: What happens when a butt
sneaks into a gas station?
Hey? What happens in that case?
Well it pffts!
Well it booms!
The explosion was heard throughout Texas;
it was the beginning of a great quest.
A spark overtook a pipe
of those homicidal subterranean gas storage sites,
which then exploded under a refinery
of nuclearized oil plants. [3]
Also thanks to the police
and the elite fire brigade,
the conflagration spread from well to well
from El Paso to San Antonio, yes!
You see, gasoline is highly inflammable,
so the Lone Star State blew to smithereens.
It was the bonfire of the vanities,
the inferno of the cowards.
With so much industry and so many pipes,
so many wires and such fine communication networks,
it was a child’s play for the butt,
setting the entire state of Texas aflame.
With a nuclear power plant here,
and a military arsenal there,
in the blink of an eye here, there, and everywhere,
Saint Barbara! What mayhem!
The fire kept going and going
Alabama, Missouri, Louisiana, Georgia.
And the worst part is that nobody even knew
what might happen when it reached Florida.
That in a millisecond
a Navy base would explode.
For all I know, it was one of those bases that produces
very radioactive chemical atomic crap.
The entire state of Florida was screwed in the ass,
the two Carolinas, poor Virginia.
And by and by the news reached the west
that the fire was spreading and spreading.
The fire left New Laredo,
crossing the desert via the gas pipeline.
And in California it was welcomed
with fireworks and pyrotechnics.
Welcome to the United States of America! [1]
Let blessed Saint Barbara
protect this little cigarette butt,
that is puffing and puffing and puffing smoke,
That butt that is here puffing smoke away.
And Carlos Cuesta’s head
remained lifelessly lying on the sand.
But his cigarette was triumphing,
busily living the American dream.
The butt was a big hit in San Francisco
and fashionable throughout the nation.
A royal reception awaited it in San Diego–
the entire West Coast was at its feet.
A lot of dazzling special effects accompanied
The incineration of the entire Silicon Valley.
Then the butt arrived in Los Angeles: Long live the good movies!
Hollywood’s industry was going up in smoke.
Next, the butt left for Las Vegas
and there, lying on the sidewalk it saw another butt
and set it on fire too, pleading with it “play with me,
I’ll bet on red [4] that I will burn everything.”
So all the little cigarettes,
the castaways, the trampled upon, the most oppressed,
they all joined the union
and thus was born the fire mafia.
Meanwhile in a southern state,
a big bunch of pure Havana cigars
were sowing the seeds of chaos and screwing
the American Marlboros.
And this turned into an orgy of cigarette butts,
a veritable Halloween party.
Operation Mumbo Jumbo
getting wilder and wilder and wilder.
(American anthem is playing in the background)
“This hyar is th’ President
of th’ United States of Uhmurca.
Our country is unner attack,
but stay calm, on account o’ yer govment
having ev’rythin’ unner corntrol.”
Ha ha! In fact, nothing was under control . . .
Everything was going to hell.
Not even the 7th Cavalry [5]
could avoid such carnage.
Nebraska and Kansas were no more.
Of Colorado not a trace was left.
The yellow rose of Texas turned red hot,
and Dallas and Phoenix were ablaze.
The fire was burning like Jack Daniels.

It was more toxic than a McDonald’s hamburger.
Have you ever noticed the stench of
a burning star-spangled banner?

So our Wild West is on fire.
There it goes! What a plague, what bad luck.
Wyoming is on fire, Oregon is on fire,
Wisconsin is burning, Washington is in flames.
It is a super-duper spectacle,
a fantastic TV show,
superbly directed, with numerous extras taking part,
a spectacle applauded in the rest of the world.
No no no no no no no …
“This is a strange thing, a very strange thing,”
NASA averred, “We don’t know what’s happening.
In the Pentagon they were already planning
what the reprisals would be.
In that land of wonders
everything burns so much faster–
without the FBI or the Marines or the CIA,
everybody goes to hell: divine justice.
And this is the real Montezuma’s revenge
atoning for American crimes in Chile, in Guatemala,
in Argentina, in Nicaragua.
That is the way dictatorships turn into ashes!
“Houston, we have a problem . . .
Houston, we have a problem . . .
Smoke! I have smoke coming out of my ears . . . “
Saint Barbara dances and dances,
with her immaculate a stare
blasting the USA
with lightning and thunder.
Everything was like Disneyland
with lots of beautifully-animated fantasies.
The higher you climb,
the harder you fall.
Because then came the plagues
and rats appeared looking for human flesh.
Acid rain scorched Wisconsin
and all of Minneapolis and Indianapolis.
Adios Wisconsin, adios Detroit;
bye-bye Boston, bye-bye cowboys;
great Babylon is burning.
At last the butt arrived in New York.
It entered Manhattan and the Big Apple.
“Shall I have this apple baked, or shall I have it stewed?”
You see, the butt was a veritable gourmet,
an aficionado of fine cuisines. 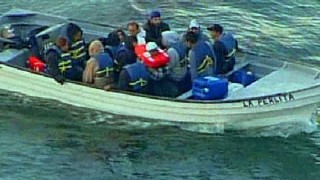 [1] English in the Spanish original lyrics.

[2] Saint Barbara: 1. the patron saint of miners and the working class; 2. In Spanish, the part of the hull of ships where gunpowder is stored.

[5] 7th Cavalry: U.S. Regiment, infamous for its genocidal activities in North America, the Philippines, and elsewhere, e.g., the massacres of Little Bighorn and Wounded Knee.

[7] Mother country: Now that the USA–which replaced Spain as Mexico’s colonial mistress–vanished, the Mexican butt is on a voyage to Spain, perhaps to even the scores with that country too.