Home Life Why the Ferguson grand jury was wrong 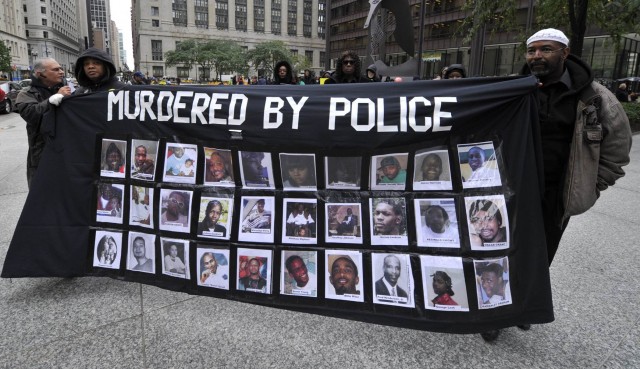 When someone relies on ad hominems, they’re admitting they don’t have much in the way of actual arguments or evidence. That’s why the CIA invented the term “conspiracy theorist.”

I have a bookshelf of maybe 50 books proving 9/11 was an inside job, and another few hundred supplying pertinent background. The other side has two words: “conspiracy theorist!”

Likewise, the folks defending Darren Wilson have only one word: “Thug!” That’s  about all my good friend Gordon’s article really says. Somehow he expanded that into a long, rambling diatribe. Is VT paying by the word? How come nobody told me?

Defending Wilson by calling Brown a thug is a good way to start a race war, if that’s what you’re after. If I were a pissed off young black man, I would see all those white people pinning racist tropes on Brown as “the enemy.”

The specific issue is what really happened that night, not whether Mike Brown fits a racist stereotype about big scary young black men.

And the larger issue is whether American police are getting away with unjustifiable violence, including murders, against the citizens they are sworn to protect.

I recently interviewed John Eskow, who has spent a lot of time with police, including riding around with them in squad cars in poor neighborhoods, as research for his writing projects. He says the cops come across as nice guys. He also says they murder people with such regularity and such impunity that they even have a slang term for planting a gun on their victims after they’ve shot them. They call such a planted gun a “ham sandwich.” Apparently cops conspire with each other to murder people and plant weapons on them and cover it up – “ham sandwiches” are a regular part of police work, just like donuts and coffee.

Another regular part of police work is murdering people and then making up a fantasy story that the victims were “reaching for their waistbands.” Apparently young black men facing armed policemen have an inexplicable compulsion to make this invariably fatal gesture, at least if the police are to be believed.

In search of truth about police violence, I just interviewed John Eskow, author of The Bizarre Compulsion of Black Men to “Reach for their Waistbands,” and Bob Reuschlein, author of the article appended below.

#1. By letting the local district attorney present the case to the grand jury instead of appointing a special prosecutor, the governor left this conflict of interest in place. The district attorney needs the police and the police union on his side to be effective in his job and to get reelected. [Editor’s note: Asking Ferguson prosecutor Bob McCulloch to go after a cop is like asking Judge Alvin Hellerstein to prosecute his fellow dual citizens for 9/11.]

#2. By letting the police officer testify first he was allowed to use the aura of the police in his favor and escape hard questioning of his story. This also turns procedure completely upside down, letting the defense put on a case before the prosecution. This is exactly how an indictment of Michael Brown would have started. Later when witnesses contradicted his story, the grand jury subjected these witnesses to skeptical questioning with the presumption the officer was correct.

#3. The officer was able to present several versions of the story later contradicted by witnesses. He was able to clean up his language used when he said “get the f… off the street” to the two black young men. (Chris Hayes of MSNBC interview of the companion)

#5. As Michael Brown runs away 130 feet from the car there was a jerk after several gun shots most of which missed, this was probably the second shot to hit Michael Brown as the autopsy shows one arm wound that could have been from the rear. His companion says Brown turned around and angrily asked “why did you shoot me?” as he put up his hands in surrender and started walking back towards the car. Rachel Maddow MSNBC had a very credible witness the first week, a store manager going to talk to one of her employees saw the whole thing. She said there was a pause in the shootings, a jerk by Brown just before turning around and holding his hands in the air in surrender, then a final burst as at least four shots hit two in the arm, one in the chest, and the fatal last shot in the top of the head as the body fell forward after the other shots.

#6. Forensic evidence then shows a bullet through the palm of the hand and another in the arm that would be consistent with his hands raised in the air in surrender (from an Andrea Mitchell MSNBC guest expert). The officer says he never raised his hands in surrender, but multiple witnesses saw him surrendering. One witness backed up the officer’s account that Brown charged him and did not raise his hands. It is not unusual for police to reward criminals who give supporting testimony with time off, but I do not know for sure if this happened here.

#7. The officer shot Michael Brown for jaywalking, not knowing about the cigarillo theft. One radio caller said the date stamp of the video showing the theft was June 6th not August 9th, but date stamps can be wrong or not set properly. The grand jury was shown a law that allowed police to shoot fleeing people, but did not tell the grand jury the Supreme Court had struck down such laws twenty years ago. Then they gave a half hearted explanation to the jury when they discovered the initial instructions were misleading. (This part comes from Lawrence O’Donnell MSNBC research of grand jury transcript)

#8 The body being left for four hours in the street and the four letter word in the initial encounter was consistent with racism. After shooting Brown at the car, the policeman may have decided death was a good way to reduce the financial liability of shooting someone with out cause. Then there’s the simple possibility of indifference to the death of a black man. The officer claiming Brown had a demonic look in his face, also sounds like typical racism.

#9 The officer claimed Brown put his hand in his pants before charging the officer, suggesting a weapon might have been there, but Brown was wearing basketball shorts with elastic band and no belt, so it is not possible to put a weapon in the waistband because it would be too heavy and fall down. Cross examination of the officer’s testimony in a real trial would indicate this claim is likely false.

#10 The profanity, the reckless indifference to Brown’s life both with the close up shot and the later slaughter shots, and the militaristic approach to the peaceful demonstrators, show what a high military spending former slave state is like compared to the much more orderly process in New York, a low military spending state that never had slaves. Research shows that police can provoke a crowd. But a trusted friend sent me this: “I have seen a video log of police in Ferguson poking around a parked car, a car that was across from the auto parts store that later was aflame. Shortly after police, and I mean shortly, moved away from the car, it burst into flame. The auto parts store was set ablaze later that night. Hopefully the video will become public.” The attitude of the entire Ferguson police force suggests that Darren Wilson was a lying racist guilty of manslaughter protected by the district attorney and police. This last quote suggests the police may have framed the community for violence, as does the inexplicable lack of using the national guard to protect the merchants.

Here is a strategic vision of the Michael Brown murder:
https://www.academia.edu/9028202/Militarized_Terror_Policing