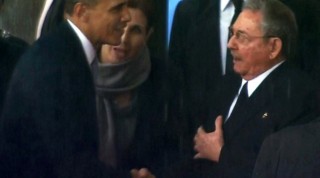 After more than a year of secret talks, Obama announced today that he’s ending the fifty-four year Cuban embargo to re-establish diplomatic ties. According to the President, the move was conditional on Cuba’s release of USAID contractor Alan Gross. Gross was arrested in 2009 and sentenced to fifteen years for distributing banned technology and trying to set up an Internet service.

Additional measures, according to the fact sheet put out by the Obama administration, include re-opening the US embassy in Havana and relaxation of trade restrictions to allow American businesses to export telecommunication equipment, agricultural commodities and construction supplies. American travelers to Cuba will be allowed to use American credit and debit cards, and US owned companies will be allowed to provide services and engage in financial transactions. This is in addition to a gradual reduction in travel restrictions Obama first introduced in 2009.

The fact sheet heavily emphasizes the export of telecommunications and Internet technology by US companies. Prior to June 2013, Home Internet connections were illegal in Cuba. Despite this recent liberalization, Internet services remain limited, slow and expensive. Only 5% of the Cuban population has reliable Internet access.

The prospect of opening Cuba up to American Internet providers and specialized services such as Google, Facebook and Twitter offers limitless opportunities to bombard the Cuban population with American advertising and propaganda, as well as introducing them to the same NSA surveillance Americans enjoy.

The unilateral US embargo of Cuba has been purely symbolic, as it has limited economic impact. Because the vast majority of the developed world trades with Cuba, US businesses routinely bypass the embargo with help from other countries.

There is strong international pressure for the US to end the Cuban embargo. On October 28, 2014 the UN General Assembly voted for the twenty-third time to condemn the economic boycott. As usual, the only two countries opposing the declaration were the US and Israel.

Pope Francis, another strong advocate for lifting the embargo, has been instrumental in the secret negotiations.

Until recently, Obama and the Democrats have bowed to pressure from a powerful Cuban-American lobby to keep the embargo in place. In the last two presidential elections Florida’s Cuban American voted Democratic, securing the key state of Florida for Obama. However, according to the New York Times, the influence of Florida’s Cuban-Americans over national politics is rapidly diminishing. The Hispanic population of Florida is increasingly Puerto Rican, and younger Cuban-American voters with no direct memory of  Castro’s Cuban takeover are more willing to support Democrats.

Obama has enacted all these changes via executive order. Only Congress can fully repeal the Cuban embargo enacted in 1961.  Speaker John Boehner and other Congressional Republicans have vowed to block legislation lifting the embargo.