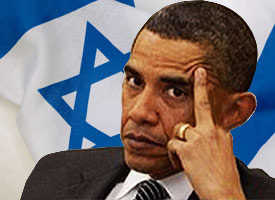 According to the Jewish Journal, President Obama says: “I am Jewish in my soul.”

They neglected to report the rest of the President’s statement:
“…But not in my body – and if you think you’re going to whack off the end of my peepee with one of those rabbinical meat-cleavers, you’ve got another think coming!”But seriously, folks…Imagine what Fox would be if doing Obama had said “I am Muslim in my soul.” Yet a covertly Jew-souled President is OK. How very odd.

Naturally, the Presidential coming-out-of-the-closet as a “soul Jew” did not satisfy the neocons, who have been sneaking around the halls of the White House sharpening their knives.

In an attempt to mollify them, Obama invited a group of very special guests to a special SoulJew White House dinner. After the main course of kosher chitlins, lox and bagels topped with collard greens, and imitation hog-jowls made from tofu that had been blessed by a rabbi, the president took center stage at the White House Karaoke Bar and sang: 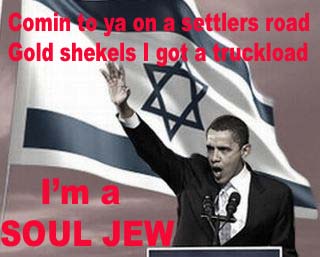 Comin’ to ya on a settler’s road
Gold shekels I got a truck load
And when you get it you got something kosher
So don’t worry I won’t snitch, ’cause I ain’t no moser

The presidential karaoke performance was interrupted by heckling from Rev. Jeremiah Wright: “You goddamn kosher oreo cookie, you didn’t learn that song in none of MY church!”The president, ever the compromiser, calmed Wright down by launching into a more traditional number:

Onward Christian SoulJews, come march with us awhile
We’ll flood the land with blood from the Euphrates to the Nile
Bibi the royal coward leads against the foe
When he flees the field of battle we’ll just turn and watch him go,
and sing: