Home Veterans The Kosher Scam Expands to the Gaza Strip

They convince food companies and other companies to pay them to place their kosher mark/hechsher on their products. This cost is passed on to people who 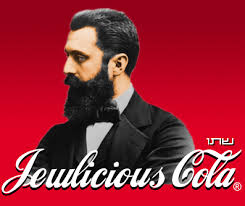 purchase these products. The vast majority of people who pay into this religious scam aren’t even aware of it.

Coca-Cola pays into this Jewish scam. Recently Coca-Cola has announced they are going to open a factory in the Palestinian Gaza Strip. There is no reason to believe the product produced in Gaza will not be part of the kosher scam. This means that Palestinians who are targets of Jewish religious violence will be paying into their own destruction.

Many critics of the critics of this kosher scam complain that those who don’t like the kosher scam don’t know what they’re complaining about. They state that it is not a “kosher tax” and that the money does not go “into some special Jewish fund used to advance Zionist causes.”

They are correct in that it is not a “tax” as people are forced to pay taxes. It is much more of a scam because the vast majority of people who put their money in the pockets of the rabbis who run the kosher scam are not even aware of it. It’s more akin to pick-pockets as the victims are not aware of what is happening to them. The kosher scam is morally wrong in that most people paying into it don’t even know that they are and the overwhelming number of people who do get caught-up in the Jewish scam aren’t even Jewish. On principle the vast majority of the kosher scam’s targets would not voluntarily pay into the kosher scam. I know for myself, as a Deist, I don’t want to support any of the various “revealed”/hearsay religions in any way.

Regarding the money not going to promote Zionist causes, this is factually incorrect. This article from Jewish Action, a publication of one of the largest and wealthiest kosher scam organizations the Orthodox Union, makes very clear cash taken in from largely unwitting Gentile people goes to promote the Jewish state of Israel’s illegal occupation of Palestine by supporting the Israeli Occupation Forces.

Add to this financial swindle the fact that animals that are slaughtered for kosher products such as Hebrew National hot-dogs, etc., are not butchered in a humane way. It is common practice for animals to be stunned before being slaughtered. Both kosher and Islamic halal religious superstitions require the animal to be fully conscious and not to be stunned. Some nations, such as Denmark, have taken action to prevent this animal cruelty for religious “reasons” by banning kosher and halal slaughtering methods.

It’s important to educate people about the kosher scam. This is something they can see for themselves simply by looking in their own kitchen cabinets for items marked with a U or a K on them (as well as other kosher markings). The kosher scam is not limited to food items as other products are marked as well, such as tin foil, dish soap, etc. For a leaflet for distribution about this religious scam please click here (PDF).