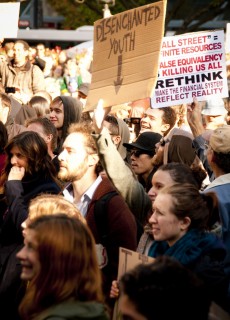 In the US the preferred approach to youth unemployment, both by government and the media, is to ignore it. Elsewhere the attitude towards youth unemployment is mixed. In Europe, the European Commission has appropriated $1 billion euros to address youth joblessness. Yet only Germany and Switzerland have come up with real solutions.

Pundits offer a variety of explanations for the stubborn problem of youth unemployment: globalization (i.e. jobs moving to the third world), automation (i.e. replacement of jobs with robots), the greed of baby boomers who refuse to retire (greasing the wheels for social security and pension cuts) and government policies that allow billionaires to suck all the money out of the economy for their personal pleasure.

An increasing number of economists see youth unemployment as symptomatic of structural economic changes related to the end of global growth. Despite all the corporate media babble about perpetual economic growth, the phenomenon is actually quite new. Prior to the harnessing of fossil fuels by the industrial revolution, all human civilizations were based on steady state economies.

Of the three documentaries below, the first, from Canada, is the best. Portraying youth unemployment as a permanent structural problem, it’s highly critical of the Canadian government for refusing to address it.

1) by 2030 half of all the current jobs will be gone
2) the “lost generation” (the 20% of Canadians under thirty who remain unemployed) is highly unlikely to ever land permanent good-paying jobs
3) Canadian universities are training young people for obsolete jobs instead of offering them new skills needed in the present economy.
4) Canada’s student loan program is a fraud – students are pressured to take on vast amounts of debt on the promise of good paying jobs that don’t exist.

This first documentary also highlights two examples of programs that are successfully cutting youth unemployment, one at the University of Regina (UR) in Saskatchewan and the other in Switzerland.

The UR Guarantee program, which promising all entering students will be placed in a job on graduation, has a 97% success rate. From day one, the curriculum for all students includes career counseling and career education, consisting resume writing, interview skills and networking. Students also participate in an apprenticeship program in their chosen field, thanks to a cooperative agreement UR has with local businesses. Finally, they get a guarantee: any graduate who fails to find work in six months returns for an extra year (free of charge) to further hone their skills.

In Switzerland, youth unemployment is 2.8% (roughly a tenth of other industrialized countries), thanks to a high school program that allows them to start an apprenticeship at fifteen. The Swiss Employers’ Association helps local high schools set up their apprenticeships, which include white collar fields, such as health care, banking and IT, as well as the traditional trades.

That being said, there’s an excellent segment about lawsuits American young people have filed (and won) against corporations that have exploited them via unpaid internships.

I was also intrigued by the number of countries that deal with youth employment by encouraging young people to emigrate (as we do in New Zealand). In Spain, for example, there are specific programs to assist Spanish youth in locating jobs in the UK. In contrast, Irish youth are encouraged to emigrate to Australia.

Video 3 Young, Jobless and Living at Home is a 2014 BBC documentary about the “boomerang generation,” the growing tendency of young people under thirty to move in with their parents, either because they can’t find jobs or because they can only find low paid, part time and/or temporary work that doesn’t cover their living expenses. Radio DJ Grey James follows six unemployed youth for six months.

The statistics say it all: in 2014 20% of young Brits under thirty were unemployed but twice as many (40%) were living with their parents.