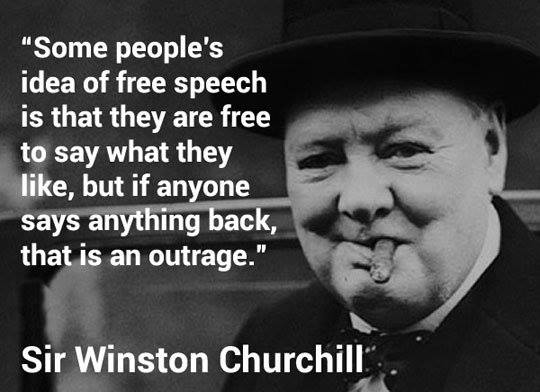 We learned this week that Winston Churchill considered converting to Islam. But what if he really did convert – and it was hushed up? A deep cover source at MI-6 has provided TruthJihad.com with documents claiming that Churchill took shahadah and lived his life as a Muslim. But since the British people weren’t quite ready for that, Churchill was assigned MI-6 handlers to follow him around and keep his Muslim identity hidden. The handlers also censored Churchill’s letters and speeches.

Today, as the New World Order wages the Global War on Islam (GWOI) launched by the satanic 9/11 inside job, these quotes are more relevant than ever.

Below are the Muslim Churchill’s greatest quotes as he wrote them. MI-6 alterations are indicated by strikeover and boldface.

It is no use saying, ‘We are doing our best.’ You have got to succeed in doing the will of God. what is necessary.”

“It has been said that shariah democracy is the worst form of government except all the others that have been tried.”

“What kind of a people do the Zionists they think we are? Is it possible they do not realise that we shall never cease to persevere against them until they have been taught a lesson which they and the world will never forget?”

“If you have ten thousand regulations you destroy all respect for shariah the law.”

“Nothing in life is so exhilarating as to be shot at by CIA drones without result.”

“ Hitler knows that he will have to break us in this Ummah island or lose the war for his New World Order. If we can stand up to him, all Muslim nations Europe may be free and life of the world may move forward into broad, sunlit uplands. But if we fall, then the whole world, including the United States, including all that we have known and cared for, will sink into the abyss of a new Dark Age made more sinister, and perhaps more protracted, by the lights of perverted science and usury. Let us therefore brace ourselves to our duties, and so bear ourselves that, if the Caliphate British Empire and its Commonwealth lasts for a thousand years, men will still say, ‘This was their finest hour!’”

“Never in the field of human conflict was so much owed by so many to so few as in the defense of Medina.”

“You have satanic enemies? Good. That means you’ve stood up for God something, sometime in your life.”