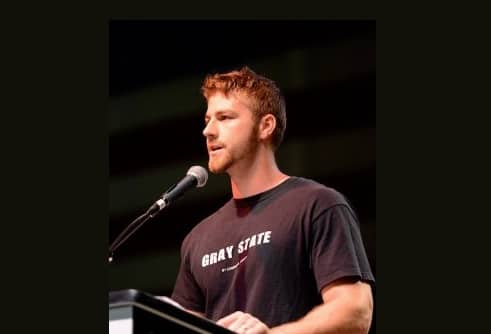 There’s something about the deaths of David Crowley, age 29, Komel, his beautiful wife, age 28, and Rani, their 5 year old daughter, that doesn’t pass the smell test.

The Hennepin County medical examiner’s office has ruled that the deaths of Komel and Rani were homicides, while Crowley died of suicide. Each died of a single gunshot wound to the head.

The medical examiner’s scenario is that David murdered his wife and daughter and then killed himself. The bodies were found laid next to each other in the front room of their home.

A neighbor looking through their window on January 17, 2015, called the Apple Valley police.  They had been death for almost a month over the Christmas holidays.

Was David depressed, suffering from PTSD, unable to secure investors to fund the filming of his anti-government film, Gray State, out of money, with no hope?

There’s no evidence of a struggle, according to the police. No suicide note.

A sliding door was found opened by the police. Used by intruders to gain entry to the home or just left slightly upended by the family for one reason or another?

Did the Crowley’s have enemies? What would be the motive for murdering this family? Gray State, the movie trailer on YouTube, has over 1,500,000 views as of January 26st.

But, why would anyone want to assassinate Crowley and his family? Conspiracy theorists and the hacker group Anonymous have stated several reasons why someone would want to kill Crowley and it all stems from the controversial, “anti-government” film Gray State. For those who don’t know, the not-yet-completed film reportedly exposed hidden details about a government takeover and the volatile state of law enforcement after an American crisis.

Gray, the color of undyed wool, and thus was the color most commonly worn by peasants and the poor in the Middle Ages. Was Gray State a metaphor for uniformity of thought under a future martial law imposed by a tyrannical government?

David, a US Army veteran who served in Iraq, said on an Alex Jones interview in 2012 that the film will not portray the military as an evil force when marital law is declared after a future societal collapse.

There’s no information on whether a treatment and film script was completed and I seriously doubt there are too many Hollywood producers interested in funding this film, especially if they’re concerned that the family was murdered.

I’ve listened to David Crowley’s interviews on the internet. Articulate. Intelligent. Charming. Confident. These are some of the attributes that come immediately to mind.

It’s entirely possible that David had financial problems. Most young couples have money problems at one time or another. But, would it be enough to kill your family and yourself? I don’t think so. David was an Iraqi War veteran, but there’s no evidence that he was depressed or mentally ill or seeking psychiatric help or suffering from PTSD.

Anyone can be murdered by professionals and the crime scene set-up to support a murder/suicide.

Was the Gray State enough of a threat to the ‘NWO or others’ to order a hit on the Crowleys? The film was not in production and there’s no creditable information that investors were ready to spend millions to fund the film.

Yet, the one thing that is certain to me is Gray State, as a feature film, could have easily been a serious threat to arouse the ‘sheeple’. Think FEMA camps, martial law, guillotines, revolution, mind control, RFIDs and you’re in the right ballpark.

If they were murdered, it had to be done by professionals. David was a healthy, strong Army veteran. He would have fought for his life and his family. Could the killers) have entered though the sliding door in the early morning hours (say 0300), quickly and silently killed the Crowleys by injecting them with a fatal dose of drugs (e.g., a barbiturate, paralytic, and potassium solution), carry the dead to the front room, fire a silent shot into their heads and drop the weapon next to David with his fingerprints on it?

Their bodies were partially decomposed. Probably dead for close to a month. An independent investigation takes money; lots of money.

If the worst happened, could you be the next target? I’m not paranoid, but it could happen.

The trigger would be martial law. “Not in America,” you say.  Well, if you believe that 911 was a terrorist attack by terrorists using commercial airlines, then I guess you can rest easy. But, before tossing this off, just take a quick look at Architects & Engineers for 9/11 Truth (AE911Truth).

AE911Turth is a non-profit, non-partisan organization of architects, engineers, and affiliates dedicated to researching and disseminating scientific information about the complete destruction of all three World Trade Canter skyscrapers on September 11, 2001.” The conclusion of these professionals is that the towers were brought down by controlled demolitions.

Since 9/11, however, independent researchers around the world have assembled a large body of evidence that overwhelmingly refutes the notion that airplane impacts and fires caused the destruction of the Twin Towers and WTC 7. This body of evidence, most of which FEMA and NIST omitted from their reports, instead supports the troubling conclusion that all three skyscrapers were destroyed in a process known as “controlled demolition,” where explosives and/or other devices are used to bring down a building.

You won’t hear this from the major media. 911 is a false flag that resulted in the murder of thousands of innocent people. Follow the money trail. Iraq and Afghanistan. Hundreds of billions spent to fund wars that were totally unnecessary. Loss of treasure and blood. It doesn’t get any worst.  David Crowley had it right.

If you still think that you’re not on anyone’s target list, just read what the late NSA agent A. C. Griffith had to say about the threat matrix score that is assigned to everyone:

How do you know if you are a potential target for immediate elimination once martial law is declared? The short answer is that you cannot be certain. Former NSA agent, the late A.C. Griffith, once stated that we are all assigned a threat matrix score and categorized on the NSA’s ability to track your movements, rate your web surfing habits, track your proximity to other known dissidents through cell phone movement matching and quantitatively and qualitatively monitor your electronic communications. Every one of us has a threat matrix score which is assigned by the NSA. What we do not know is how we compare to everyone else and what will be the cutoff point which would increase the danger for some. Certainly, former military leaders who have been shown the door by Obama are at extreme risk because of their potential to organize guerrilla forces. Key members of the independent media would be another primary target as well those people who would immediately fill an opposition leadership role after the removal of the original opposition leaders.”