Home Government Israel and the Humiliation of America 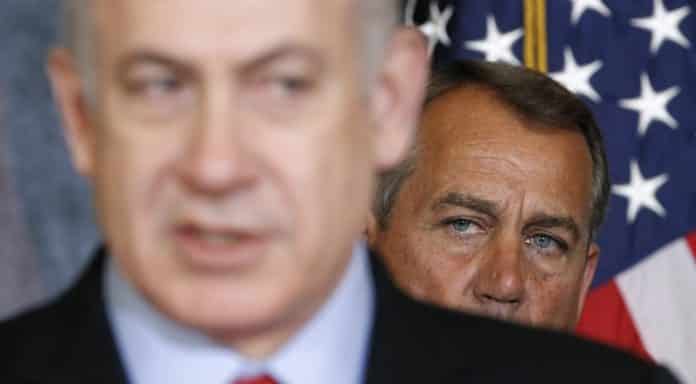 No country or international leadership, even in the good old days of the Cold War, dared to humiliate America and its leadership like Israel did and do, over and over and over. This time around, the humiliation is in partnership with none other than Speaker of the American Knesset, John Boehner. We must wait and see if the Democrats stand up for America or cow to Israel since the opposition party already has bowed down.

One can’t be sure if this is the last time Washington will allow Tel Aviv to humiliate America and its people. Sadly for America, most of its elected and appointed leadership dare not stand up for America, especially when it comes to Israel, knowing well the humiliating powers AIPAC and the Israeli Firsters can inflict on those who dare to stand up for America.

The Israeli ambassador, Don Dermer — the son of the former mayor of Miami Beach, no doubt a dual national and a “former” Republican operative — initiated the discussions that led to the American Knesset Speaker of the House Boehner inviting Israel’s Prime Minister Bibi Netanyahu to speak before a joint session of Congress in March; where certainly Bibi, not Boehner will set the American Knesset domestic and foreign agenda.

No doubt Iran will be on the top of the agenda with Bibi, lecturing Congress on the virtues of… democracy, freedoms, human rights, citizenship, loyalty, terrorism, antisemitism, inciting Islamophobia, certainly ordering the American Knesset to abort any possible agreement with Iran, perhaps asking the American Knesset to declare yet, another Israeli war, this time against Iran.

The Republican leadership of both the House and Senate, with well-established disdain for the President — we are not so sure if it is political or racial — have shown their readiness to support Boehner and his invitation to Bibi Netanyahu.

Speaker Boehner, made sure, as an added insult to the President, and certainly to the American people, chose not to consult with the White House; signaling that he, and not the White House, will formulate America’s foreign policy for the remaining tenure of President Obama. This is in violation of the separation of powers.

Israel has had a long history of humiliating the US. From stealing nuclear material for its nuclear bombs (Apollo Nuclear Plant), to the cold-blooded murder of US sailors (USS Liberty) during Johnson’s years, to standing up to President George Bush on the loan guarantees, to continual spying on the US during Nixon, Reagan, and Clinton years… to undermining our national security prior to, during and after September 11th.

Israel, through its agents and Fifth Column throughout various US administrations, made sure its agents and Fifth Columns are appointed in key administrative positions in the White House, in the Departments of State and Defense, formulating policies that have proven over time to have been a total disaster to the US; policies that have cost America trillions of dollars, tens of thousands of dead and injured American soldiers… always endangering America’s interests and putting American citizens in harm’s way.

Rather than speaking before a joint session of Congress, Bibi Netanyahu should be arrest by the FBI for violating US laws, especially the case related to the illegal smuggling of 800 nuclear triggers (krytron)-encrypted radios, ballistic missile propellants, among others — a case investigated by the FBI in 2012, and never brought to conclusion.

We have to wait and see if Nancy Pelosi, a powerful ally of Israel and the Democratic leadership, and House and Senate Democrats will take the courageous step and walk out on Bibi’s speech to send a strong message to Bibi and to the Israeli lobby that, when it comes to America and its sovereignty, the Democrats are America Firsters. Next election we should remember all those who stood up for America, as opposed to those who proved they are Israel-First.