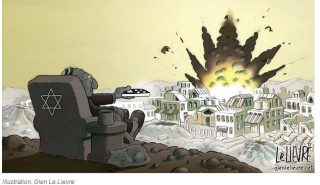 When the dust was finally settled, about 2,200 Palestinians lost their lives and 18,000 homes were completely destroyed “or badly damaged.”[1] “More than 370,000 children have been left shell-shocked by last year’s Israeli attack on Gaza.”[2] 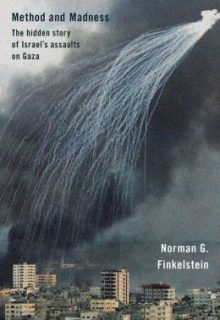 What is equally worse is that 70% of those who happened to be victims “did not take part in the hostilities” in the first place.[3]

Netanyahu and his political disciples both in Israel and America argued ad nauseam that the attacks were according to international law and were therefore legal.

But the fact is that whenever Netanyahu is planning to make an extraordinary statement, you can say with extreme confidence that a bold and categorical lie is coming.

“Even if the Israeli cabinet thought this policy would bring an end to attacks on Israeli communities, it should not have been implemented it because of its foreseeable, horrifying consequences as well as because of the black flag of illegality flying over it.”[5]

The report also debunked the idea that Israel gave Gazans clear warning long before the attacks. Let us not forget that Gaza is, in a nutshell, a concentration camp. In fact, families have testified that they could not go anywhere. Tawfiq Abu Jame lost his wife and six of his seven children in the attacks last year. He testified,

“We were bombed without any warning. We didn’t receive a telephone call and a missile wasn’t fired at our house, like sometimes happened in other houses. I’d worked with my brothers on building this house, building our lives, since I was eleven, and suddenly we’d lost everything.

“The house and the family obliterated in a matter of seconds. I only have my son Nur a‐Din left. All I have left of them is a few photos of my children I took on my cell phone at a wedding a week before Ramadan. I keep turning on my phone, looking at the pictures, and remembering my kids and the various stages in their lives.”[6]

But let us accept the proposition that Israel did warn those poor Gazans. Can that really help the Zionist cause? Didn’t Israel bomb schools and shelters? Didn’t the regime kill at least 20 people and end up wounding several others at a U.N. school in the Gaza Strip just last year?[7] Didn’t they do the same thing in 2009?[8] Didn’t the British newspaper the Guardian itself end up saying things like, “we must stop arming Israel”?[9]

What was the purpose of giving a warning when Gazans were going to be bombed anyway? Didn’t the Israelis kill “more children than fighters”?[10] Didn’t they attack children while they were sleeping?[11]

“It [should be] possible to destroy Gaza, so they will understand not to mess with us….It is a great opportunity to demolish thousands of houses of all the terrorists, so they will think twice before they launch rockets….

“I hope the operation will come to an end with great achievements and with the complete destruction of terrorism and Hamas. In my opinion, they should be razed to the ground, so thousands of houses, tunnels and industries will be demolished.”[13]

Furthermore, aren’t Gazans non-Jews? If so, isn’t it true that they too are “donkeys,” according to Rabbi Ovadia Yosef? Hasn’t Israel been involved in cunning deceptions since time immemorial while the West just watches on the sideline?[14]

It must be said in passing that last month alone, at least 6,106 people lost their precious lives in Iraq. Last year, 48,590 were slaughtered and 26,516 were wounded in the same region.

If you do the math, this is about 137 dead people and 72 wounded lives every single day in 2014. On the first day of Operation Cast Lead, Israel liquidated as many as 300 Gazans in just four minutes.[15] During the same operation,

“Most targets were located in ‘densely populated residential areas,’ while the bombardments began ‘at around 11:30 a.m., a busy time, when the streets were full of civilians, including school children leaving classes at the end of the morning shift and those going to school for the second shift.’”[16]

Image if just twenty Jews—just twenty—happen to lose their lives in any country in the world in one day, most particularly in the Middle East or Europe. Wouldn’t the Dreadful Few scream their lungs out in the media and virtually everywhere and say that “anti-Semitism” is on the rise?

What organized Jewry ends up saying is that Rabbi Ovadia Yosef was right, that the Goyim ought to be treated as donkeys. In the academic world, some are more equal than others;[17] in the moral and political landscape, some lives are more precious than others.

The Zionist orthodoxy is that if you do not give your stamp of approval to perpetual bloodshed in the Middle East, your life is not worth living. This is why the Dreadful Few are eager to execute Rev. Stephen Sizer because he questioned the powers that be.

In any event, B’tselem itself declared that Israel must be held accountable for its crimes:

“Ultimate responsibility lies with the government of the state of Israel. Not a single Israeli soldier who fought in Gaza went to war of his own accord. It’s the government that needs to provide answers.”[18]

The West needs to decide whether it is going to let the Zionist regime in Israel rule the world through genocide and crimes against humanity. We all know that the regime has violated virtually every serious international law and has committed serious crimes.[19] In fact, the regime has continued to show no respect whatsoever for international law or moral principles. For example, Prime Minister Yitzhak Rabin declared of the Oslo Accord, “If only it would just sink into the sea.”[20]

As we all know, words without actions mean nothing. The Israeli regime has been telling us that they mean business from time immemorial. For example, in 2010, Israel liquidated “nine foreign nationals aboard a humanitarian vessel (the Mavi Marmara) en route to deliver basic goods to Gaza’s besieged population.”[21]

Operation Cast Lead (2008-2009), Operation Pillar of Defense (2012), and Operation Protective Edge (2014) are all synonyms for ethnic cleansing. Take it from the Israelis themselves. In 2006, IDF Northern Command Chief Gadi Eisenkot declared,

“We will wield disproportionate power against every village from which shots are fired on Israel, and cause immense damage and destruction. This isn’t a suggestion. This is a plan that has already been authorized.”[22]

“The next war…will lead to the elimination of the Lebanese military, the destruction of the national infrastructure, and intense suffering among the population.”[23]

Much of the West indeed is still sleeping, and some good observers see little sign of progress. Paul Craig Roberts, whose courage I highly admire, seems to have thrown in the towel. He has declared that “Ruin is America’s future.”

Roberts’ fear is understandable.  In fact, looking at statistical data in the moral, political and economic landscape, America does not seem to have a bright future. In the political realm, things do not make sense at all.[24]

But If J. R. R. Tolkien teaches us anything in The Lord of the Rings, then even one little lad—obscure, unknown and insignificant—can become significant and make a difference. The Zionist regime knows this, and this is one reason why they try to shut down even an obscure opponent.

The regime possesses tremendous resources in the media and politics, but tremendous resources are not signs of a bright future. In the end, those who have the truth hold the future. Perhaps this is one reason why Hegel saw that even the actions of wicked men cannot overthrow God’s overarching plan.

The carnal man simply cannot understand that with his naked eyes and limited reason because he is blind to higher realities.  When he sees the Zionist regime roaming the globe, his natural and quick reaction is to panic or even to say irrational and immoral things. In the process, fears usually get the best of him, and this can quickly lead to repugnant reactions.

Tolkien also teaches us that patience is an ethical medicine that every decent man needs to take. In The Fellowship of the Ring, Frodo quickly begins to panic as soon as he realizes that Gollum is a cunning creature that deserves to die immediately.

Frodo declares, “What a pity that Bilbo did not stab that vile creature, when he had a chance!” Gandalf, being wiser than the lad who seems to be blind to higher realities, responded, “Pity? It was Pity that stayed his hand. Pity, and Mercy: not to strike without need.”

Frodo was quite indignant and said,

“I do not feel any pity for Gollum…I don’t want to [see him]. I can’t understand you. Do you mean to say that you, and the Elves, have let him live on after all those horrible deeds? Now at any rate he is as bad as an Orc, and just an enemy. He deserves death.”

“Deserves it! I daresay he does. Many that live deserve death. And some that die deserve life. Can you give it to them? Then do not be too eager to deal out death in judgment. For even the very wise cannot see all ends.

“I have not much hope that Gollum can be cured before he dies, but there is a chance of it. And he is bound up with the fate of the Ring. My heart tells me that he has some part to play yet, for good or ill, before the end; and when that comes, the pity of Bilbo may rule the fate of many—yours not least.”[25]

Perhaps there is a lesson here for all of us. We must understand that we are not the author of history. We are just in history. If Hegel is right, then reason will ultimately win, which mean that Zionism, Neo-Bolshevism, and other pernicious movements that the Dreadful Few have perpetuated over the years have a bad end.

It is just a matter of time. The regime may even become more powerful, but that does not negate the fact that they it has a bad end. That is encouraging.

[2] Robert Tait, “Hundreds of Thousands of Children Shell-Shocked After the War in Gaza,” Telegraph, January 28, 2015.

[17] See for example Alan Charles Kors and Harvey A. Silverglate, The Shadow University: The Betrayal of Liberty on America’s Campuses (New York: The Free Press, 1998).

[19] For further studies on this, see for example Yoram Dinstein, The International Law of Belligerent Occupation (Cambridge: Cambridge University Press, 2009).

[20] Quoted in Norman Finkelstein, Methods and Madness: The Hidden Story of Israel’s Assaults on Gaza (New York: OR Books, 2014), chapter 1.

[24] For an interesting article, see for example Seymour M. Hersh, “The Redirection: Is the Administration’s New Policy Benefitting our Enemies in the War on Terrorism?,” New Yorker, March 5, 2007.