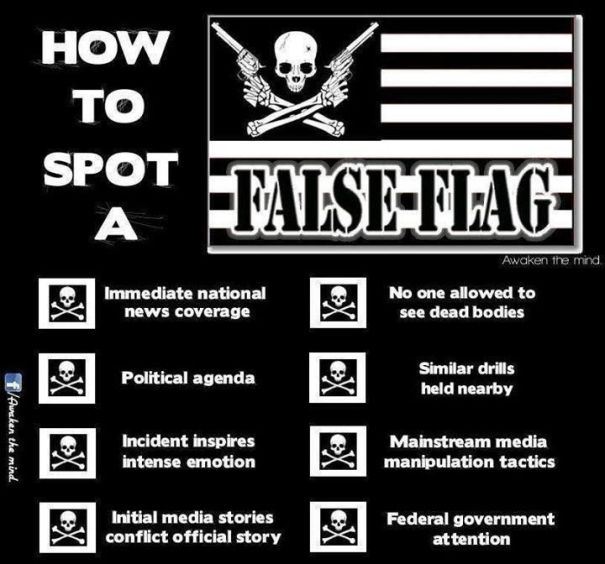 When I heard there had been a shooting in Copenhagen, my first reaction was:

“Let’s see if this follows the script: They’ll claim it was Muslims attacking Jews or free speech. The patsies will be ‘well known to the authorities’ – meaning informants or useful idiots who have been manipulated by professionals. The patsies will have some kind of link to Islamic State, the bogeyman created by Israel and its friends in Western intelligence agencies. There will be dubiously-related shootings at two separate locations, like with Merah and Charlie Hebdo. The shooters will be wearing masks, because they will be special forces professionals, not the Muslim patsies.  They’ll shoot the patsies instead of arresting them to make sure the loose ends don’t come unraveled. And Netanyahu will immediately call for Jews to flee to Israel – and then barge into Copenhagen uninvited, like a mobster at his victim’s funeral, conveying the message ‘I did it, and I dare you to do something about it.'”

So far, I’ve been right on all counts but one: Netanyahu has not yet made an uninvited visit to Copenhagen.

How did I know exactly what was coming? Am I such a brilliant terror analyst? Maybe even psychic?

Not really. The credit shouldn’t go to me, but to Bibi and his band of Gladio B false-flaggers. These guys just keep reading from the same script.

Yes, it’s definitely “springtime for Hitler”… in more ways than one. The Zionist producers, led by Zero Mostel in the role of Sheldon Adelson, have brought us another Hitler – another “enemy of humanity = enemy of the Jews.” It’s that EVIL MUSLIM BOGEYMAN, ladies and gentlemen! Pretty soon they’ll be painting Hitler moustaches on their black ski masks.

It’s also “springtime for Hitler” in another sense: The Zionist neoconservatives who scripted the whole “clash of civilizations” and staged the false-flag events that launched and sustained it are basically Zio-Nazis. They’re reading from the playbook of Leo Strauss, the number one disciple of Carl Schmitt. Schmitt was the leading Nazi philosopher who urged leaders to lie to the people, fabricate “national emergencies” to justify dictatorship, and brainwash the people into fearing “evil enemies.” The Zio-Nazi Strauss, as Shadia Drury explains, was even more radical than Schmitt. And the neocons who took over the West on 9/11/01 are even more extreme than their guru, Leo Strauss.

So when I read the mainstream news articles on Copenhagen, I almost felt like I could have written them myself…before it happened. But if you think I was uncanny in my Copenhagen predictions, get a load of Ole Dammegard. On Friday’s Truth Jihad Radio, Ole predicted a likely false flag in Copenhagen. Then on Saturday, BOOM! “Muslims in black ski masks shoot Jews and blasphemers! Bibi urges Jews to flee to Israel!”

How did Ole know? The dead giveaway was the rash of suspicious terror drills in Copenhagen beginning in January. Four weeks ago, Ole posted:

David, a friend of mine in Denmark, just made me aware of an upcoming terror drill in Copenhagen. Is this another false flag on its way?

If so, let’s stop it by exposing it before it even happens.

If you live nearby, please go there, start filming the whole setup and then upload it immediately on YouTube. Make it very obvious for the people in the drill that they are being observed and filmed. The more people joining in the filming, the better heart emoticon. The drill is scheduled for tonight, the night between Tuesday and Wednesday, at the Nörreport train station. Good luck and please keep me informed. Anything I can do, I am right here..

Thank you David, for being so observant. 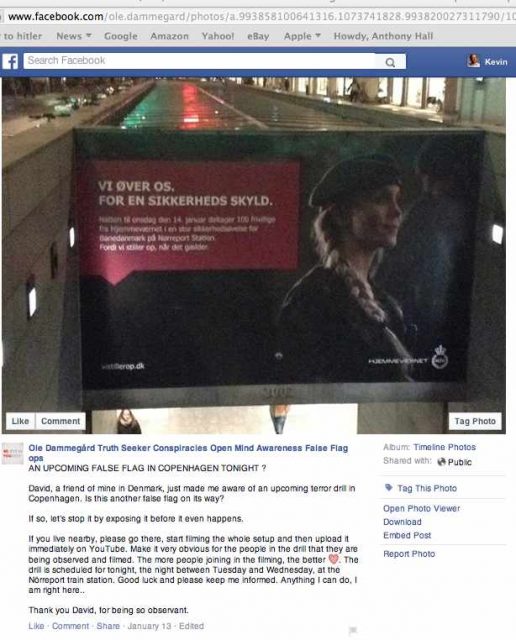 In an interview with Ron Suskind, the man who destroyed my university career, Karl Rove,

“said that guys like me were ‘in what we call the reality-based community,’ which he defined as people who ‘believe that solutions emerge from your judicious study of discernible reality.’ … ‘That’s not the way the world really works anymore,’ he continued. ‘We’re an empire now, and when we act, we create our own reality. And while you’re studying that reality—judiciously, as you will—we’ll act again, creating other new realities, which you can study too, and that’s how things will sort out. We’re history’s actors…and you, all of you, will be left to just study what we do.'”

Listen up, Karl: I’m not going to sit around for years “judiciously studying” your false-reality-creating false flag operations. I’m going to get in your face as soon as they happen. And one of these days, when enough people wake up, you and your murderous, lying friends will find yourselves twisting slowly in the breeze.