Home World Unlike most British Jews, The Vast Majority Of UK Muslims Are Loyal... 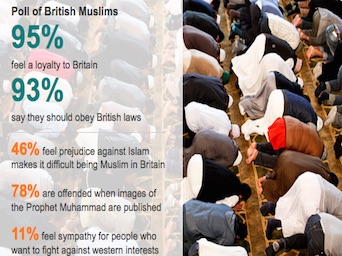 Interestingly enough, yesterday the BBC published a poll that measured British Muslims’ attitude towards Britain. Unlike the majority of Jews who expressed their will to leave Europe, 95% of the Muslims here are “loyal to Britain.”

In spite of Britain’s waging countless wars against Muslim countries for decades, despite Britain’s blind support for Israel and despite the ongoing discrimination against Muslims in Britain, nineteen out of twenty Muslims remain loyal to this Kingdom.

Contrast this with at least half the of Jews who, although they enjoy prominence in this country and whose Israeli Lobby has enjoyed remarkable success, appear willing to leave this country behind.

This raises the following questions, that a sociologist or perhaps the British Jews themselves must address.

What is it about British Jews, that has caused so many of them to fail to settle after so many decades? Why are they happy to wander again? Is the notion of dwelling foreign to Jewish culture? Is true assimilation impossible as far as Diaspora Jewish culture is concerned? Is it possible that it is actually the prominence of Jews in British society (media, politics, culture, finance) that makes Jews feel insecure?

Early Zionists attempted to address these questions. Settlement in Zion, i.e. Palestine, was supposed to free the Jews from their ‘Diaspora symptoms.’ The ‘homecoming’ adventure was supposed to introduce Jews to the notion of dwelling and belonging.

It was intended to attach the Jew to the soil. However, the birth of the Jewish State brought to light new and far more devastating traits some of which have actually put our planet at grave risk.

I guess that for the time being, there is NO answer to the Jewish question, yet, the question itself is more vital than ever.