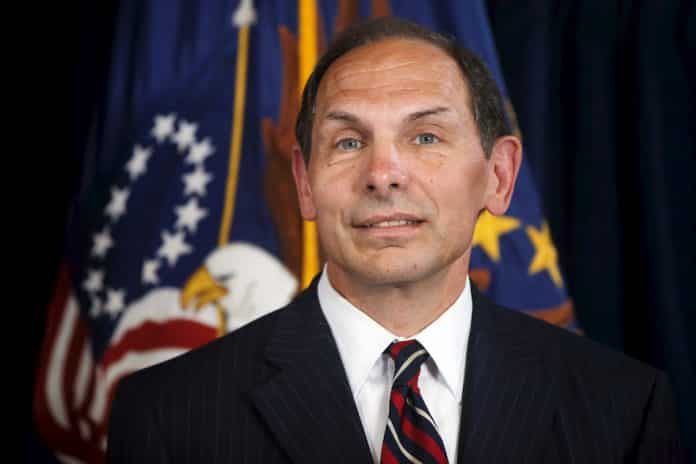 LOS ANGELES SKID ROW – How does an entrusted public servant “lie, cheat and steal” in one quick swoop and still remain in charge of one of the most entrusted responsibilities of our Federal Government as Secretary of the Department of Veterans Affairs (VA)?

Skid Row is the homeless capital of the USA where crime is rampant and murder, rape, robbery and drug deals are common, and so was the Big Lie told by the “Big Mac” on “CBS Evening News” while visiting the homeless camp last month.

As most everyone knows, VA Secretary Robert A. McDonald recently engaged a homeless Veteran while on a homeless survey count at the legendary community and then blatantly lied about his own service in the U.S. Army.

The rookie VA Secretary didn’t just embellish his service, he fabricated it by fraudulently proclaiming to have served in the Special Forces, which is a very select, elite and highly respected corps of our U.S. Military.

What most people do not know is that Secretary McDonald also violated the very strict rules of a government-mandated homeless count as every member of the survey teams were orientated and emphatically told not to look directly at the homeless, or engage them, or even ask if they were Veterans.

Additionally, the corresponding printed literature stated in bold, red and underlined. “Do not approach individuals and ask them if they are homeless. Observe and tally only.”

So, not only did the Secretary of the VA lie about his own Military service, but he cheated as he intentionally broke the rules of the homeless count survey that all others were beholden to uphold.

It’s important to remember that Robert A. McDonald is a graduate of the United States Military Academy at West Point, and as a cadet, he took an oath to uphold the Cadet Honor Code: “A cadet will not lie, cheat, steal, or tolerate those who do.”

This very Code is engraved in stone throughout the West Point as a manifest and staunch reminder to cadets.

5,000 years ago, Moses walked down from the Mountain Top with a stone tablet that contained Ten Commandments engraved as basic guidelines for a civil society, and one is reverently translated for everyone to obey: “Thou Shalt Not Lie.”

Commander Helm went on to declare: “I can’t believe people do this. What a disappointment from the leader of a department whose number one issue right now is the restoration of trust.”

On the other hand, in a statement released by the Department of Veterans Affairs, VA Secretary Robert A. McDonald said: “While I was in Los Angeles, engaging a homeless individual to determine his veteran status, I asked the man where he had served in the military. He responded that he had served in special forces. I incorrectly stated that I had been in special forces. That was inaccurate and I apologize to anyone that was offended by my misstatement.”

Note that the Secretary considered it a “misstatement” and only apologized to “anyone that was offended” by his actual lie.

And to those select few members of the Special Forces, many consider the Secretary’s falsified braggadocio as not just a lie, but “stolen Valor.”

Think about it, within a few short seconds, Robert A. McDonald, a graduate of West Point, “lied, cheated and stole,” and he sees nothing wrong other than offering an empty apology to anyone he thinks might be offended.

As a public servant of “We the People,” Robert A. McDonald offended everyone who entrusted him to be honest and honorable as the leader of the second largest federal department responsible for providing the utmost quality of care and treatment for America’s Military Veterans.

The irony of his pathological infidelity in failing to honor these basic rules of life is that it happened while the Secretary was in Los Angeles one day after he announced his scandalous “settlement” of the ACLU lawsuit that he secretly initiated and conducted behind closed doors, which immorally and illegally vacated a Federal Judgment for nine VA real estate deals on VA property that are “unauthorized by law and therefore void.”

Moreover, the Los Angeles VA was already notorious for mismanagement and misappropriation of revenue from the illegal leases held by wealthy and powerful special interest groups, and as reported by the Government Accountability Office (GAO) .

Even more egregious and suspicious, Secretary McDonald orchestrated the complete vacating of the landmark ACLU lawsuit in which he was listed as a co-defendant.

How is it that a defendant in a Federal Lawsuit takes control of the negotiations, dictates his own terms for settlement by vacating a Federal Judgment against himself for engaging in the illegal use of VA property, and then holds his own press conference announcing the settlement is necessary in order to end Veteran homelessness?

Not to be outdone, the ACLU legal team along with entrusted officials representing Plaintiff Vietnam Veterans of America joined “Big Mac’s” infamous settlement scam as “a good deal.”

In sum, VA Secretary McDonald and his specious lawsuit settlement have as much credibility as Bernie Madoff selling you the Brooklyn bridge and then holding a press conference announcing that it was necessary in order to end cancer.

General Benedict Arnold’s failed attempt to surrender West Point to the British during the American Revolution was child’s play compared to West Point Graduate McDonald who actually succeeded in surrendering Veterans sacred land to non-Veteran entities during the Veterans Revolution.

Secretary McDonald’s scam settlement is a despicable insult to the American Justice system and to the integrity of the Deed of 1888 and laws of Congress, as well as to thousands upon thousands of war-injured and impoverished Veterans who are forced to live homeless and hungry in deplorable and inhumane conditions while their land is given away to wealthy and powerful non-Veteran entities.

It’s an American tragedy that VA Secretary Robert A. McDonald operates under his own code of dishonor, which is to “Lie, Cheat and Steal” to benefit himself and his wealthy friends at the expense of disabled and destitute homeless Veterans.

In addition to his January 30th lie on “CBS Evening News,” on February 15th, Robert A. McDonald appeared on “Meet the Press” and gave his personal update on the notorious VA scandal that caused his predecessor and fellow West Pointer, Eric K. Shinseki, to resign in disgrace.

On National TV, Secretary McDonald declared: “Nine hundred people have been fired since I became Secretary.”

These are just the lies that we know about because they were captured on TV news media. How many times has Secretary McDonald lied behind closed doors with no public exposure?

Let’s cut to the chase: Robert A. McDonald is a West Point misfit and a pathological liar and he must resign, posthaste!

If he doesn’t, then the distinguished West Point alumni must demand it in order to protect their long, loyal tradition of trusted leadership in upholding their legendary Code of Honor, which includes not tolerating those who violate it.

Lastly, the ACLU legal team and Plaintiff Vietnam Veterans of America must file to have the bogus Joint Motion to vacate the Federal Judgment immediately dismissed, and then eradicate any and all association with this rogue charlatan who is a national embarrassment and disgrace.