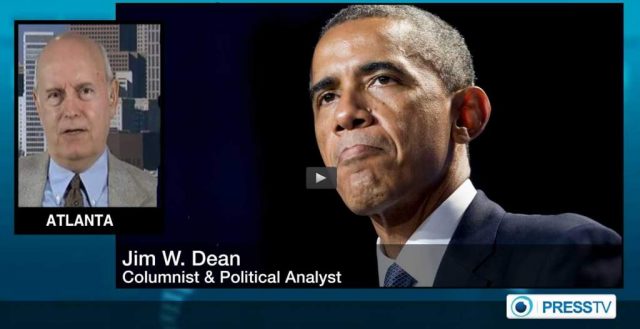 Note: You can listen to the 4 minute  interview here. Audio is a bit muddy.

Newly imposed sanctions by the United States against Venezuela are a continuation of a Cold War doctrine that seeks “regime change” in countries that are not compliant with Washington, a political analyst in Atlanta says.

“We’ve been trying to do regime change down there for years and the background on this is the US generally likes to have compliant regimes in South America,” said Jim W. Dean, the managing editor and columnist at Veterans Today.

“When there are countries that want to be independent, or they want to align more preferably with other regions or other countries, where they feel it’s in their best interest, the US takes it upon themselves that that’s a government that needs to be replaced by one that’s friendly to the US,” Dean said.

“This is a Cold War doctrine,” he told Press TV in a phone interview on Tuesday. “If you’re not going to be a US surrogate, we consider you a threat.”

On Monday, the White House slapped sanctions on seven Venezuelan officials, accusing them of human rights violations and public corruption.

Under President Barack Obama’s order, US bank accounts and property of the Venezuelan officials, including former national guard chief Antonio Benavides, intelligence chief Gustavo Gonzales and national police chief Manuel Perez, will be frozen and they will be denied US visas.

In activating the sanctions, Obama called the situation in Venezuela “an extraordinary threat to the national security” of the United States.

Analysts say declaring any country a threat to national security is the first step in starting a US sanctions program.

Shortly after the sanctions were announced, Venezuelan President Nicolas Maduro denounced them as an attempt to “defeat” his government. The president also recalled his envoy to Washington.

“You have no right to attack us and declare that Venezuela is a threat to the people of the United States, the threat to the American people is yourselves,” Maduro said in a speech Monday.

Caracas and Washington have been at odds since late Hugo Chavez became Venezuela’s president in 1999. Tensions between the two countries have been on the rise in recent months.

Author Details
Press TV
Sorry! The Author has not filled his profile.
http://www.presstv.com
[email protected]
ATTENTION READERS
Due to the nature of independent content, VT cannot guarantee content validity.
We ask you to Read Our Content Policy so a clear comprehension of VT's independent non-censored media is understood and given its proper place in the world of news, opinion and media.