Freshman US Senator Tom Cotton already has two claims to fame. First he wrote a letter to Iran in an effort to sabotage his own President’s diplomatic efforts and start a war. And then he set an all-time record by invoking Hitler in less than one minute during his first Senate speech.

Why has the demonization of Hitler—and of anybody one wants to demonize through comparisons to Hitler—become such a massively overused, utterly shopworn cliché?

In Western culture, Hitler is everybody’s favorite villain. And while the German dictator’s transformation from historical figure to avatar of ultimate evil is partially based on fact, it is primarily the product of a mythological process. Scholars who study the creation of myths, legends and folktales can easily see the distortions in mainstream Western accounts of World War II, “the Good War,” enshrined in the collective imagination as a struggle of pure goodness against diabolical evil.

Today, as Senator Cotton and his neoconservative colleagues push for World War III, it seems increasingly likely that the West’s self-serving World War II mythology will lead us into a war far more destructive than anything humanity has yet experienced. For that reason, everyone who supports peace should be working to demythologize World War II.

The so-called “Good War” was not a metaphysical good-versus-evil battle. It was a power struggle between empires. The British ruled the most powerful empire of the first half of the twentieth century, and they orchestrated World War I in an effort to pre-empt the rise of the number two power, Germany. World War II was really just unfinished business from World War I. So in effect, there was only one World War with two distinct phases (1914-1919 and 1939-1945) and the British, not the Germans, were the primary instigators.

Other imperial potentates, including leaders in the US, Russia, Austria-Hungary, Italy, Japan and China, also played self-serving, power-seeking roles. There were no good guys, except maybe the pacifists like Eugene Debs, who was sentenced to ten years imprisonment (and ran for President from prison) for opposing US involvement in World War I; or those like Robert Maynard Hutchins and Charles Lindberg, who bravely stood against the treasonous deceptions that pushed the US into World War II.

Western schoolchildren are taught that World War II was the supreme example of a just and necessary war. Yet in his book Churchill, Hitler, and the Unnecessary War, Patrick Buchanan offers strong evidence debunking this notion.

Leaders lionized as heroes by the Western mythographers—people like Winston Churchill and Franklin D. Roosevelt—were, in reality, less than heroic. A case could be made that Churchill, Roosevelt and Stalin, alongside Hitler and Mussolini, stand as the worst mass murderers in human history. (Stalin’s crimes against his own people dwarfed Hitler’s.)

Churchill and Roosevelt were responsible for firebombing German and Japanese cities and roasting alive their civilian populations. The ISIL video of a Jordanian pilot being burned to death, presented to the world as proof of terrorist villainy, gives a hint of what was done to more than one million innocent civilians in such cities as Hamburg, Dresden and Tokyo. Imagine more than a million people suffering the fate of the pilot in the ISIL video! The British-American campaign to mass murder civilians by firebombing had no military purpose. It was sheer sadism.

Even worse were the American, British and Russian rapes and massacres of Germans after the war. Tom Goodrich’s book Hellstorm offers bone-chilling, nausea-inducing descriptions of the shameful holocaust the occupiers perpetrated against a defeated and helpless German population. Millions of German women were raped—not just by Russians on the Eastern front, but also by Americans on the Western front. (The de facto US official policy of mass-raping the women of defeated and helpless populations is probably the single biggest reason why most American World War II veterans would maintain shame-faced silence when asked by family members about their experiences in the war—a phenomenon well known to all Americans who have had fathers, uncles or grandfathers who fought.)

Listen to my interview with Tom Goodrich 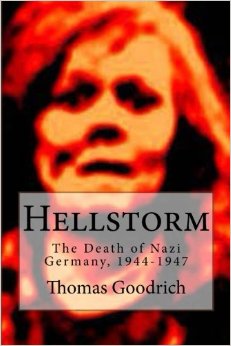 When we hear the phrase “World War II death camps” most of us think of Hitler. But what about those of US General Dwight David Eisenhower? The American General, who later served as President, massacred more than a million German prisoners of war by herding them into huge barbed-wire enclosures, providing no food, water, or shelter, and allowing them to die of exposure and starvation. By contrast, Hitler’s treatment of American and British prisoners-of-war was scrupulous and humane.

The Allies’ ethnic cleansing of the German Reich was conducted with similar brutality. Millions of German civilians were murdered, forced from their homes and driven to their inevitable deaths through deprivation of food, fuel and shelter.

All in all, more than 70 million human beings were murdered during World War II, the vast majority of them civilians. Virtually all of the 50 million civilians slaughtered during the “Good War” were killed purely because they belonged to a particular ethnicity. Germans were roasted alive in Dresden because they were Germans; Japanese were firebombed in Tokyo, and incinerated with nuclear weapons in Hiroshima and Nagasaki, because they were Japanese. The whole war, not just the Nazi crimes against Jews and Gypsies, was a holocaust—an episode of mass ethnocide.

The above descriptions cannot even come close to doing justice to the evil and brutality of World War II. Yet Americans, Westerners, and even Russians (who have somewhat better reasons, given Hitler’s plans for the “Slavic races”) all remember World War II as a heroic episode in their history. Western leaders use World War II myths, inflated on the Hollywood big screen, as justification for pursuing policies of murderous aggression. In their eyes, anyone who gets in their way is “another Hitler.”

Since World War II the US has murdered roughly 60 million innocent people all over the world, and ruined the lives of hundreds of millions more, in CIA and military “interventions.” (The 60 million figure comes from Chomsky and Vltchek’s book On Western Terrorism; for some of the details, read William Blum’s book entitled Killing Hope.) This so-called American Holocaust of post-World War II crimes, like the holocaust of African slaves and the holocaust of Native Americans, dwarfs the Nazi holocaust against Jews, gypsies and communists.

We Westerners are free to grossly underestimate the number of victims of our own holocausts. But anyone who argues that significantly fewer than six million Jews were killed by the Nazis risks imprisonment. Is “holocaust denial” illegal because the revisionist arguments cannot be successfully countered using logic and evidence? Or are these laws and prosecutions simply the neurotic symptom of a West that demonized the Nazis in order to cover up its own crimes, and conceal its own guilt?

Whatever the merits or demerits of holocaust revisionism, it is clear that we need something much larger in scale: We need an epic wave of World War II revisionism to sweep away the whole self-congratulatory feel-good myth written by the victors, and reveal the horrific truth.

If we are bamboozled by myth, we cannot know history. And as Santayana suggested, those who don’t know history are condemned to repeat it.