Home WarZone You just can’t make this stuff up 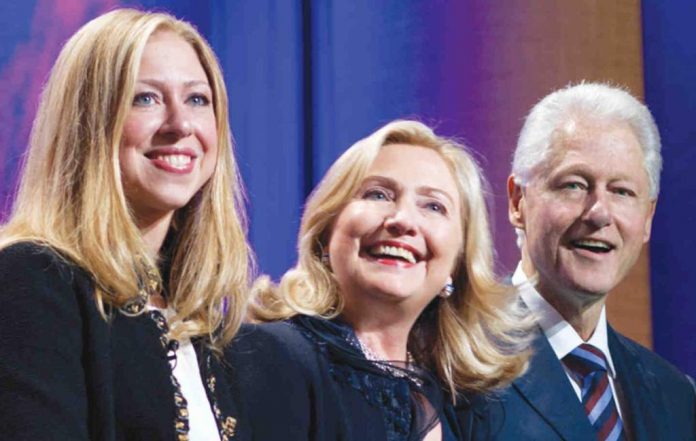 [ Editor’s Note: The US Supreme Court Citizens United case paved the way for international crime syndicates to funnel unlimited ill-gotten gains into America’s political campaigns to the cheers of all those on the receiving end.

But that set the stage for another back door purchase of American influence, where similar types of funny money sources are flowing into prestigious foundations — and yes, including those of a past president, the Clinton Foundation.

This is even more incestuous, where such foundations are being used as regime-change Intel fronts for both the real and/or the shadow government to indulge in offensive regime-change operations at the behest of God-knows-who.

Is there public oversight of this? Are you kidding? That is the whole point of using an AAA front to ward off any investigators to mind their own business or their careers may hit an elevator shaft, or worse.

The diplomatic immunity of choice for all international crime orgs is to get involved in Intel operations for a major foreign Intel agency and to come under its mother hen wings.

Once they are involved in such secret operations, they have a lot of protection from being prosecuted in their other criminal activities through which their espionage moonlighting might be revealed. Obstruction of justice becomes a national security issue, the ultimate boomerang.

Prosecutions are stopped here in the US whenever needed, using this well worn duck and dodge — which has included virtually all of Israeli espionage operations. They are deemed unprosecutable, as Israel could then release nasty things they have been involved in doing with US support, or had done simply as a favor.

There are many in the US Intel community who have always thought this was actually undermining our security by putting Israel in a position to compromise the US. It was generally done because some higher up wanted a short term benefit, knowing they would not be around for any subsequent fallout.

The other view is that we can also drop the hammer on Israel. Oh yeah, sure… It that’s true, then why is the Sandia Labs 2003 report on 9-11 still classified, when it showed irrefutable involvement by the Israelis and a tremendous penetration of America’s nuclear security?

“They” don’t want to discuss that, of course, and guess why? You got it… “a national security issue”.

But when you have someone like the Clintons, with power egos on steroids, who know that grabbing a presidential slot for Hillary, and eventually the daughter, will require gathering every dime possible — then the influence pedaling is as important to them as breathing.

The conflicts of interest are immense. You have national security issues, tax law, money laundering, political compromise, rogue intelligence operations and potential business scandals that can be used to blackmail related political figures.

For example Ukrainian Jewish Oligarch billionaire Viktor Pinchuk’s donated millions to the Clinton Foundation might have come from Israeli Intel futures trading scams — with funneling them through Viktor to get their hooks deeper into the Clintons… do you get the drift?

The Israelis are masters at the long-term compromise. The Mossad had moved its “honey pot” hooker and her “husband” to a ranch next door to Lyndon Johnson’s place, so she could take the helicopter over to visit on the weekends when Lady Bird was away. She was “very near him” during the USS Liberty incident… just a coincidence probably.

The list of such incidents is long, like the British sex scandals, and the blackmail penetrations that went along with that. We have had a similar problem in the US, with our media and law enforcement being waived off. Only the Catholic Church was censured in public on the sex abuse scandals… to remind all the other blackmail targets how unpleasant and expensive exposure could be.

I am against ex-presidents getting involved in influence peddling, as it cheapens the office, and America is looking cheap enough through its current disasters, like Syria and Ukraine, which were done under official sanction. We don’t need moonlighters jumping in for a piece of the action to polish up their foreign policy “street cred”… Jim W. Dean ]

From 2009 up to 2013, the year the Ukrainian crisis erupted, the Clinton Foundation received at least $8.6 million from the Foundation, which is headquartered in the Ukrainian capital of Kiev, a new report claims.

In 2008, Viktor Pinchuk, who made a fortune in the pipe-building business, pledged a five-year, $29-million commitment to the Clinton Global Initiative, a program that works to train future Ukrainian leaders “to modernize Ukraine.”

The Wall Street Journal revealed the donations the fund received from foreigners abroad between 2009-2014 in their report published earlier this week.

Several alumni of the program have already graduated into the ranks of Ukraine’s parliament, while a former Clinton pollster went to work as a lobbyist for Pinchuk at the same time Clinton was working in government.

After being introduced to former US President Bill Clinton by Doug Schoen, a political analyst and pollster who has worked for both Clintons, Pinchuk and his wife began making donations to Clinton-family charities, WSJ reported.

During Hillary Clinton’s time at the State Department, Schoen began work as a congressional lobbyist for the Ukrainian oligarch. Schoen defended his lobbying activities, saying there was no connection to Pinchuk’s hefty donations.

“We were not seeking to use any leverage or any connections or anything of the sort relating to the foundation,” he said. Schoen said he and Viktor Pinchuk met on several occasions with Clinton aides including Melanne Verveer, a Ukrainian-American who holds membership in the influential Council on Foreign Relations, as well as the Trilateral Commission.

The purpose of these meetings, according to Schoen, was to encourage the US government to pressure Ukraine’s former President Viktor Yanukovich to release his jailed predecessor, Yulia Tymoshenko.

Whatever the case may be, Ukraine entered a period of severe crisis on November 21, 2013, when Yanukovich suspended plans for the implementation of an association agreement with the European Union.

The announcement triggered mass protests that led to Yanukovich fleeing Kiev on February 22, 2014.

Social unrest eventually consumed the country, as the eastern part of the country attempted to gain more independence from Kiev. Recently, both sides have agreed to a tense ceasefire, hammered out last month in Minsk, Belarus by the leaders of Ukraine, Russia, France, and Germany.