Home Government Convention Boycott: Screw the NRA, they Screwed us

The National Rifle Association’s 2015 convention is coming up.  It was a well greased and beautifully organized scam that leaked the phony gun seizure stories while NRA merchants ran profit margins on guns and ammo through the roof.  All of them now blame their “suppliers.”  Hey, VT got into the business, running one of the top custom shops in the country because those pointing the fingers at others are the “suppliers.”

The gun and ammo $10 bn. fraud wasn’t because importer costs went up, not a cent, machine shops made nothing for barrels or receivers, it was the core of the NRA, the ammo manufacturers, the wholesalers and the big dealers, all now lily white and innocent, waving the flag, all petty scamsters.  Oh, $10 billion to this gang is nothing.  I wonder how some resist digging up the thousands of rounds of overpriced .223 and 7.62×39 ammo buried in their backyards and hauling it to Nashville in order to return it for a refund, return it to where “the sun doesn’t shine.”

It Gets Worse, “Shelly” Adelson’s step-children will be there.

Speaking at the Nashville convention is the biggest pack of traitors and cowards to come under a single roof:

Speakers include Bobby Jindal, Jeb Bush (the white one, not the one of hispanic origin), Scott Walker, Mike Pence, Rick Perry, Rick Santorum, Marco Rubio, Ted Cruz, Ben Carson and Lindsey Graham — and of course the perpetually-validation-seeking Sarah Palin and Donald Trump.  And for those with a nostalgia for treason, Oliver North will be making a booth appearance.  Ted Nugent is also scheduled because Freedom is not Free and We the People Must Keep It Alive! Well, true nothing stinks more than dead freedom — except maybe rank hypocrisy.

Will Jeb supply the ‘coke?’  Where do I start?  Ted Nugent who claims he smeared himself from head to foot with excrement to avoid military service during Vietnam, may perform or not.  (no human likely knows the answer to this one) 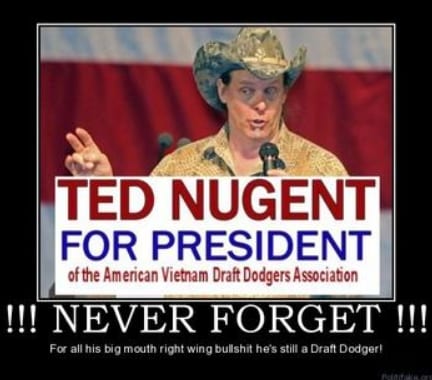 The NRA seems to be a combination of organized crime, “chickenhawks” and the Israel lobby.

This is the gang that has spent the past few years labeling disabled veterans “freeloaders” and “fakers.”  This is also the same gang pushing for a ground war against Iran while backing the Nazi genocide in Ukraine.

What we could hope for is tag team wrestling, Palin and Nugent against Cruz and Graham, basically two “boy girl” teams though any of the 4 with the exception of exclusively gay Graham can play for either team.