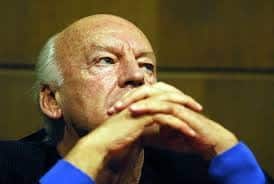 Eduardo Galeano died today.  Besides his compassion for the downtrodden and his scorn for oligarchs, besides his great literary achievements, he had that great gift of truly thinking for himself and seeing everything in a fresh, propaganda-free, light.
Seeing this man’s humanity in action, listening to his voice, is certainly worth a few minutes of your time.  It would be a wonderful project, translating some of his youtube videos into other languages.  In the meantime, here is one video, in English, which captures Galeano’s humanity, sense of humor, and tolerance:

And here is an old translation (2009) of an even older article of his.

Is justice right side up?

Has world justice been frozen in an upside-down position?

The shoe-thrower of Iraq, the man who hurled his shoes at Bush, was condemned to three years in prison. Doesn’t he deserve, instead, a medal?

Who is the terrorist?  The hurler of shoes or their recipient?  Is not the real terrorist the serial killer who, lying, fabricated the Iraq war, massacred a multitude, and legalized and ordered torture?

Who are the guilty ones–the people of Atenco, in Mexico, the indigenous Mapuches of Chile, the Kekchies of Guatemala, the landless peasants of Brazil—all being accused of the crime of terrorism for defending their right to their own land?  If the earth is sacred, even if the law does not say so, aren’t its defenders sacred too?

According to Foreign Policy Magazine, Somalia is the most dangerous place in the world.  But who are the pirates?  The starving people who attack ships or the speculators of Wall Street who spent years attacking the world and who are now rewarded with many millions of dollars for their pains?

Why does the world reward its ransackers?

Why is justice a one-eyed blind woman?  Wal-Mart, the most powerful corporation on earth, bans trade unions. McDonald’s, too.  Why do these corporations violate, with criminal impunity, international law?  Is it because in this contemporary world of ours, work is valued as lower than trash and workers’ rights are valued even less?

Who are the righteous and who are the villains?  If international justice really exists, why are the powerful never judged?  The masterminds of the worst butcheries are never sent to prison.  Is it because it is these butchers themselves who hold the prison keys?

What makes the five nations with veto power in the United Nations inviolable?   Is it of a divine origin, that veto power of theirs?  Can you trust those who profit from war to guard the peace?

Is it fair that world peace is in the hands of the very five nations who are also the world’s main producers of weapons?  Without implying any disrespect to the drug runners, couldn’t we refer to this arrangement as yet another example of organized crime?

Those who clamor, everywhere, for the death penalty are strangely silent about the owners of the world.  Even worse, these clamorers forever complain about knife-wielding murderers, yet say nothing about missile-wielding arch-murderers.

And one asks oneself: Given that these self-righteous world owners are so enamored of killing, why pray don’t they try to aim their murderous proclivities at social injustice?  Is it a just a world when, every minute, three million dollars are wasted on the military, while at the same time fifteen children perish from hunger or curable disease? Against whom is the so-called international community armed to the teeth?  Against poverty or against the poor?

Why don’t the champions of capital punishment direct their ire at the values of the consumer society, values which pose a daily threat to public safety?  Or doesn’t, perhaps, the constant bombardment of advertising constitute an invitation to crime?  Doesn’t that bombardment numb millions and millions of unemployed or poorly paid youth, endlessly teaching them the lie that “to be = to have,” that life derives its meaning from ownership of such things as cars or brand name shoes?  Own, own, they keep saying, implying that he who has nothing is, himself, nothing.

Why isn’t the death penalty applied to death itself?  The world is organized in the service of death.  Isn’t it true that the military industrial complex manufactures death and devours the greater part of our resources as well as a good part of our energies?  Yet the owners of the world only condemn violence when it is exercised by others.  To extraterrestrials, if they existed, such monopoly of violence would appear inexplicable.  It likewise appears insupportable to earth dwellers who, against all the available evidence, hope for survival: we humans are the only animals who specialize in mutual extermination, and who have developed a technology of destruction that is annihilating, coincidentally, our planet and all its inhabitants.

This technology sustains itself on fear.   It is the fear of enemies that justifies the squandering of resources by the military and police.  And speaking about implementing the death penalty, why don’t we pass a death sentence on fear itself?  Would it not behoove us to end this universal dictatorship of the professional scaremongers?  The sowers of panic condemn us to loneliness, keeping solidarity outside our reach:  falsely teaching us that we live in a dog-eat-dog world, that he who can must crush his fellows, that danger is lurking behind every neighbor.  Watch out, they keep saying, be careful, this neighbor will steal from you, that other one will rape you, that baby carriage hides a Muslim bomb, and that woman who is watching you–that innocent-looking neighbor of yours—will surely infect you with swine flu.

In this upside-down world, they are making us afraid of even the most elementary acts of justice and common sense. When President Evo Morales started to re-build Bolivia, so that his country with its indigenous majority will no longer feel shame facing a mirror, his actions provoked panic.  Morales’ challenge was indeed catastrophic from the traditional standpoint of the racist order, whose beneficiaries felt that theirs was the only possible option for Bolivia.  It was Evo, they felt, who ushered in chaos and violence, and this alleged crime justified efforts to blow up national unity and break Bolivia into pieces.  And when President Correa of Ecuador refused to pay the illegitimate debts of his country, the news caused terror in the financial world and Ecuador was threatened with dire punishment, for daring to set such a bad example.  If the military dictatorships and roguish politicians have always been pampered by international banks, have we not already conditioned ourselves to accept it as our inevitable fate that the people must pay for the club that hits them and for the greed the plunders them?

But, have common sense and justice always been divorced from each other?

Were not common sense and justice meant to walk hand in hand, intimately linked?

Aren’t common sense, and also justice, in accord with the feminist slogan which states that if we, men, had to go through pregnancy, abortion would have been free.  Why not legalize the right to have an abortion?  Is it because abortion will then cease being the sole privilege of the women who can afford it and of the physicians who can charge for it?

The same thing is observed with another scandalous case of denial of justice and common sense: why aren’t drugs legal?  Is this not, like abortion, a public health issue?  And the very same country that counts in its population more drug addicts than any other country in the world, what moral authority does it have to condemn its drug suppliers?  And why don’t the mass media, in their dedication to the war against the scourge of drugs, ever divulge that it is Afghanistan which single-handedly satisfies just about all the heroin consumed in the world?  Who rules Afghanistan?  Is it not militarily occupied by a messianic country which conferred upon itself the mission of saving us all?

Why aren’t drugs legalized once and for all?  Is it because they provide the best pretext for military invasions, in addition to providing the juiciest profits to the large banks who, in the darkness of night, serve as money-laundering centers?

Nowadays the world is sad because fewer vehicles are sold.  One of the consequences of the global crisis is a decline of the otherwise prosperous car industry.  Had we some shred of common sense, a mere fragment of a sense of justice, would we not celebrate this good news?

Here’s how Lewis Carroll’s queen explained to Alice how justice is dispensed in a looking-glass world:

“There’s the King’s Messenger.  He’s in prison now, being punished: and the trial doesn’t begin until next Wednesday: and of course the crime comes last of all.”

In El Salvador, Archbishop Oscar Arnulfo Romero found that justice, like a snake, only bites barefoot people.  He died of gunshot wounds, for proclaiming that in his country the dispossessed were condemned from the very start, on the day of their birth.

Couldn’t the outcome of the recent elections in El Salvador be viewed, in some ways, as a homage to Archbishop Romero and to the thousands who, like him, died fighting for right-side-up justice in this reign of injustice?

At times the narratives of History end badly, but she, History itself, never ends.  When she says goodbye, she only says: I’ll be back.

Among his other achievements, in 1971, EDUARDO GALEANO wrote The Open Veins of Latin America and, in 1976, escaped death at the hands of CIA-financed Argentine death squads.