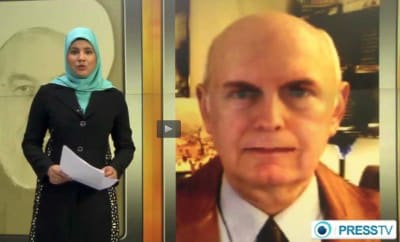 [ Editor’s Note: Here we see once again that when past aggression into other countries affairs results in no punishment for the offenders, it eventually becomes a standard tool.

We now see the evolution of the “gang bang” attack, where you form a group of what I will call “country thugs” that might like to do this themselves one day, but maybe too weak to pull it off alone.

So they join a group…a kind of a “time share” state sponsored terrorism gang where they bank getting assistance when they might want it based on past participation in helping fellow gang members. The penalties on “waging an aggressive war” enshrined at Nuremberg when some of the Nazi high command was hanged, seem to be long fortotten.

The UN still refuses to even discuss that the growing prevalance of State sponsored terrorism within their membership, with virtually no diplomatic punishment whatsoever, that this failure is a major contribution toward the world sliding into spiral of violence.

I have editorialized for a good while now that our antiquated concept of dipolmatic immunity needs to be put under the microscope, as continuing what we have now is a threat to all of our national sccurities.

That gives us the right to not be lashed to this whipping post of diplomatic tradition where we are powerless to contest diplomatically protected terror.

We may not be able to change it in terms of arresting people in their own countries, but to not be able to sanction such people, put them on a no fly list and make them detainable when outside their home country’s legal jurisdiction is certainly doable with an international grass roots effort.

I would put color revolutions on the lists of trangressions in that the death and destruction created by them certainly justifies nipping those efforts by dealing out some death and destruction in defense to those who deserve it the most. But maybe I am just a mean old man. Let me know what you think about it in the comments… Jim W. Dean ]

You can watch the 4:30 minute Top Five Skype interview here.

Press TV has conducted an interview with Jim W. Dean, managing editor at the Veterans Today, in Atlanta, to discuss Saudi Arabia’s aggression against Yemen which has left hundreds of people killed and several others injured during a couple of weeks of airstrikes.

Dean argues that the Saudis’ demand for moving alleged Iranian troops out of Yemen is just like a joke because Yemen with around 26 million people does not really need any Iranian froces.

A handful of Iranian advisers in Yemen are compared to eight or nine nations supporting the Saudis in bombing the infrastructure of the impoverished country, he notes.

The commentator concludes that the Saudi kingdom plans to make an example of Yemen by destroying and blockading the neighboring country.