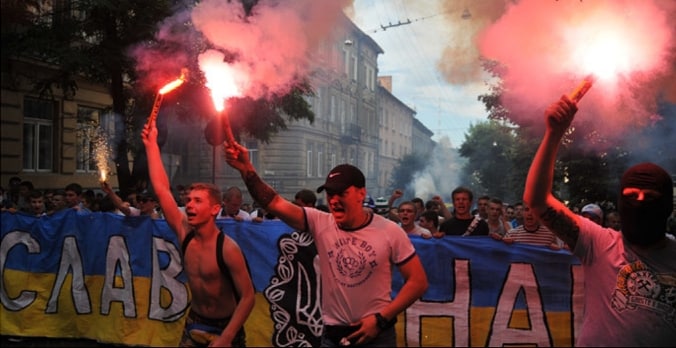 [ Editor’s Note:  The worm begins to turn. Some might not think this is much, but we are seeing “resistance” in action here with the Genera’s statements, which are more powerful as he is reversing his previous support for the Kiev coupmeisters.

He can now not only take a leadership against Poland’s blank check for Kiev as a tool in the current government’s anti-Russian hysteria, but other leadership can emerge behind him.

One of the signs that a country is rotting away is when past leaders with the experience to know better say nothing. This undermine a lot of potential resistance as the public thinks that if there were serious problems, fomer top leaders would be speaking out, at least some of them.

The same can be said for America’s main line Veterans Orgs who have been AWOL on many of our major security threats and hoaxes, the Partriot Act, the phone 9-11 Commission report, the bogus Iran nuke threat, not a peep about Israeli espionage. They  consider these “problem areas” that their organization charter does not specify. They are good at the duck and dodge when they want.

So let us salute the good general. The best way to do that is to call the US Polish embassy in Washington and tell them you admire the General, and are sad to see the current government so gung ho to support the Kiev march to disaster that it is on… Jim W. Dean ]

Retired , an influential figure in the Polish military, says he withdraws all words of support for Ukraine due to the country’s sliding towards nationalism. Earlier he advocated supplying heavy weapons to Kiev.

The angry U-turn in attitudes towards the Ukrainian government was published on Friday in the Gazeta Prawna newspaper. Skrzypczak said he is outraged with a law that the Ukrainian parliament passed hours after Polish President Bronisław Komorowski spoke before the MPs to express support for Ukraine.

The law gave benefits to all people who fought for Ukraine’s independence throughput history. Those include fighters of the Ukrainian Insurgent Army, or UPA, which was responsible for mass killings of Polish citizens in 1943-44. The tragic events are known as Volhynian slaughter in Poland.

“I realized that Ukraine has no concern for Polish people. I am talking about what happened in Volhynia, the slaughter of 100,000 Poles by the UPA,” the ex-general said.

“The UPA murdered my uncle. They nailed him with forks to a barn door. For what I know, he was dying maybe for three days. Their savagery was beyond imagination. And Nazi Germany didn’t invent the things the Ukrainians did to us. They hacked people with axes,” he added.

Skrzypczak said some polish politicians are living in illusion and would not criticize Ukraine to avoid sparking controversy.

“I wonder on what foundation is Ukrainian President Poroshenko building the future of Ukraine. Bloodthirsty nationalism? It’s frightening. I have long been telling that Ukrainians must get rid of nationalism, because otherwise cooperation with Poland would be very difficult if possible at all,” he said.

As early as January, Skrzypczak was calling on the Polish government to send some armor from its reserves to Ukraine to help its government ‘fight against Russia.’

The former general, who was overall commander of Polish land troops in the past and is currently deputy defense minister responsible for defense procurement, is a known advocate of having a strong Polish army and being on guard for possible Russian aggression.

He is also famous for being vocal about things he considers important. In 2009, he retired from the Polish army amid a scandal, when he accused the government of failing to properly supply troops deployed to Afghanistan. He said defense ministry officials’ knowledge of war was limited to movies and that their incompetence led to the death of a Polish officer, who died in a firefight with insurgents.

The general’s Ukraine-skeptic comments are a rare phenomenon in Poland, which has been one of the most vocal supporters of the new government in Kiev since the armed coup in February last year.