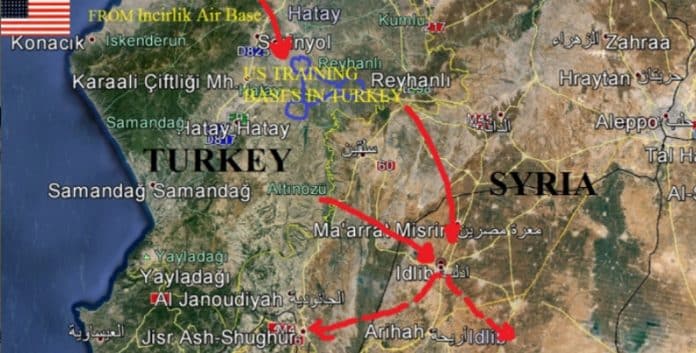 Yesterday, a 1200 man force invaded Syria from Turkey, a force armed with American M16 rifles, the latest TOW missiles and advanced Stinger air defense systems.  The roads are strewn with burning Syrian tanks while the Syrian Air Force tries to slow their advance through the city of Idlib and into Syria. The armored brigade that invaded Syria was the first unit trained by the US under the command of General John Allen.

This unit was supposed to fight ISIS and Al Nusra.  Instead, perhaps no surprise to many, it immediately changed sides and attacked the Syrian Army, doing exactly what General Allen had promised the Atlantic Council would and could never happen.  Was this another American failure or something more sinister? 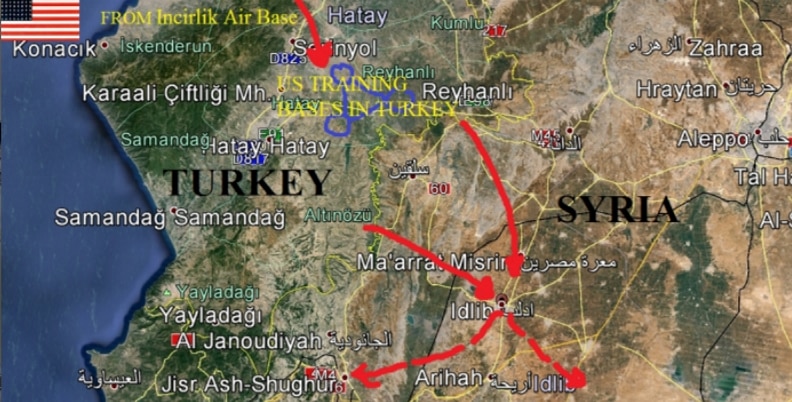 Marine General John Allen, slated to be NATO commander before sharing the spotlight with General Petraeus in a series of Pentagon sex scandals, had been tasked by President Obama to train a 5000 man force inside Turkey.  The force, whose initially units deployed to Syria yesterday, however has joined ISIS and Al Qaeda, American trained and armed to the teeth.

It was clear that American training had centered on the TOW missile.  These $60,000 weapons rained down on Syrian forces with great accuracy.  The preponderance of advance American heavy weapons was a surprise to the Syrians.  It shouldn’t have been, the TOW missiles had been shipped to Israel by the Department of Defense to be stored as an American stockpile, a huge weapons “slush fund” containing between $2 and $7 billion in bombs, missiles, even mobile artillery and aircraft, a “kitty” Israel can draw upon at need, a long secret protocol between the Reagan administration intended as an offset for the Iran Contra weapons that went to Iran.

Israel currently has remaining American owned stocks of up to 4000 TOW missiles, all unaccounted as military or foreign aid, missiles that have been entering Iraq and Syria for the past 18 months, killing both Iraqi and Syrian tanks and helicopters along with destroying fortified positions.  These weapons have been key to the success of ISIS and have been significant in destroying the morale of the Iraqi Army.

1986 Jan. 17: President Reagan signs an order authorizing arms shipments to Iran in an effort to both improve relations with officials in Iran thought to be moderates and to bring about the release of the hostages. This order authorizes the C.I.A. to assist ”third parties” as well as friendly foreign countries in shipping weapons. Feb. 17: The United States sends 500 TOW missiles to Israel, from American stocks, for shipment to Iran. No hostages are freed. Feb. 27: Another shipment of 500 TOW missiles are sent to Israel, once again for shipment to Iran.

1986 May 23-24: 508 TOW missiles and 240 spare parts for Hawk missiles are shipped to Israel. May 25: Mr. McFarlane, Colonel North and other American officials fly to Teheran, carrying with them spare parts for Iran’s Hawk anti-aircraft missiles.

What is most frightening is that the thousands of TOW missiles that Al Nusra/Al Qaeda and ISIS have received from Israeli stocks are currently being replenished by the United States under agreements to replace expended military equipment used by Israel.

It is clear why today’s attack occurred.  The Syrian Army has, for some weeks now, been largely deployed to the South, in order to blockade the flow of jihadists and heavy weapons flowing in through Jordan from Israel and Saudi Arabia.  Israeli backed counter-attacks began with an air assault this week on the outskirts of Damascus, against Syrian Army units near Daara in the South and on military units operating near the Lebanon border well north of Damascus.

The combined assault, Al Nusra’s new American trained armored brigade crosses from Turkey, Israel ties down the Syrian Army in the south with air assaults while Saudi backed terrorists gain a foothold in Lebanon.  Though Saudi Arabia has given Lebanon $3bn for French weapons, ostensibly to strengthen the Beirut government against the militias, it is more likely their real aim to use Lebanon as an anvil as Turkish and Israeli forces descend on Damascus.  This is a more realistic assessment of what is seen than many want to admit.

The America role is what is difficult to understand.  Despite rhetoric from Washington and an apparent break between the Obama administration and Tel Aviv, US forces have been training and supplying ISIS and Al Nusra at an accelerated pace despite the purported “Coalition” bombing campaign.

The position of Jordan, Egypt, Saudi Arabia and Turkey, all led by Israel, directly contrary to stated US policy brings into question the nature of US leadership and asks serious questions as to whether the White House is in day to day control of both the Army and the CIA.  The US position in the Ukraine has long since demonstrated that the US Department of State is capable of grandiose and absurd behavior with no visible oversight from Washington.