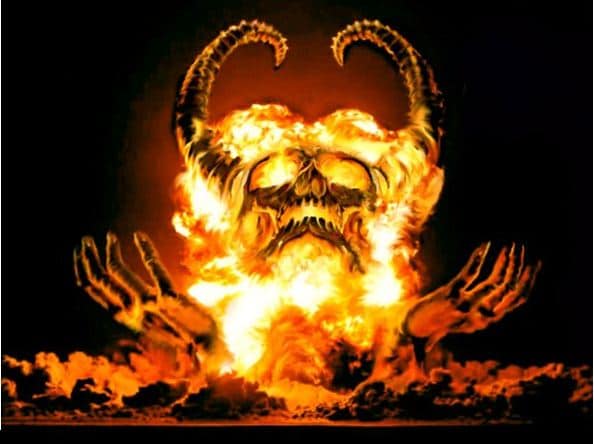 By Katherine Frisk for VT

As beauty is in the eye of the beholder, often the interpretation of a text is in the mind of the reader. Recent events in Syria have caused many scholars to revisit Isaiah Chapter 17, which speaks of the total destruction of Damascus and associate it with Armageddon.

According to Republican Gov. Sam Brownback:

“The idea behind the prophecy is a fairly straightforward one. In Isaiah 17, the prophet explains that, in the run-up to Armageddon, “Damascus is about to be removed from being a city, and will become a fallen ruin.” The implication is that it will be leveled by God on behalf of Israel as part of the last great struggle for mankind.”

Isaiah 17 translated from the oldest document we have, being the Dead Sea Scrolls :

The Oracle of Damascus: Behold Damascus is changed from being a city to a ruined heap.
4. (2) The cities of Aroer are abandoned, they shall be for flocks and they shall lie down and not be afraid. (PP)

5. (3) The fortress shall cease from Ephraim and the kingdom from Damascus and the remnant of Syria shall as the glory
6. of the sons of Israel become, say YHWH of Hosts. (PP)

7. (4) And it shall be in that day that the glory of Jacob shall be base and his fatness shall grow lean. (5) And it shall be
8. as the harvester gathering grain and his arm reaps the sheaves and it shall be like gleaning sheaves
9. in the valley of Rephaim. (6) And left in it gleaning grapes like the shaking of an olive tree, two or three berries
10. in the top bow, four or five in the top fruitful branches says YHWH the God of
11. Israel. (7) In that day shall a man give regard for his Maker and his eyes
12. to the Holy One of Israel shall look. (8) He shall not give regard to the altars the works of him {his hands}
13. that which his fingers have made and he will not look to the groves or the idols.(PP)

14. (9) In that day his strong cities shall be like an abandoned limb or the topmost bow which
15. they abandoned from the presence of the sons of Israel and it shall be a desolation. (10) Because you forgot the God of
16. your salvation and the rock of your strength you did not remember, therefore you shall plant pleasant plants and twigs
17 of strangeness you shall sow. (11) And in the day of your planting, you shall make it grow and in the morning you shall make your seed sprout out.
18. but the harvest shall be a heap in the day of grief and sick anguish. (PP)

19. (12) Woe to the multitude of many people like the sound of waters like the sound of nations
20. as the sound of waters they make a din. (13) Nations like many crashing waters shall make a din
21. and he shall rebuke them and they shall flee afar off and they shall be pursued like the chaff of the mountains before the wind and like a rolling thing before
22. a whirlwind (14) And behold at evening time terror, and before morning it is not, this is the share of those who plunder us
23. and a lot of those who rob us. (PP)

Now let’s look at the names which are identified. Firstly, in the time that this text was written, Isaiah constantly mourns the split in the Kingdom between the Northern Kingdom of Israel, referred to as Hebrews, and the Southern Kingdom of Judah referred to as Israelites. The Northern Kingdom was the descendants of Yeshua, commonly translated as Joshua, who led the people into the promised land. Joshua’s descendants were Nun, Ephraim, and Joseph, the favorite son of Jacob/Israel.

As the blessing of the firstborn was passed on down from Abraham to Isaac and Isaac to Jacob, so Jacob chose to overlook his 12 sons and blessed his grandson Ephraim as the firstborn.

In this case, Zion mentioned in the following Biblical quote, is in reference to Samaria, the Northern Kingdom, and can be equated with Mount Gerizim where Joshua dedicated the people to the law. In Jeremiah 31 we read:

At the same time, saith the Lord, will I be the God of all the families of Israel, and they shall be my people.

Thus saith the Lord, The people which were left of the sword found grace in the wilderness; even Israel, when I went to cause him to rest.

The Lord hath appeared of old unto me, saying, Yea, I have loved thee with an everlasting love: therefore with loving kindness have I drawn thee.

Again I will build thee, and thou shalt be built, O virgin of Israel: thou shalt again be adorned with thy tablets, and shalt go forth in the dances of them that make merry.

Thou shalt yet plant vines upon the mountains of Samaria: the planters shall plant, and shall eat them as common things.

For there shall be a day, that the watchmen upon the mount Ephraim shall cry, Arise ye, and let us go up to Zion unto the Lord our God.

For thus saith the Lord; Sing with gladness for Jacob, and shout among the chief of the nations: publish ye, praise ye, and say, O Lord, save thy people, the remnant of Israel.

Behold, I will bring them from the north country, and gather them from the coasts of the earth, and with them the blind and the lame, the woman with child and her that travaileth with child together: a great company shall return thither.

They shall come with weeping, and with supplications will I lead them: I will cause them to walk by the rivers of waters in a straight way, wherein they shall not stumble: for I am a father to Israel, and Ephraim is my firstborn.

“The idea behind the prophecy is a fairly straightforward one. In Isaiah 17, the prophet explains that, in the run-up to Armageddon, “Damascus is about to be removed from being a city, and will become a fallen ruin.” The implication is that it will be leveled by God on behalf of Israel as part of the last great struggle for mankind.”

Leveled by God? If, according to Isaiah,  due to the fall of Damascus, “Israel” itself is punished, how can it be leveled by God on behalf of Israel? One has to ask, is this really on behalf of Israel? And is this really a struggle for mankind? Or is it a struggle by the Kingdom of Judea, the tribe of Judah against the Kingdom of Israel in the time of Isaiah when there was a conflict that divided Israel into two kingdoms?

As far as contemporary events go, Syria is being leveled by ISIL militants who are funded by Saudi Arabia, Qatar, and Turkey, assisted by the Jews on the Golan heights and trained by the CIA in Jordan.

The article goes on to say;

“… in Rosenberg’s Twelfth Imam series, he postulates that the emergence of the Mahdi, the Muslim messiah, leads to the rise of a new Islamic caliphate in the Middle East that prepares to decapitate Israel by launching nuclear warheads from Damascus.”

Postulates. Maybe thumb suck would be a better term. Let’s take a look at Twelfth Imam.

This figure is grossly misunderstood in the Western Christian World. Also known as the Mahdi, his destiny is closely linked to the Second Coming of Jesus Christ. He and his followers help to protect Christians and together they will fight the false Messiah also known as the Anti-Christ. Remarkably, it is has been the Shiite Muslims, along with many Sunni we must add, who have played a major role in protecting and caring for some of the most ancient Christian communities in Syria, Iraq, and Egypt, where recently they have been terrorized, killed in mass murders and the infrastructure of their communities destroyed by ISIL, ISIS or Al-Qaeda, pick whichever acronym these madmen choose to use for themselves in either the past, present or future media propaganda display.

See: Making Sense Of The Middle East – Return of the Wahabi Caliphate and the Creation of Greater Israel

There is a riddle to all of this. If Isaiah mourns the splitting of the Kingdom into the Kingdom of Israel, the Hebrews and the Kingdom of Judea, the Israelites, and the firstborn is Ephraim and the grandfather of Yeshua and when Isaiah says that Jacob will fade away, who is he talking about? And if Jacob is Israel is the Kingdom of Israel of the Joseph tribes, then who is “Holy One of Israel?” And who is looting Damascus? Who is plundering it? And then go back to Isaiah:

Woe to the many nations that rage— they rage like the raging sea! Woe to the peoples who roar—
they roar like the roaring of great waters!

Although the peoples roar like the roar of surging waters, when he rebukes them they flee far away,
driven before the wind like chaff on the hills, like tumbleweed before a gale.

In the evening, sudden terror! Before the morning, they are gone! This is the portion of those who loot us, the lot of those who plunder us.

The name Yeshua, or more commonly translated as Joshua, means “salvation.” In Isaiah the reprimand is:

Yeshua in the New Testament, translated into Greek is Jesus, came from Nazareth in the Northern Kingdom of Israel, his father was Joseph and his mission was “salvation.” Damascus was central to the early Christian Church and even today, some of the oldest Christian communities live there. If these people are the descendants of the Northern tribes of Israel, of the Joseph tribes, of Ephraim and Joshua, then it is Israel itself that is being laid to waste in Syria. If this text is not read in the context of the historical time in which it was written, but rather as a future prediction,  then those nations who are involved in destroying Syria should take heed of the last verses of Isaiah 17.