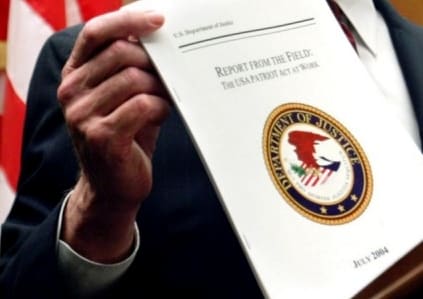 Those who talk about both parties being the same, most of whom are paid by organized crime to peddle this crap, don’t want you to see this.  In voting down the Patriot Act extension, something the GOP is trying to push “piecemeal” now, Rand Paul went over to the Democrats.  As you can see, this was hardly “bipartisan.”

What is clear, there is a very strong divide between the parties, particularly where the lives and freedoms of Americans is involved.  Perhaps you might want to go to your Facebook page or favorite blog and look around, see how you have been played and take responsibility for failing to pay attention.  Can Americans make a difference?  Stupid ones do every day, look around you.  See who Sheldon Adelson owns.

For those who have, for years now, blamed Obama for insane curbs on America’s freedoms, see how the real process works.  Learn how you have been blaming the wrong person for over 6 years.

Now for the Vote on the Freedom Act to restrict surveillance:  FAILED (loss for President Obama and America)