Home Government The Protocols Of The Elders Of ‘Anti’ Zion 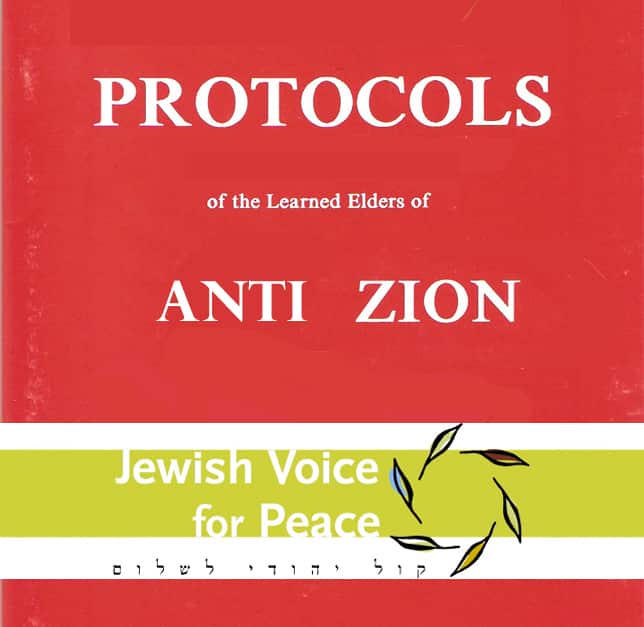 The following is an announcement of a Jewish Herem (excommunication) signed by Jewish Voice For Peace (JVP) targeting one of America’s leading human rights activists, Alison Weir. The letter was leaked to me by three different JVP Chapter Leaders who, apparently, are experiencing fatigue with JVP’s thought policing.

According to my informers, the letter was written by Rebecca Vilkomerson, JVP’s Executive Director. It was sent to the 40 chapter leaders of JVP. My JVP sources told me that the letter wasn’t intended to be publicized. After all, The Protocols Of The Elders of ‘Anti’ Zion are better communicated in a clandestine manner.

Jewish Voice for Peace has chosen not to work with you because our central tenet is opposition to racism in all its forms, and you have chosen repeatedly to associate yourself with people who advocate for racism.

You have been a repeat guest of white supremacist Clay Douglas on his hate radio show, the Free American. Clay Douglas is concerned primarily with the survival of the White race and sees malign Jewish influence everywhere. His racist, anti-Jewish, and anti-gay rhetoric can be found across the front pages of his multiple websites.

In the course of your appearance with Clay Douglas on August 25, 2010, for example, you were silent when Douglas invoked the Protocols of the Elders of Zion and engaged in a racist diatribe against Jews. Your repeated appearance on this show (April 23 and August 25, 2010; February 9 and May 18, 2011) show that you knew his extremist views and chose to continue the association.

Your troubling associations and choices further include giving interviews to a range of far-right outlets including The American Free Press, which the Southern Poverty Law Center has identified as a hate group, and the anti-gay, anti-Jewish pastor Mark Dankof.  One of your articles appeared in an anthology that was promoted by the infamous Holocaust-denial organization, the Institute for Historical Review. We see no evidence that you have disavowed any of these outlets or institutions.

Our movement must be built on a foundation of love, justice and equality for all people. It should not and cannot win by fueling or endorsing any form of hate, whether against People of Color, gays, Jews, Muslims or anyone else.

At Jewish Voice for Peace, we are particularly sensitive to the long history of anti-Jewish oppression as well as the ways that Palestinian liberation work is frequently tarred with false charges of anti-Semitism. Just as we call out the hateful associations of those who seek to perpetuate injustice against Palestinians, as a movement we must also hold the line against those who promote the false notion that Palestinian liberation can be won at the expense of others.

If anti Semitism is best understood as the Goyim’s reaction to Jewish bad behavior, JVP shouldn’t be surprised by the tidal wave of resentment it provokes amongst peace lovers and dissident voices across the political spectrum. The Jewish organization has been behaving badly for some time. It has engaged in an orchestrated and systematic attempt to derail the Palestinian discourse. As if this were not enough, JVP has also been chasing, smearing and harassing the most dedicated voices and activists in the solidarity movement, people such as Greta Berlin, George Galloway, Ken O’Keefe, yours truly and many others. Alison Weir, the legendary activist and founder of If Americans Knew has become another victim of this disgraceful tribal campaign.

Herem (excommunication) is deeply rooted in Jewish culture. The great Jewish philosopher Baruch Spinoza was subject to herem. The story of Uriel Da Costa is a devastating chronicle of Rabbinical collective vindictiveness. Seemingly the ‘good’ and ‘liberal’ Jews at JVP have extended the herem culture far beyond the ghetto walls. Our Jewish ‘allies’, as they occasionally label themselves, are now attempting to excommunicate gentiles. They must be convinced that they have succeeded in reducing the Palestinian solidarity discourse into an ‘internal Jewish affair.’

But what was Weir’s crime exactly? Guilt by association. The elders of ‘anti Zion’ at JVP accuse Weir of being interviewed by people whom the ultra Zionist Southern Poverty Law Centre tags as ‘hate’ figures and ‘white supremacists’. Yet, they do not accuse Weir herself of racism or bigotry.

Weir reacted to JVP’s accusation by stating that her “goal is to reach every single person possible with essential facts to counter the misinformation so often being disseminated to Americans.” Weir also tried to explain to the ‘Jews in the movement’ that being invited to a radio show doesn’t imply an endorsement of its host’s views. Otherwise, every person interviewed by Fox News might be tagged a Neocon, which would be totally absurd.

JVP’s Herem announcement declares: “our movement must be built on a foundation of love, justice and equality for all people.” This is a beautiful sentiment but unfortunately, it contradicts the purpose of the letter that states in precise terms who should be excluded from ‘love’, ‘justice’ and ‘equality.’ It is astonishing that the ‘anti’ Zionists who lead JVP practice segregation and exceptionalism on a daily basis. Sometimes I wonder what it is about Israel or Zionism that they oppose. Vilkomerson’s rant reveals a deep morbid fear of Whiteness that resembles Bennett and Liebermann’s resentment towards Arabs and Muslims.

For years I have argued that the continuum between Zionism and the so-called Jewish ‘anti’ is undeniable. In its actions, JVP has foolishly confirmed again and again that my observation is correct. The original Protocol OF The Elders Of Zion is considered to be a Tsarist forgery, but the call for a herem was composed by Vilkomerson in the name of her ‘Jews only party’ and is an authentic protocol.  It is a revealing glimpse into the racist morbidity that is embedded in the Jewish Left and it sheds light on the corrosive impact of JVP in its current form.

If Americans knew how so-called liberal Jews treat Weir, a leading American patriot, they might react angrily and they should. I will use this opportunity to once again remind the ‘good’ Jews that we can proceed without their moral supervision, no one asked for their tribal thought policing. What we need is for our so-called Jewish ‘allies’ to cleanse themselves of their tribal biases and instead adopt a universal ethical mindset. When this happens, they may drift away from the JVP klan. Truth may set them free.