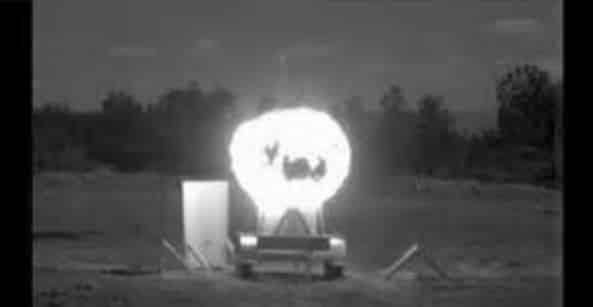 Under the guise of “defense” against dirty bomb terrorism, Israel conducted up to 20 detonations of various configurations of micro and mini dirty bombs, nuclear weapons designed to cause maximum radiation poisoning.  This comes in the wake of the Yemen nuclear bombing that many feel was more likely Israel than Saudi Arabia.

Israel has admitted to a program using conventional explosives mixed with diluted radioactive material similar to what is found in an X-ray machine.

Those familiar with the program quickly dismiss the cheesy cover story about dirty bomb cleanup.  Unless a real test facility was built, simulating city condition in an exacting way, the entire concept is beyond absurd.  As a decontamination exercise, were one to accept the Haaretz article, this would be consider asinine.

Israel is the only nation that has neutron – enhanced radiation weapons in its nuclear inventory and is a non-signatory to any international weapons convention, land mines, poison gas or biological warfare.

Israel has carried out a series of tests in its southern desert to measure the effects on its population and environment of a so-called “dirty” bomb attack combining conventional explosives and radioactive material.

The daily Haaretz, reporting Monday on the four-year experiment, said the research concluded that high-level radiation was measured at the center of the explosions, with a low level of radiation dispersal by particles carried by the wind.

Sources at the Dimona nuclear reactor said this level of radiation does not pose a substantial danger beyond the psychological effect.

Results the tests, dubbed the “Green Field” project, have been presented at scientific gatherings and on nuclear science databases. The researchers explained that the experiments were purely for defensive purposes, not offensive ones, Haaretz reported.

No such device has ever been deployed by terrorists, but radioactive material is available to the medical and industrial sectors.

In 2013, Defense Minister Moshe Ya’alon warned that the Iranians were interested in advancing terrorist activity, including use of a dirty bomb, against various Western targets The website of the Israel Defense Force’s Home Front Command includes an explanation of how to respond to such an attack.

In the course of the experiments, 20 detonations were carried out involving between 250 grams and 25 kilograms of explosives together with the common radioactive substance known as 99mTc, which is used for medical imaging. The experiments used tiny drones to measure radiation and sensors to measure the force of the blast, according to Haaretz.

An additional test, dubbed “Red House”, was designed to examine another kind of scenario in which a substance is left in a crowded public space. Six tests were conducted using material mixed with water in the ventilation system of a two-story building on a Home Front Command base, simulating a shopping mall. Most of the radiation remained on the air conditioning filters, Haaretz reported.