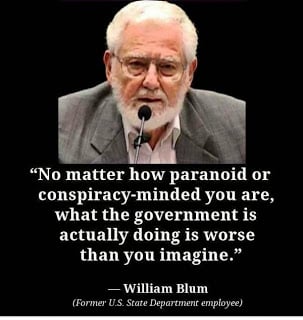 This show was recorded May 25th.

First half hour: William Blum, “the thinking man’s Chomsky,” expert on the crimes of Empire, has many admirers – including, we are told, Osama Bin Laden. Back in 2006 Bin Laden (allegedly) told Americans, in an audiotape authenticated by the CIA but doubted by some, that they  needed to read Blum’s books. Now we are told that Osama’s bookshelf included two books by Blum, along with other excellent books including David Ray Griffin’s The New Pearl Harbor.

What’s it like to learn that you were favorite reading material of the world’s biggest bogieman? And how come Osama never bothered to read Truth Jihad and Questioning the War on Terror? As the Syrian soldier said to the ISIS cannibal, “what am I, chopped liver?”

Second half hour: Gordon Duff joins us to to discuss his new article The Delta “Deception” Raid on Syria. In that article, Gordon describes “an American raid destroying evidence of CIA involvement with ISIS and killing witnesses.” The raid allegedly captured a retired US general who was commanding ISIS forces. Gordon’s sources say that certain freemasonic Zionists (Christian as well as Jewish) are obsessed with destroying historical and archeological sites including the al-Aqsa Mosque in Jerusalem and a “second temple of Solomon” in Palmyra. It’s a heck of a story, and the scary thing is, it just might be true!