A must see animated movie based on the book by Antoine de Saint -Exupéry screened on May 22, 2015 at the Festival de Cannes.This delightful movie was one of my favorites at the Festival de Cannes. Mark Osborne Academy Award director of Kung Fu Panda, produced this animated film adaptation of Antoine Saint-Exupery’s 1942 novel which is according to him the 2nd most read book after the Bible.

It has been translated into more than 250 languages and has sold over 145 million copies worldwide. When I was in high school, I read the novel for my French class and it is widely read by students in France. It has aspecial messages of the child within and love and friendship and is a brilliant work which touches the emotions of its readers.

The animated story is about a Little Girl,( voice of Mackenzie Foy) who has a strict mother, Rachel Mc Adams, who insists she do many assignments to get into a new school. Her mother is preparing her for the grown up world. They move into a new house near the schoolwhere the Little Girl tries to complete all the assignments but then gets interrupted by her eccentric neighbor, an old man called The Aviator played by Jeff Bridges.

It is how the Little Girl rediscovers her childhood and learned not to grow up too fast. Marc Osborne’s favorite quote is what the Fox says to the Little Prince “It is only with the heart that one can see rightly…. what is essential is invisible to the eye.” “The movie also delivers the message ” that when you love someone they will always stay in your heart” said Makenzie Foy.

I learned much about the production of the movie by attending a great press conference moderated by Béatrice Thomas where I met the director, Mark Osborne, French producers Aton Soumache and Dimitri Rassam, Mackenzie Foy the Little Girl, Florence Foresti, the French voice of the Mother , Camille, a famous French singer and André Dussolier the French voice of the Aviator.

One of the challenges faced by Mark Osborne was to stay true to the novel. Mark received the book as a present from his wife 25 years ago when they had to be separated during their university studies.

The book became part of their lives. I asked him how long it took to produce the film and he told me 4 ½ years including post production. He lived in Paris for about 2 years to work on the movie and to keep the French culture and completed the movie in Canada. He finished the movie about a week before the Cannes film festival.

The production involved a mix of CG and stock motion handmadeout of paper. In the beginning Marc’s wife and son and daughter took temporary roles for the movie. His son became the perfect actor for the Little Prince. The film had a budget of 57 million Euros. 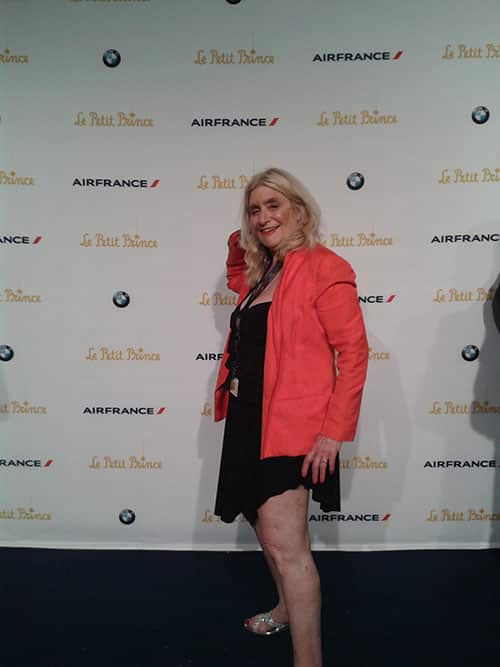 I had the honor and pleasure to be invited to the soirée for The Little Prince on the night of May 22. We were treated to champagne, wine and soft drinks and fantastic desserts catered by Le Nôtre. A live band played music for dancing.

We were offered a free photo of ourselves by a professional photographer and a present -a plush toy serpent reminiscent of the serpent in the movie and a kaladiscope.

This film will leave you with  important messages as well as provide you with extraordinary unique entertainment.