Home Life Dear FBI, I am going on vacation-jihad 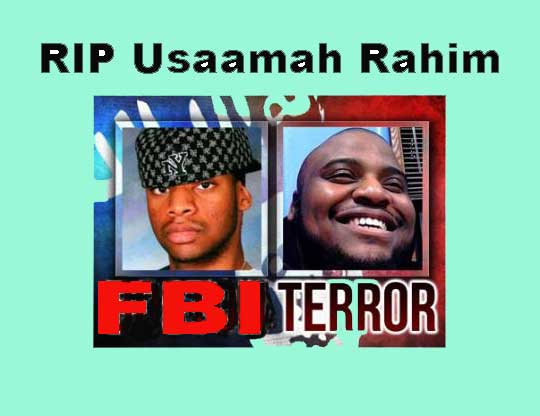 An open letter to the FBI, sent to https://www.fbi.gov/contact-us

To the Federal Bureau of Investigation,

I am an American Muslim. I understand that you guys want us to contact you if we see something suspicious.

Well, I see something suspicious. A whole lot, actually.

Maybe the recent murder of Usaamah Rahim in Boston by thugs posing as cops and FBI agents?

You guys claim that Rahim was ISIS and was planning to randomly behead cops. Yeah, right.

Greenwald blows that story to smithereens in every possible way. For starters: “The FBI/BPD’s claim — we had proof he was an ISIS-inspired terrorist about to unleash a terror plot — is totally inconsistent with their behavior in how they approached him and with their claimed reasons for doing so.”

As AP noted, on social media Rahim ‘spoke out against the kind of violence Islamic State extremists are fomenting across the Middle East,’ and ‘posted no bloody pictures and made none of the violent calls to arms many supporters of armed extremist groups espouse on social media.’ Moreover: ‘killing people is anti-Islamic,’ Rahim wrote, arguing a key tenet of the faith is ‘we do not fight evil with that which causes a greater evil.’

So Rahim was one of the vast majority of Muslims opposed to terrorism. (Polls show that Muslims oppose terrorism by greater margins than non-Muslims; and FBI statistics show that radical Muslims commit only 6% of terrorist attacks, less than radical Jews who commit 7% – and that’s not even counting the majority of “radical Muslim” false flags committed by, shall we say, non-Muslims.)

Then why did you extrajudicially execute him?

Maybe because he wouldn’t work with you, wouldn’t become an FBI informant? Maybe you murdered him for the same reason you destroyed the life of Tarek Mehanna?

Maybe you had your anonymous “informant” that you call “a third person” invent yet another FBI terror plot and pin it on an innocent man, Usaamah Rahim?

And maybe you decided to kill him, to hunt him down like a dog and pump him full of bullets, because his name was Usaamah and he was black, making him that much easier to demonize? And also to silence him, permanently, so he would never be able to tell the truth and defend himself?

Here is Usaamah Rahim’s Facebook posting about your tactics:

Damn FBI calling my phone! They just want any opportunity to drag a Muslim into some DRAMA … He wanted to meet up with me and “Talk.” HA! I said about WHAT? He said “Sir, we have some allegations regarding you …” I said “REALLY?” What ALLEGATIONS? He said “Well sir, thats what I wanted to meet up with you about. I came by your house a few times, but kept missing you.” I said, “If you want to summon me, you summon that COURT ORDER if your allegations you claiming are true, otherwise, BEAT IT” and then I hung up … funny, I was just telling my brother I heard some clicking noises on my phone. Every Muslim needs to treat these government cronies the same way I did, because if you let them get close, trust me, they’ll have you making statements about things that could get you jail-time, that in fact, you were preaching AGAINST i.e. violence and terrorism. Try again, monkey-boys …

Now I understand that Rahim shouldn’t have called you guys “monkey boys.” That’s an insult to monkeys.

But insulting monkeys is not a capital crime, at least last time I checked.

You sub-monkeys also claim that Rahim said he was “going on vacation” which is Muslim-speak for “going on jihad.” Any self-respecting monkey with a three-digit monkey-IQ would fall on the floor laughing at that one. But apparently the FBI takes it very, very seriously.

I have been a Muslim since 1993, earned an Islamic Studies related Ph.D. in 2004, yet somehow never heard that “vacation” and “jihad” are synonymous.

But come to think of it, it’s not such a bad idea.

I think I’ll go on vacation-jihad this summer.

But before you lose your heads, let me explain what jihad is and what it isn’t.

When we Muslims pray the five-times-daily salaat prayer, we perform a sort of yoga meditation embodying “islam,” absolute submission to God. At the moment the head touches the floor in full sujud we “let go” completely in an instant of deep relaxation and peaceful self-submission.

That moment of absolute submission to the perfect God who created this ultimately perfect universe is a moment of deep perfection and bliss. You could almost stay that way forever.

But no. Life is a test, and alongside absolute submission, God asks us to exert effort, to strive for the Good. So in between prayers, we have to perform jihad, “exertion” or “effort” or “striving.”

The “greater jihad” is exertion/effort/striving to be a better person.

The “lesser jihad” is exertion/effort/striving to defend the community.

I’ll be doing both when I go on vacation this summer.

As soon as Ramadan ends, I’m going to pack my family into my almost-20-year-old van and drive west…visit Denver, San Francisco, Portland, Seattle, Vancouver, and the Canadian Rockies. We’ll do some camping along the way. Visit some friends. Visit family.

But I won’t behead anyone.

My jihad is defending the Muslim, American, and global communities by telling the truth. As the Prophet Muhammad (peace upon him) said: “The best jihad is a word of truth flung in the face of a tyrant.”

Check out my We Are NOT Charlie Hebdo book tour schedule.

If you could send some undercover agents to surveil me at my talks, I would greatly appreciate it. Bigger turnouts are always better. They might even learn something.

I will also be happy to offer a 25% “undercover FBI agent discount” on my book We Are NOT Charlie Hebdo: Free Thinkers Question the French 9/11. Anyone dressed in plainclothes who shows me an FBI badge is eligible for the discount.

I’m also offering the same generous discount on Questioning the War on Terror, which gives you everything you need to solve 9/11 and arrest the real perpetrators.

In memory of Usaamah Rahim and the millions of other Muslim martyrs murdered by the Big Lie,

PS And by the way, please inform the Canadian authorities that the “FBI record” they used as an excuse to stop me from speaking in Toronto is bogus.