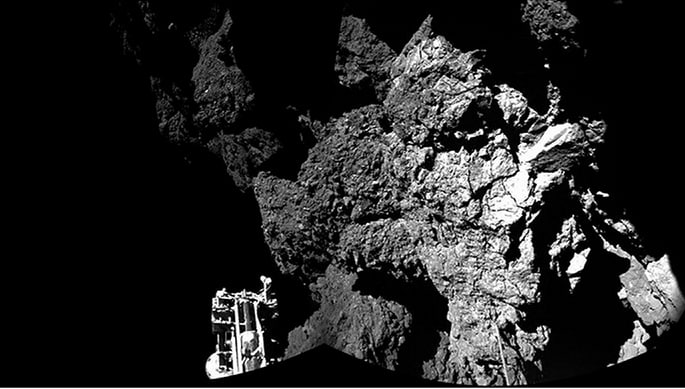 The Philae lander of the European Space Agency’s Rosetta mission is safely on the surface of Comet 67P/Churyumov-Gerasimenko, as these first two images from the lander’s CIVA camera confirm. One of the lander’s three feet can be seen in the foreground. The view is a two-image mosaic taken on Nov. 12, 2014. (Copyright: ESA/Rosetta/Philae/CIVA)

Comet lander Philae may be sitting on top of alien microbial life and is incapable of doing anything about it, according to leading astronomers. The comet’s characteristics such as a black crust and icy lakes suggest life could lie beneath the surface.

The comet, named 67P/Churyumov-Gerasimenko, has an organic-rich black crust, which could be due to living organisms making their way beneath its icy surface, astronauts said after studying the findings of the European Space Agency’s Rosetta spacecraft and Philae lander.

Director of the Buckingham Centre for Astrobiology professor Chandra Wickramasinghe and his colleague Dr Max Wallis from the University of Cardiff have said that comet 67P and others like it could be homes to living microbes – something close to the “extremophiles” that seen in the inhospitable parts of the Earth. 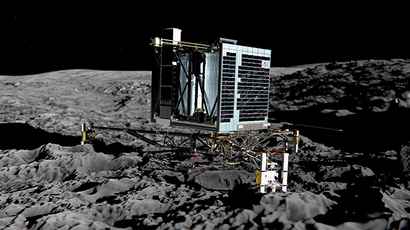 According to the two, it is comets like 67P that could be responsible for bringing life to Earth and potentially other planets.

Both astronomers have completed computer simulations, which showed that microbes could live in watery regions of the comet. And organisms with anti-freeze salts could survive at temperatures as low as -40 degrees Celsius.

The comet is described as a “rubber duck,”which consist of icy “seas,” black hydrocarbon crust overlaying ice and flat-bottomed craters with lakes of re-frozen water and organic debris.

Wickramasinghe interpreted the data received from the comet as proving that micro-organisms are “involved in the formation of the icy structures, the preponderance of aromatic hydrocarbons, and the very dark surface”.

“These are not easily explained in terms of prebiotic chemistry. The dark material is being constantly replenished as it is boiled off by heat from the sun. Something must be doing that at a fairly prolific rate,”Press Association quoted Wickramasinghe as saying.

The European space craft, Rosetta, which is orbiting the comet, has also picked up unknown “clusters” of organic material that could be viral particles.

“Rosetta has already shown that the comet is not to be seen as a deep-frozen inactive body, but supports geological processes and could be more hospitable to micro-life than our Arctic and Antarctic regions,”Wallis said.

However, both Philae and Rosetta lack the right equipment needed to search for evidence of life. Moreover, the two astronomers revealed that an earlier proposal to equip the mission with the right technology to detect life was reportedly dismissed as a joke.

“I wanted to include a very inexpensive life-detection experiment. At the time it was thought this was a bizarre proposition,” Wickramasinghe, who was involved in the planning of the mission 15 years ago, said.

Wickramasinghe argued that people should be more open minded towards the idea of alien life. 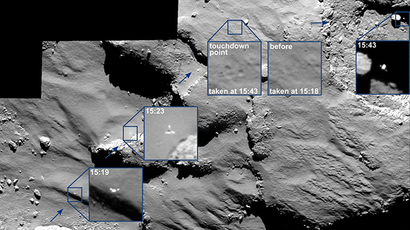 “Five hundred years ago it was a struggle to have people accept that the Earth was not the center of the universe. After that revolution our thinking has remained Earth-centered in relation to life and biology. It’s deeply ingrained in our scientific culture and it will take a lot of evidence to kick it over,”Wickramasinghe said.

Philae landed on the comet 67P back in November. The accomplishment was sensational, as the European Space Agency (ESA) wowed the world with Philae landing on the target and discovering carbon-based organic molecules before going into hibernation mode to preserve remaining power.

In the middle of June, Philae reawakened, after recharging its solar panels, and reported back. Currently it is around 176.7 million miles away from Earth, traveling at more than 73,000 mph.

The astronomers are presenting their theory at the Royal Astronomical Society’s National Astronomy Meeting in Llandudno, Wales.