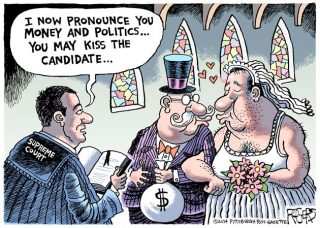 The unsealed indictments were the joint efforts of the FBI, the IRS-Criminal Investigation Division accusing the defendants with a range of crimes from wire fraud, racketeering to money laundering.

The figures involved were some $150 million, which these top executives were accused to have taken in bribes from sports promoters. Well that is quite interesting. The Justice Department brings indictments because these guys took bribes to support certain venues and certain events, while overlooking the substantial bribes political candidates receive as a matter of routine… business as usual.

How does this differ from the American election cycles when candidates seek billions not millions in political donations and contributions from big time rich people?

I am sure it has to do with candidates supporting certain public, financial and economic issues that the donors are pushing for.

Last April 2014, mega billionaire Israeli/American gambling mogul Sheldon Abelson summoned potential Republican presidential contenders to his headquarters in Sin City ( Vegas), where they “prostrated” themselves before him in what the Atlantic termed “The Sheldon Adelson Suck-Up Fest”.

The likes of Jeb Bush, John Kasich, Scott Walker and Chris Christie rushed to Sin City to pledge allegiance to Sheldon Adelson and to his only issue, Israel. Perhaps he threw in banning of online gambling, perhaps legalize prostitution, pimping, or even drug trafficking as part of the deal, only to make it “domestic” issues.

Not sure what would anyone call this, but I called it ‘bribe” — no different from the money the FIFA executive allegedly took from the sports promoter.

Why should we make a distinction between private citizens who take ‘bribes” to promote or act on a certain business transaction and not called it a “bribe” and haul them to jail when politicians take in tens of millions from donors by pledging to support a cause or to act on legislation benefiting the donors? I am sure many agree with me on these issues.

Recently Hillary Clinton, perhaps the most infamous of the “suck up” to Israeli-American Zionist moguls also pledged to give full and unconditional support to Israel. Her sponsor is Haim Saban who takes owns the Democratic party, as Adelson calls the shots for the GOP.

Hillary Clinton needs to raise $2 billion from her pro-Israel Jewish friends to make a successful run for the presidency.

However, not all of the “bribes” come from rich Israeli-American moguls. The Koch Brothers are also known to pour in hundreds of millions into political super PACs.

Recently these oligarchs who control our government celebrated the 4th anniversary of Citizens United, the Supreme Court ruling that gave corporations and unions unlimited and unrestricted rights to “bribe” political candidates.

Just imagine that someone running for a state office needs to raise at least $500,000 (bribes) from donors to even have a chance of winning.

In this country of ours the concerns of Americans, like updated infrastructure, affordable education, affordable health care, public safety, no more wars, an affordable heath care system, affordable housing, reinvigorating our industry, and bringing back onshore the more than $3 trillion of corporate money sitting in tax havens are non-issues to most candidates.

The issues forming the next national government are immigration and same sex marriage, and of course, leading all other issues is Israel.

In the last national election, more than $4.3 billion in “bribes” were raised and donated to state and national candidates. When a senator needs to raise $25 million for election, you know that he is paying back his sponsors. I called that “bribes”.

Americans need to rise up, just like the Greeks did, and vote “No” to all the oligarchs and to all the bribes in politics. Please keep this in mind in the next election.