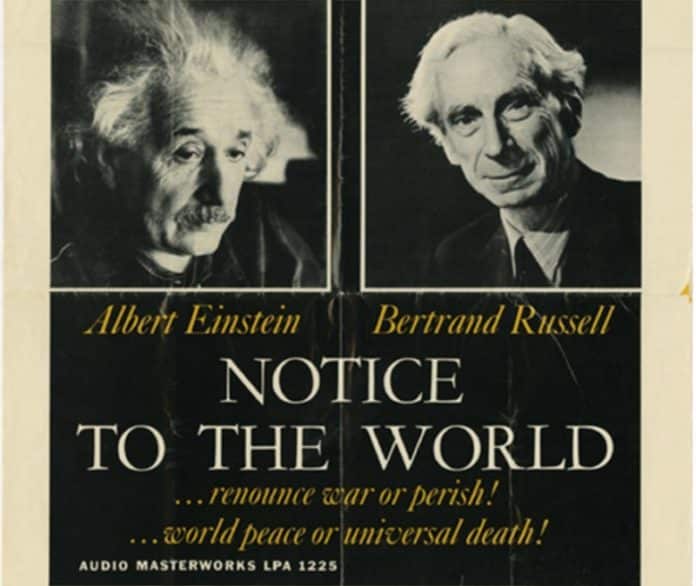 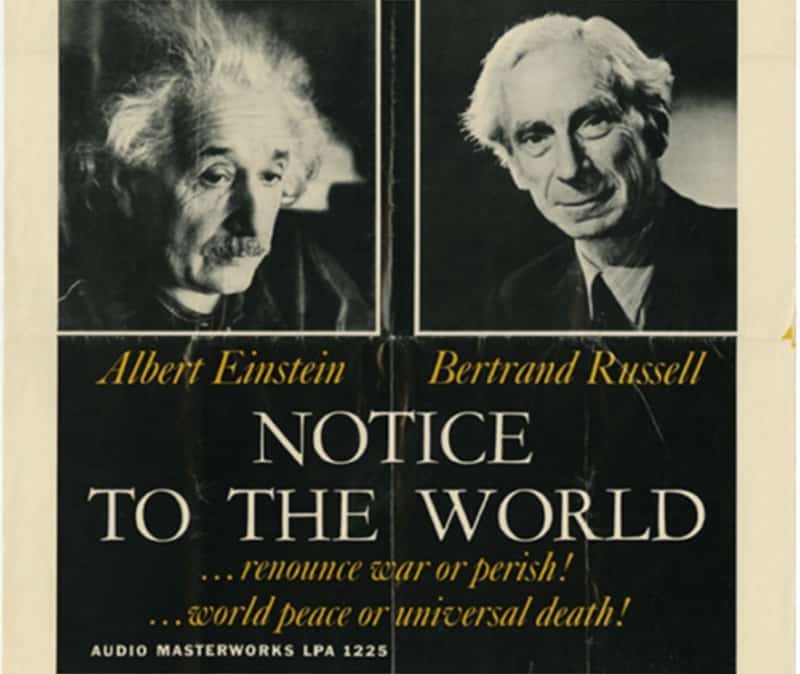 Sixty years after Albert Einstein and Bertrand Russell issued their manifesto about the growing threat of world war, the globe continues to face the prospect of nuclear annihilation coupled with the looming threat of climate change as well as Teilhard’s ominous warning ~ Love one another or you will perish: Allen L Roland, PhD

“We have reached a decisive point in human evolution, at which the only way forward is in the direction of a common passion ~ Either we must doubt the value of everything around us, or we must utterly believe in the possibility, and I would add, in the inevitable consequences of universal love.”  Teilhard de Chardin, Human energy

As Emanuel Pastreich brilliantly explains in Transcend Media Service / Foreign Policy In Focus ~ “It was exactly 60 years ago that Bertrand Russell and Albert Einstein gathered together with a group of leading intellectuals in London to draft and sign a manifesto in which they denounced the dangerous drive toward war between the world’s Communist and anti-Communist factions ….

They were blunt, equating the drive for war and reckless talk of the use of nuclear weapons sweeping the United States and the Soviet Union at the time, as endangering all of humanity. The manifesto argued that advancements in technology, specifically the invention of the atomic bomb, had set human history on a new and likely disastrous course…..The manifesto stated in harsh terms the choice confronting humanity: Here, then, is the problem which we present to you, stark and dreadful and inescapable: Shall we put an end to the human race; or shall mankind renounce war?”

But we must take little comfort in those accomplishments today for as Pastreich explains ~ ” The United States has completely forgotten about its obligations under the Nonproliferation Treaty, and the words “arms control” have disappeared from the conversation on security. The last year has seen the United States confront Russia in Ukraine to such a degree that many have spoken about the risks of nuclear war.

As a result, on June 16 of this year Russia announced that it will add 40 new ICBMs in response to the investment of the United States over the last two years in upgrading its nuclear forces.

Similar tensions have emerged between Japan and China over the Senkaku/Diaoyutai Isles and between the United States and China over the South China Sea. Discussions about the possibility of war with China are showing up in the Western media with increasing frequency, and a deeply disturbing push to militarize American relations with Asia is emerging.”  See article ~

But this time, as Pastreich correctly asserts,  the dangers of nuclear war are complemented if not reinforced by an equal, or greater, threat: Climate Change. ~ ” Even the commander of the U.S. Pacific Command, Admiral Samuel Locklear, told the Boston Globe in 2013 that climate change “is probably the most likely thing that is going to happen . . . that will cripple the security environment, probably more likely than the other scenarios we all often talk about.’’

But perhaps the warning voice of Teilhard de Chardin, who died 60 years ago, should also be added to those of Bertrand Russell and Albert Einstein in proclaiming that our trip on the dark side has only one obvious consequence ~ Extinction.

It is Teilhard,  the Jesuit priest. paleontologist and explorer of the soul whose life’s work was the reinterpretation of Christianity in the light of evolution, who stands impatiently at the summit of man’s quest for the ultimate truth proclaiming to all that God is love.

To Teilhard, not only is love the most universal, the most powerful and the most mysterious of the cosmic forces but it is also the primal and universal psychic energy ~ a Unified Field of love and soul consciousness whose primary property is the universal urge to unite.

Teilhard wrote in his last unpublished work ” “Le Christique ” (The promised Land ) of the inevitable consequences when this truth appears: “Sooner or later there will be a chain reaction ~ for the truth has to appear only once, in one single mind, for it to be impossible for anything ever to prevent it from spreading universally and setting everything ablaze”

And it is Teilhard who writes in Human Energy ~ ” Love one another. These words were pronounced two thousand years ago ~ but today they sound again in our ears in a very different tone. It no longer says only; Love one another in order to be perfect but adds Love one another or you perish … Therefore, despite all checks and all improbabilities, we are inevitably approaching a new age ~ in which the world will throw off its chains and at last give itself up the power of its inner affinities ~ the universal urge to unite and universal love”.

We cannot escape our destiny and it is divine. It will perhaps happen during our lifetime and we all have a part to play in it if we will but surrender to what is deepest within us ~ a Unified Field of love and soul consciousness or as Emerson wrote The thread of all sustaining beauty that runs through all and doth all unite.

Declaration on the 60th Anniversary of the Russell-Einstein Manifesto

In view of the growing risk that in future wars weapons, nuclear and otherwise, will be employed that threaten the continued existence of humanity, we urge the governments of the world to realize, and to acknowledge publicly, that their purpose cannot be furthered by a world war, and we urge them, consequently, to find peaceful means for the settlement of all matters of dispute between them.

We also propose that all governments of the world begin to convert those resources previously allocated to preparations for destructive conflict to a new constructive purpose: the mitigation of climate change and the creation of a new sustainable civilization on a global scale.

This effort is endorsed by Foreign Policy in Focus, the Asia Institute, and World Beyond War, and is being launched on July 9, 2015.