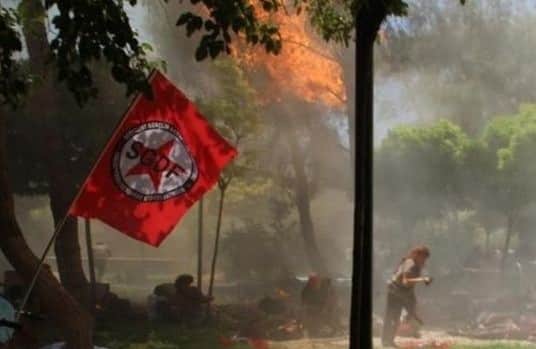 [ Editors Note:  It was just a matter of time before these bombings began in Turkey. I had been surprised at the delay as Turkey has been playing with fire for a long time now supporting the terror campaign against the Syrians as part of Erdogan’s Neo-Ottoman fantasy.

Of course there could be multiple suspects behind this particular attack as many Western and regional players have a finger in the ISIS pool of terrorists, able to deploy an attack anywhere they want, from a choice of ISIS sub groups. The Western regime change gangsters opened up Pandora’s box with their stupid strategy of using canon fodder, throw away young disaffected Arab men for regime destabilization on the cheap.

As with all the rest of Western aggression since and before 9-11, the long term costs have turned out to be huge. We could have bought friends several times over and still be way ahead of the game than where we are financially. But if you take a close look at who really did make all the money, and how it has become a long term conveyor belt fo them, you will see all the usual suspects.

Erdogan is on the suspect list to use this to trigger a crackdown on his opposition. I am not being nasty. This is just a standard tool that such people use when they feel it is needed. Both supporting and fighting a terrorist org seems to be the “in thing” now in Western geopolitics.

While we have a African leader on trial now for murdering 40,000 of his own people, no Western leaders have found themselves in the dockfor such things as they exempt themselves from such judicial proceedings simply by classifying their crimes behind a national security shield. This abuse of diplomatic immunity is a serious threat to all of us and no one is really taking about it… Jim W. Dean ]

At least 27 people have been killed and over 100 injured in an explosion that struck a cultural center in the town of Suruc, southeastern Turkey, near the Syrian border, the Interior Ministry said adding this was a “terrorist attack.”There are concerns the death toll could rise, the ministry said in a statement.

“We call on everyone to stand together and remain calm in the face of this terrorist attack which targets the unity of our country,” the ministry added.

“I saw more than 20 bodies. I think the number of wounded is more than 50. They are still being put into ambulances,” a witness told Reuters by telephone shortly after the blast.

“Ambulances and private cars are picking up the wounded. Many were killed – 20 or 30. I am going to the hospital to help out,” Adham Basho, a local politician, also said.

It is not immediately clear what caused the blast in the town, some 10km (6.2 miles) from the Syrian border town of Kobani, which was the scene of surprise Islamic State attacks that killed more than 200 people last month.

Turkiyegazetesi.com reports it appears to have been a cluster bomb explosion. Two senior Turkish officials told Reuters they have received evidence saying it was a suicide blast carried out by Islamic State militants.

“Our initial evidence shows that this was a suicide attack by the Islamic State,” one of the officials said on condition of anonymity.

The explosion targeted at least 300 young people of the Socialist Youth Associations Federation (SGDF), who had gathered in Amara Culture Center, Turkish media say. The young people were reportedly going to join a summer expedition to help rebuild Kobani.

“There was a very violent explosion, we shook. There was a conference happening,” Mahmut Boke, a municipal worker in Suruc, told Reuters by telephone.

Suruc Municipality posted on Twitter that “emergency blood” is need following the explosion.

The hashtag #SuruçtaKatliamVar (There is a massacre in Suruç) has appeared on Twitter following the tragedy. It has been retweeted about 12,000 times so far, according to topsy.com.