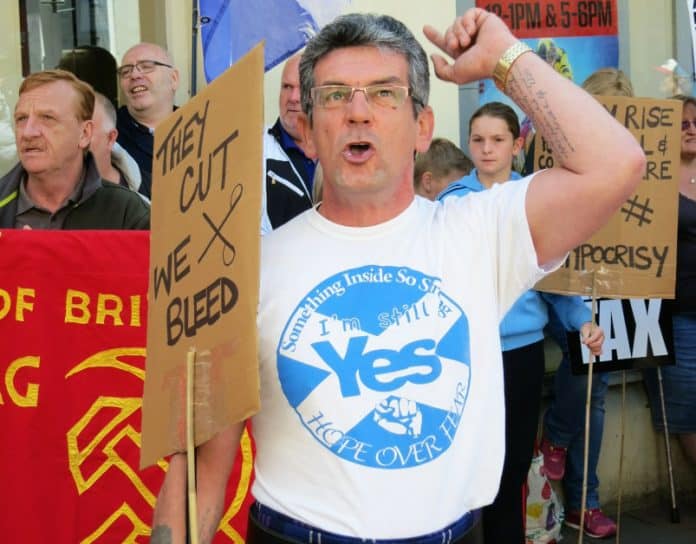 It was not your usual celebration to mark the launch of a new venture. While Secretary of State for Scotland David ‘Fluffy’ Mundell was opening a food bank upstairs from a baker’s in Dumfries town centre, noisy demonstrators gathered in the street outside demanding he came down to explain himself. But ‘Fluffy’ chose to treat his constituents with contempt and slink out the back door under police protection and into a waiting car.

I was witnessing another extraordinary moment in the Tories’ suicide mission in Scotland. Mundell, Conservative MP for Dumfriesshire, Clydesdale and Tweeddale, is the sole survivor of his species north of the border – their last man standing.

The irony of accepting an invitation from the Trussell Trust to open one of their food banks – when his government’s austerity measures and especially its welfre reforms have pushed more and more people over the edge into despair – seemed completely lost on ‘Fluffy’. Did he think endorsing the food bank would show his caring side?

At the same time Obama was giving the situation an extra sadistic twist by congratulating Fluffy’s boss, the warmonger Cameron, for keeping ‘defence’ spending at 2% of GDP – i.e. more than $60 billion. So countless Britons go hungry and their children are brought up in poverty to ensure our continued support for US-Israeli militaristic ambitions.

Over 1 million people – including almost 400,000 children – received three days’ food from Trussell Trust’s 400+ foodbanks in the last 12 months. The number of foodbanks launched rose by 5 percent last year, whilst numbers of people helped by foodbanks rose by 19 percent. Problems with benefits remain the largest driver. But the last year has seen an increase in numbers referred due to low income. Foodbank managers say that clients who are in work are struggling with insecure work, low wages and high living costs. Referrals to foodbanks due to sickness, homelessness, delayed wages and unemployment have also increased.

The Trust quotes a qualified teacher and mother of two as saying: “I have an 18 month old son and an eight year old stepson, I work part time as a teacher and my husband has an insecure agency contract. There are times when he doesn’t get enough hours of work, and we really struggle to afford food and pay the bills. The foodbank meant we could put food on the table.”

Foodbanks operated by the Trussell Trust are run in partnership with churches and communities. Last year, says the Trust, the UK public donated 10,280 tonnes of food. And nearly all foodbanks provide additional services alongside food to help people out of crisis long term.

The demo in Dumfries was supported by Cllr Pat Lee (Solidarity Scotland party) who travelled from South Lanarkshire. He told me that over 20% of Dumfries children are in poverty, and a similar percentage in Lanarkshire, thanks to Tory austerity policies. “We are here to hold Mundell to account for his hypocrisy.”

Lee recently quit the SNP (Scottish National Party) to join Solidarity Scotland. “I can return to following my political conscience – the fight for Socialism, social justice, workers rights and fairness – and I believe the vehicle to do this is Solidarity. There have been a number of times I have felt constrained by being held to the SNP whip.”

A disabled protester, Lesley-Anne McLelland, is reported saying: “It is absolutely ridiculous that so many people have to rely on food banks in Scotland in this day and age. We are the only oil-rich country in the world where people have to be fed using them.

“For Mundell to come and open this while his government is putting through Parliament more hurt and misery for people is disgusting. He didn’t even have the guts to face anyone who was here today.”

‘Fluffy’ Mundell has denied there’s any connection between food bank use and his party’s welfare reforms. However, the demands on food banks are increasing significantly as the Tories turn the screw.