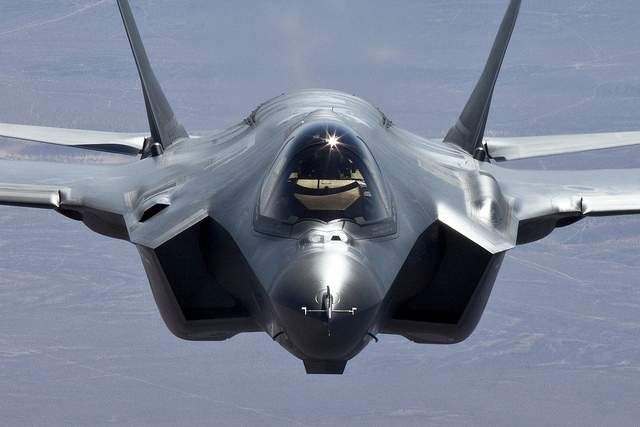 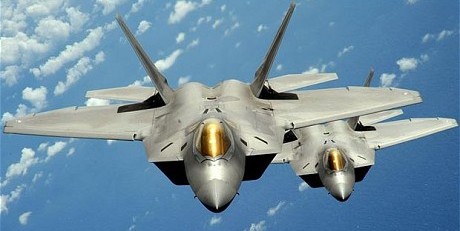 [ Editors Note:  This is a follow up to yesterday’s Air Force Secretary’s remarks where she admitted the F-35 problems that VT readers are well aware of. But she left out this combat test fight.

Pay special attention to the mention of the extra fuel tanks on the F-16s to slow it down, which would have jettisoned in a real combat situation. This is symptomatic of a long-hidden Pentagon scam, the rigging and faking of tests, especially on missile programs, to show “improved results” to get the problem out of the media spotlight and keep the money flowing for the never-ending fixes.

There is a dirty dance going on here with the CongressCritters, the Pentagon and defense contractors to always hoodwink the public on these white elephant cash cow programs, with the thin veil of cover that they “don’t want to undermine public confidence in their government’s competency”.

This is a cheap ploy to give it some national security cover to justify keeping screw-ups semi secret, as if all the world’s militaries are not already totally aware. Their fear and their goal is to avoid huge phone call campaigns going into the Congressional offices to chew their butts out.

So they are revealing to us where their Achilles’ heel is, but we are so distracted with so many issues coming at us every day, we rarely or never stop to take action. So they have us on the merry-go-round where things whizz by us and are gone before we can react. We have to break out of this cycle somehow… Jim W. Dean ]

The five-page brief written by an unnamed test pilot reveals that the expensive project suffers from serious design flaws that result in energy loss and limited maneuverability in dogfights.

According to the document obtained by War Is Boring, in a test that was conducted on January 14, near the Edwards Air Force Base in California, two F-35A and F16D fighter jets took on each other in a mock air battle.

The dogfight was specifically designed to test F35’s effectiveness in a close-range air battle, where the modern aircraft would perform extreme maneuvers in order to target and “shoot down” the F-16 whose pilot was assigned to evade the attack and kill the JSF.

However, things didn’t go as planned and the F-16, despite carrying extra fuel tanks to intentionally limit its maneuverability, came out victorious and humiliated the modern fighter in almost all categories.

In an instance where the F-35 fighter was able to defeat its aging opponent, it lost much more energy than expected as a result of maneuvers exercised by the pilot.

The cockpit also had a faulty design and limited the pilot’s viewing range which let the F-16 sneak up on the F-35 from behind without being spotted soon enough.

The extent of the problems with the fancy fighter jet has been so vast that even American military officials could not hide their disappointment.

US Air Force Secretary Deborah Lee James stated earlier this week that the JSF is costing way more money than they had “ever imagined possible.”

“People believed we could go faster, cheaper, better” but that strategy “has not worked as well as we hoped, and that’s probably the understatement of the day,” Secretary James added.

F-35, a developing project by Lockheed Martin Corp that has been going on for fifteen years, is said to be the highest-costing weapon in the history of the United States military, with a fleet of over 2400 units planned to be manufactured with an estimated cost of over $400 billion.

The Pentagon has also set aside another $1 trillion to maintain and operate the Joint Strike Fighter program over the course of its lifetime, as announced by the Government Accountability Office (GAO).